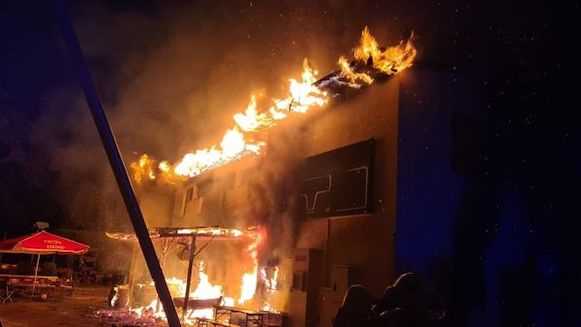 When fire ripped through the national hockey facility at Pratera, in the Austrian capital Vienna, on the 13 June, the large hockey community that made the stadium their home was left with nowhere to train and play. Smoke from the fire could be seen from miles around and it took eight hours to get the blaze under control.

The massive fire required 17 fire engines and 70 firefighters to finally make the area safe. The structural damage was immense but fortunately everyone in the building escaped unscathed. One employee had to be rescued by fire crew.

For the hockey organisation, the fire destroyed documents, furniture and computers as well as expensive specialist equipment and team uniforms.

The immediate impact was the cancellation of all hockey events at the stadium, including the men’s semi-final for the Austrian clubs championship and the U19 European Championships. In the long run, the club’s 100 year anniversary is due to take place next year, so the future of events marking that occasion were also under threat.

However, help from a neighbouring national association proved itself at hand. The Polish Hockey Federation (PZHT) is the recent recipient of the FIH Pablo Negre award for the development of hockey and on this occasion the PZHT decided that the money could be put to best use if they donated it to the Austrian Hockey Federation to go towards the rebuilding of their facility.

The magnificent gesture has received praise from people across the international hockey community.

General Secretary to the PZHT Piotr Wilkoński, explained why his organisation had stepped in so promptly and with such generosity.

“We have a close sporting and personal relationship with the Austrian federation. Often our teams play test matches.

‘The evening before this tragic accident, I met in Amsterdam with the President of the Austrian Federation, Walter Kapounek, and we talked about the joint Erasmus + Sport application and about the Hockey5 competition.

‘When, several hours after our meeting, I received a message and a photo from Vienna, the first thing I did was to talk to the members of our board and after accepting my proposal to transfer funds from the award we received from FIH, I called and passed this information to Walter.’

The generous and empathetic support given by the PZHT was met with a tide of gratitude from players and officials in Austria with many taking to social media to vocalise their appreciation.