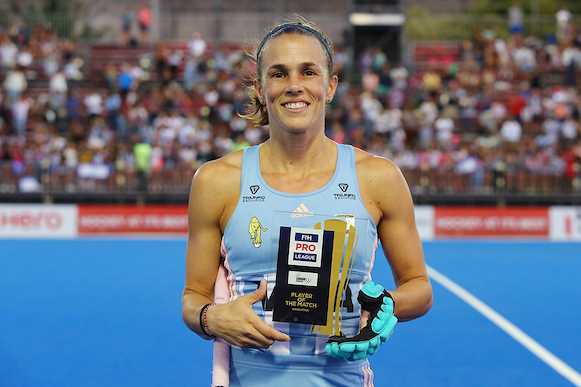 Just days after announcing her international retirement at the age of 36, we can reveal that Argentina legend Carla Rebecchi’s strike against USA in February has been voted as the third best goal of the FIH Hockey Pro League 2020 by fans using the Watch.Hockey app.

We caught up with Carla to discuss not only her goal but also her decision to call time on a sensational international career in which she represented Argentina on 317 occasions and scored over 160 goals, two of which came in the 2010 Women’s FIH World Cup final against the Netherlands as Las Leonas stormed to glory on home soil in Rosario.

Carla Rebecchi, your goal against USA on 8 February has been voted the third best goal of the 2020 FIH Hockey Pro League, by fans using the Watch.Hockey app. You must be delighted!
Carla Rebecchi: “I want to thank all of the people that voted for my goal and finishing third in the best goals of the [FIH Hockey] Pro League.”

What can you remember about the goal? You certainly showed quick reactions, and it helped Las Leonas to a 6-1 victory over your Pan American rivals.
Carla Rebecchi: “What I remember from the goal is that I think it came from a long, aerial pass, and I received it near the 25 [metre] line. I remember that I drove past some defenders and the ball went a bit long, so I tried to reach it. I saw that the goalkeeper was coming out, so I tried to reach the ball to get one last touch to get it past the keeper.”

You could not have known it at the time, but following your recent announcement to retire, it has turned out to be your final international goal for Argentina. That must be a strange moment for you.
Carla Rebecchi: “It is weird to know now that it was the last goal I [scored for] the national team, but it is a nice memory to remember that that was the last goal.”

The whole hockey world is obviously very sad to see you step away from the game, especially after your wonderful return to the sport a couple of years ago. Can you tell us about your decision to retire?
Carla Rebecchi: “It was a really difficult decision, to not go back to the national team. But it is something I have been thinking about a lot since the [2020] Olympics [in Japan] were postponed. That was really tough for me, because I was planning to retire there. Having a child, it is also very difficult for me to leave her for so much time. I really miss her [when I am away], and I want to spend time with her, so it is something I feel inside me. It was a very difficult decision because I would really have liked to get to Tokyo, but my first priority is my daughter. I really miss her, and I want to be with her.”

You are currently playing in Belgium, playing for Royal Antwerp HC. Are you enjoying life over there?
Carla Rebecchi: “I am really enjoying my life in Belgium. I came will all my family, so we are sharing this together. It is good to be playing again and competing again, as this year in Argentina we were not able to play our leagues, so it is nice to be playing again.”

Finally, if you could choose three of the greatest moments from your incredible career, what would they be?
Carla Rebecchi: “If I had to choose three moments from my career, I would say first is the 2010 World Cup in Rosario, Argentina. It was an amazing tournament, and we became world champions. We really enjoyed the tournament. Second, I would say the London 2012 Olympics, which was a really nice tournament. We got the silver medal, and it is a great memory. Third, I would choose the 2019 Pan American Games last year [in Lima, Peru, where Argentina won gold]. I came back to the team after becoming a mother and it was a really nice tournament. I really enjoyed it with the team, it was really nice.”

On behalf of the entire global hockey family, the FIH would like to congratulate Carla Rebecchi on an outstanding career that has left an indelible mark on the sport. Thank you for the memories!