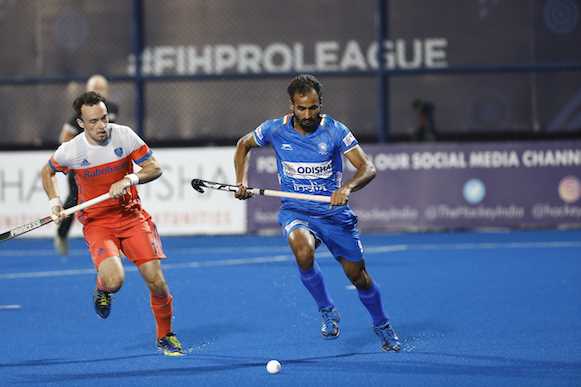 On 18 January 2020, the second season of the FIH Hockey Pro League began, with India’s men hosting the Netherlands at the Kalinga Stadium in Bhubaneswar. India needed just 13 seconds to mark their FIH Hockey Pro League debut, with Gurjant Singh clinically firing home a breakaway goal to give the home favourites the perfect start in what proved to a superb 5-2 victory over the Oranje.

Following Wednesday’s announcement that Carla Rebecchi’s goal against USA had finished in third place, we can now reveal that Gurjant’s quick-fire strike has been voted as the second best FIH Hockey Pro League goal of 2020 by the fans on the Watch.Hockey app.

To mark the occasion, we spoke to Gurjant Singh and India captain Manpreet Singh, with Gurjant being the first to offer his thoughts on India’s perfect start to the competition.

Gurjant Singh: “Thanks to everyone, and thanks to you! That goal was a really, really good goal, because we were just starting the match. For me, the best part was after the match I went to speak to the journalists and one of the media guys told me that I created a record! He said that it was the fastest goal for India and that I had broken the record. To me, that moment was really good.”

FIH: Well, it was incredible. It certainly one of the fastest goals in international hockey history – they don’t get much faster than 13 seconds! To do it in Bhubaneswar, in the FIH Hockey Pro League, the first match, it must have been quite a special moment for you.
Gurjant Singh: “Yeah, it was the first match in 2020 for India, and for me it was the best match. Last year I was injured and out for all of the international tournaments, so I played after a long break, so I was very excited for the match.”

FIH: Did you enjoy competing in the FIH Hockey Pro League? I know that the season was cut short because of the COVID-19 global health pandemic, but did you enjoy competing in those matches in Bhubaneswar? Was it everything you wanted it to be?
Gurjant Singh: “Yes. It was great for every team. We were enjoying the Pro League, up until corona [hit], and we are still waiting now for our next matches.”

FIH: So Manpreet, it was obviously an incredible moment for India to have done so well in their first FIH Hockey Pro League game, to achieve such a great result against the Netherlands. What are your thoughts about that?
Manpreet Singh: “From my point of view, it was a great match and we started very well, scoring in 13 seconds. It was an outstanding goal, and when I got to know that it was the fastest goal, it was such a proud moment for me and for the team as well. We really enjoyed that moment, and I was so happy for Gurjant that he scored that goal.”

FIH: Absolutely. It was a good 5-2 win against the Netherlands. It is fantastic to get results like that against the best teams in the world, something which must do a lot for the confidence of the India team.
Manpreet Singh: “That is true. It was our first match of the 2020 [FIH Hockey] Pro League and it gave us much confidence. After that we played a couple of good matches against Belgium and Australia. It was a really good start. Starting with the Netherlands, it gave us more confidence, boosting the team. It was so amazing, starting that match.”

FIH: Fantastic. Thank you both for joining us today and the best of luck for 2021.
Gurjant Singh & Manpreet Singh: “Thank you so much!”