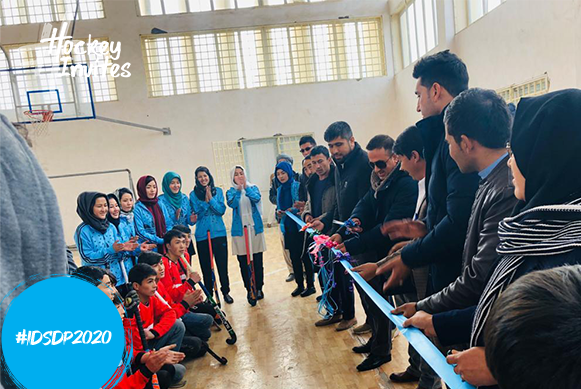 We continue our series of articles in which we highlight some of the great work being carried out by hockey communities across the world to promote peace and development.

For this article we turn to one of the most war-ravaged countries in the world – the Asian nation of Afghanistan – where, despite being at the heart of conflict since the 1980s, ordinary people just want to do normal things, such as go to school and work, socialise with family and friends and play sport.

Afghanistan is not just damaged by wars and terrorism, it also ranks as one of the poorest nations in the world. Despite this, it continues to play a range of sports at international level, with its national hockey association aspiring to make Afghanistan a competitive hockey-playing nation. The men currently rank 70th in the world, while the women’s team is still very much in its infancy and is yet to get a world ranking.

It is not just at elite level that hockey is making in-roads in Afghanistan: it is also being played in pockets across the country and participants are finding that regular hockey training and competing in local matches is beneficial to both their physical and mental health. The demands of the game are both cathartic in a society where stress levels are extremely high and it also offers the chance for social networking.

Playing hockey is not without risk, particularly for females. There are strict laws on what women can and cannot do but that is not stopping women going out and challenging the cultural norms. As more women and girls take up the sport, so they are driving social change.

Rukhsar Habibzai, Director of the Afghanistan Hockey Federation’s women’s national team, says: “Despite the many hurdles in our lives, such as transportation problems, cultural and societal norms, and financial instability, women hockey players are still able to play hockey on a daily basis and the team is also progressing and improving. The national women’s hockey team has struggled so far to reach this level and they desire to participate in international championships.”

It’s not just Afghanistan’s women who are empowered by the sport. Hockey is popular among men of all ages and children as well. Many leave their houses on a daily basis to play the sport. This is an important release that allows them to escape, even for a short while, the harsh realities of life that the country’s circumstances have imposed upon them.

Hockey as a sport resurged in the country in 2002, after a 30-year long gap due to the war with Russia. It is also a means of driving development within the country. The Asian Hockey Federation (AHF) organises coaching courses to support and develop the hockey playing community of Afghanistan.

From 2003 onwards, the AHF started providing equipment support to the country, which saw the distribution of free hockey equipment to thousands of participants in Afghanistan.

Taimoor Waqar of the AHF says: “The main missions of the Afghanistan Hockey Federation are to ‘Protect the Youth’ and to ‘Promote Peace’ through the sport of hockey in the country. Afghanistan is a shining example for the rest of the world when it comes to overcoming adversity and rising above it all through the institution of sport.”