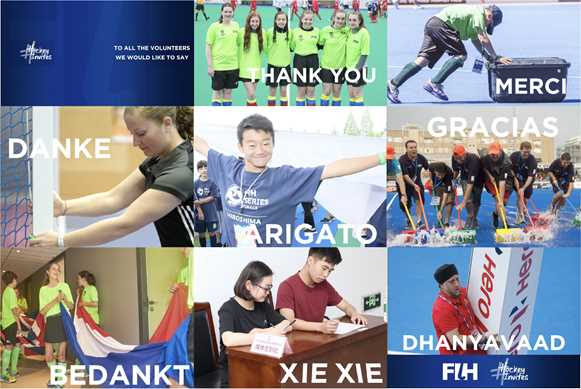 Across the five continental federations, volunteers work at all levels of the game to ensure that our sport runs smoothly for players, officials and fans. The United Nations-inspired International Volunteer Day on 5 December offered a chance for the hockey community to recognise the army of volunteers who dedicate large chunks of their time to the sport.

It is impossible to tell everyone’s story here, so, with the support of the Continental Federations, we have chosen just a few characters who reflect the diverse nature of both volunteering roles and the people who fill them. These are all people who have given years of selfless service to the sport, sometimes learning new skills and sometimes using the skills from their day job to affect change and development in hockey.

Trinidad and Tobago’s Willard Harris has spent more than 35 years involved in hockey at international level. He first started umpiring international matches in 1985 before graduating to the role of tournament director/technical official. Three Olympic Games, three World Cups, three Junior World Cups and two Commonwealth Games rank among his appointments and he is one of the most knowledgable people on the competition circuit. He is also keen to pass on his knowledge, which makes his current positions as Chair of the FIH Competitions Committee, Chair of the PAHF Competitions Committee and Chair of the PAHF Education Panel so apposite.

Zannat e Tabassum, from Bangladesh, manages to combine a busy professional life as an electronics and communications engineer with an equally full life as a hockey player and volunteer. Zannat is typical of so many people within the local hockey community as she combines her love of playing the sport, with a desire to get involved in helping run events. Again, like so many volunteers, Zannat is able to call on many skills that are part of her day-to-day work into her role within volunteering – problem-solving, communications and an ability to work under pressure are key qualities among volunteers. Zannat caught the volunteering bug when she worked at the 2010 South Asian Games in Dhaka.

Oko-Nikoi Dzani of Ghana has devoted time, energy and personal investment into the development of hockey in Ghana. As President of the Ghana Hockey Association – a position held for 15 years – Oko-Nikoi was the driving force behind the first sand-based astroturf in Ghana, which was constructed in 1999. Ten years later and Oki-Nikoi persuaded the Ghana government to support the construction of a water based pitch, stadium and hotel. With a passion for hockey that dates back to 1965, Oki-Nikoi has also been involved in forming clubs, raising funds to support the national team and serving time as Vice President of the African Hockey Federation.

Volunteers within hockey come from all sections of the population, with people of all ages offering their services. For many people who have retired, volunteering is a great way to get really active in a way that perhaps wasn’t possible while holding down a full-time job. Carlos Alberto Sales do Rosário is one such busy retiree. The Portuguese hockey enthusiast is hugely active within the Hockey Association of Macau. He arranges test matches for the national team, coordinates the officials and volunteers who stage hockey events and holds the vital role of treasurer of the Macau Hockey Association.

Ineke Blok-Kettenis is a semi-retired primary school teacher who spends her days away from the classroom working as floor manager for many European Hockey Federation (EHF) and KNHB events. Such is the regard in which the ever-smiling Dutch woman is held that organisers at the 2019 Belfius EuroHockey Championships in Antwerp requested that Ineke was appointed floor manager for the event. As a much-sought after volunteer, Ineke spends a lot of time away from home, so husband Wim also volunteers as a driver at events, ferrying VIPs and officials around and making sure Ineke always gets lift home at night.

Slovenian hockey has benefitted enormously from the help and support of Dutchman Alexander Vink. Alexander married and settled in Slovenia and now he shares all his knowledge of the Dutch club system with his club HC Moravske Toplice. Alexander was heavily involved in helping Slovenian hockey deliver the EuroHockey Championship III, Women in August 2019, including the tricky logistical challenge of organising the transport for the entire tournament.

Argentina’s Laura Pigretti has been involved in hockey in just about every aspect of the game and in just about every role, at club, country, confederation and international federation level. Currently she shares her immense knowledge via the FIH Academy Trainer/Educator programme and is a member of the FIH Development and Education Committee. Her many years of volunteering, in roles that ranged from team manager to judge to tournament director, saw her win the prestigious FIH 2016 Rene G Frank Trophy for Fair Play and in 2019 she was recognised with the PAHF Order of Merit.

When it comes to learning on the job, South Africa’s Josie Milella has benefited from working alongside some great tutors. In 2003 she began her career in volunteering under the expert eye of Sheila Brown, one of the most experienced and respected FIH officials on the circuit. That first appointment saw Josie working as team liaison for Belgium men at the FIH Champions Challenge. Every year thereafter Josie would find a tournament to be involved in. When South Africa hosted the 2017 Hockey World League Semi-Finals, she worked with FIH Events Manager Eduardo Leonardo, where she says, she learnt a huge amount about running events. This knowledge she took with her to the 2019 Africa Cup of Nations. This was yet again a new challenge, and a new learning opportunity.

For Bob Claxton, playing, coaching and administration have all continued hand-in-hand for most of his lifetime. Where many people hang up their boots and turn to purely administration and officiating, Bob has continued to play the sport at O60, O65 and O70 level. He is the perfect example of the claim that hockey is a sport for people of all ages. Among his many, many roles at state, national and Oceania level, Bob has been coach mentor to developing nations such as Vanuatu and Samoa; he has been active in driving up standards of coaching in Australia and he has led from the front as Secretary General and Treasurer if the Oceania Hockey Federation.

While hockey undoubtedly benefits from the work of its volunteers, there is also little doubt that volunteering is also a hugely beneficial experience for the volunteers. Talk to any volunteer, at any event, and you will hear tales of friendships made, skills enhanced, new and unexpected opportunities arising. Laura Pigretti sums it up: “It has been and still is, much work and responsibility, many dedicated hours, but above all it means enjoying hockey in all aspects and at all levels. We see the sport grow and change. We make world wide hockey friends. This is my extended family.”