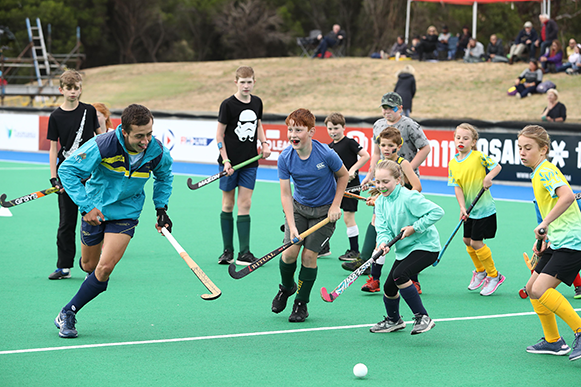 It is a red letter day on 20 November as two international awareness days hit the headlines. Firstly, the prize winners for the Olympic Day competition, which was held in June 2019, will be announced; and, at the same time, the hockey world is invited to embrace and support World Children’s Day.

Hockey communities from around the world responded to the ethos surrounding Olympic Day by organising activities and projects that really demonstrated hockey’s ability to change lives for the better.

Among the various Olympic Day activities were a beach hockey tournament in the Czech Republic, demonstrating that hockey can be played anywhere, on any surface. In Chile, a series of workshops was launched that offered the opportunity to play hockey to youngsters with physical and learning disabilities. Meanwhile, in Zimbabwe, art and hockey combined to raise awareness of the power and beauty of sport through an exhibition of children’s artwork.

Hockey as part of a healthy lifestyle was the theme behind Tonga’s Olympic Day project as a range of hockey activities were put on in primary schools throughout the island communities. And in Afghanistan, hockey was being introduced in several communities as a vehicle for peace.

Now the hockey community is invited to come together to embrace, support and celebrate World Children’s Day on 20 November. To mark this special day, national associations, clubs and individuals can get involved in any number of ways – through activities, tournaments, by launching initiatives or by holding events that raise awareness of the day.

World Children’s Day is a time to recognise that many, many children around the globe do not get to enjoy the things that we take for granted. The awareness day was first initiated by UNICEF in 1954 and it aim remains the same today: to help build a world where every child is in school, safe from harm and can fulfil their potential.

To this end, the FIH is calling on everyone in the world of hockey participate in World Children’s Day in some way. The motto of the UNICEF campaign is ‘the world is going blue’, so your participation could be as simple as wearing blue clothing while playing hockey.

Other ideas include inviting hockey role models to run coaching session – and ask them to wear blue; or encouraging children to draw their hockey dreams – using blue as the main colour.

And do share your World Children’s Day activities with the international hockey community. Using the #WorldChildrensDay and tagging @FIH and @UNICEF, post selfies, group pictures, video clips, comments and let’s spread the word. We know sport is a powerful tool for change, so let’s make sure that we do our bit to help make the world a better place for the next generation.