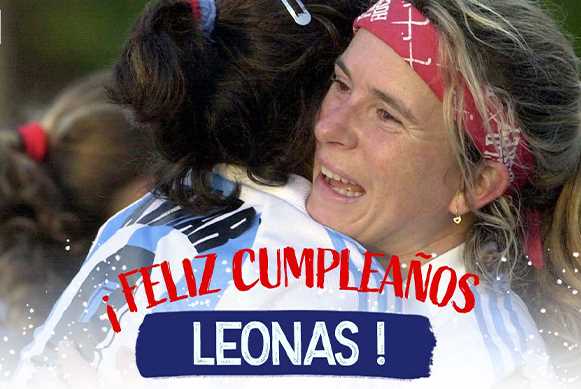 The stars are out to celebrate 20 years of Las Leonas

It was 20 years ago this month – 24 September precisely – at the 2000 Sydney Olympic Games, that the Argentina women’s national team adopted the symbol of the lioness as their own. Argentina took the silver medal after losing the final to the Hockeyroos, and it was at this point in their rich hockey history that the potent symbol of the lioness and the name Las Leonas became the rallying call for Argentina’s female hockey players.

Since then, the team and their army of fervent supporters have worn the lioness with pride and a fierce sense of ownership. As the teams stand and belt out the national anthem, fans with their faces painted as lions or waving their scarves with the lioness emblem join in with passion and enthusiasm. It is enough to make even neutral observers shed a tear or feel emotional in a manner that only sport and music can evoke.

One athlete who was synonymous with the lioness for much of her playing career was the eight times FIH Player of the Year Luciana Aymar.

Here, ‘Lucha’, explains just what the lioness means to Argentinians, particularly those lucky enough to pull on the famous blue and white shirt.

You can watch her full interview on the Watch.Hockey App.

Looking back, can you encapsulate just what pulling on the Argentina shirt means to you?
Luciana Aymar: Wearing the Argentinian shirt was one of the nicest moments for me. I’ve always aspired to be in the national team and to be able to wear the Argentinian shirt. Honestly, being able to be part of the generation that revolutionised women’s sport in our country is a great satisfaction. Today, there are lots of girls that strive to become part of Las Leonas. Of course, when one is chosen to be in the national team, as part of Las Leonas, you have to know that you have to transmit the same values that were at the heart of the creation of Las Leonas. Those values are: respect, humbleness, teamwork, solidarity, engagement …  those values are non-negotiable.

Why do you think the symbolic nature of the shirt became such a rallying point for the team and fans?
Luciana Aymar: The symbol of Las Leonas is very strong in Argentina as it was a real revolution when we played in Sydney. Despite not being able to win the gold medal, reaching a final against Australia – who were the most important and admirable team at that time, because of the quality of the players – it was a real revolution because we decided to have only one t-shirt with the logo on it and wear it in a moment where we were not doing well and we needed the points. It was an important moment and that was when Las Leonas revolutionised everything. In Argentina we started to have a much more important place in women’s sport, to position women better in sport. So, the symbol is very strong today. It has reached a point where we don’t refer to the “women’s national hockey team” but instead we say, “Las Leonas”.

When you hear the anthem and sees the team lining up now, how do you feel?
Luciana Aymar: The moment of the national anthem is one of the nicest moments to me. I guess, it is for every athlete, every hockey player, especially when you play at home. It is a very important and emotional moment, and when you are at home you get all the warmth from people. To me, it was one of the most important and emotional moments and one of the moments I miss the most.

Can you remember a match where you felt that the players pulled together and turned a result around because they all believed so passionately in the team and what it meant to be a Leona?
Luciana Aymar: An important moment for us as national hockey team was Sydney 2000. Not only because it was the first time we had the Leonas logo on the t-shirt but because it was the moment we consolidated our team to revert a situation. We could revert a complicated situation we had in that tournament because we didn’t correctly interpret the rules. We turned it into an opportunity, into something positive. From then on, we started to use the Leonas and Argentina managed to go to the finals after wining several matches and points. So, I think it is a key moment, not only for the Leonas revolution, for the symbol but also for being able to work as a team and the capacity we had to revert the situation.

Is the ambition of being a Leona enough of a motivation to help give a young girl the belief to break down the barriers that exist to females playing sport?
Luciana Aymar: I think that every girl that plays hockey will always have the ambition to be part of the national team. Today, women’s hockey is one of the most important sports in Argentina. Luckily, we were part of this positioning of female sports people in our country and today there are lots of girls who want to be an athlete and we have lots of important, admirable, and successful athletes in Argentina.

What do you think about the new Watch.Hockey app?
Luciana Aymar: I think that having an app is very important for international hockey. I think that hockey has always innovated and revolutionised. It has modified rules, changed pitch sizes, materials with which we play and it is always trying new things. For international hockey, it is exceptional to have an app and to continue to motivate us to be revolutionary in the sport, I am very happy that hockey has this app.

Luciana Aymar was joined by other members of the Argentina hockey community in celebrating 20 years of Las Leonas.

Former Head Coach to Las Leonas Agustin Corradini says: “The Las Leonas represent more than a national team, they are a symbol of female empowerment in a society that can be very macho. As women in sport, the Las Leonas are an inspiration to women and girls throughout Argentina and the world.

“Twenty years ago Las Leonas showed the pathway to empowerment to a whole new generation of women and have, ever since, played an important role in making our society more equal. For me it was a real honour to be the coach to a group of wonderful human beings and extraordinary athletes.”

Star striker and regular captain of Las Leonas is Delfina Merino. She is more than aware of the weight and honour of being a member of Las Leonas. “The symbol of the lioness for me represents a whole lifestyle, it is much more than purely about hockey.

“It is respect, it is humility, it is passion, it is dedication for what we do. It is about never giving up and, above all, it is about being a team.”

Agustina Gorzelany is a relative newcomer to the squad but she too reflects the idea that being a member of Las Leonas transcends what happens on the pitch. “This symbol [the lioness] stands for respect, solidarity, empathy, effort, companionships and humility. These are just some of the things that being part of this team gives you.

“But more than that, this symbol speaks for the union we have between each other. We pour all our energy and competitiveness into chasing a common goal. At the heart of our ethos, we believe in never giving up on our dreams and always to focus on being a better person than we were the day before.”

In an emotional letter, revered Argentine football coach Marcelo Bielsa - who is currently head coach at Leeds United in the English Premier League - has expressed his love and admiration for Las Leonas on their 20th anniversary. To read his thoughtful account, click here.