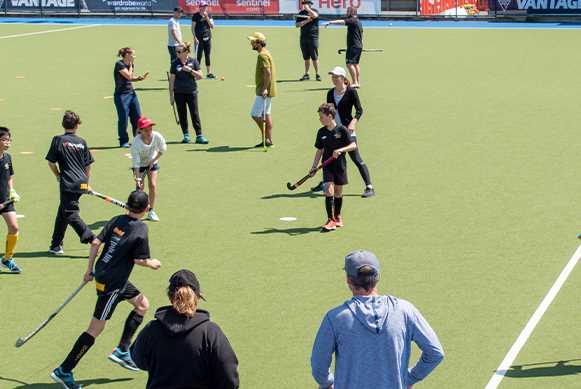 The on-going process of coach education

Learning from each other is at the heart of Hockey New Zealand’s coaching philosophy. It doesn’t matter whether someone is a coach or match official with more than 30 years’ experience or someone new to the game, there is always something to be learnt. Also demonstrating the national association’s willingness to gain breadth of support when it comes to supporting its coaches and officials, Hockey NZ invited officials and coaches from the world of rugby and netball to share their own knowledge and experiences during the delivery of the courses.

Three recent courses provide great examples of the level of importance Hockey NZ attaches to the training and education of its officials and coaches.

The Level One course was facilitated by Hockey New Zealand Coach Developers, Jolene Casey and Jude Menezes. It was a well-planned combination of theory and practical, concentrating on creating positive learning environments; developing communication and group management skills; and planning effective sessions.

The feedback comments from the assembled coaches were positive. “The coaches set a good example for us to follow. Content was good, enjoyed being challenged,” said one participant. Another course attendee spoke of the benefits of “meeting other coaches and understanding their way of coaching/developing.”

In preparation for their role as course facilitators, both Casey and Menezes had attended the early pilot Coach Developer Courses that Hockey New Zealand have been running since the start of 2019.

These pilots, which are run in alignment with the Sport New Zealand Coach Developer Programme and the FIH Hockey Academy Coach Educators Programme, aim to work with local and regional associations to identify and support coach developers.

Among the many skills that are honed through the pilot programmes are the ability to observe, question and listen before providing salient feedback.

The Coach Developer course in Palmerston North was the third pilot to be held, and a number of changes had been implemented based on feedback from the previous two courses.

Building on the momentum of the Coach Developer Pilot, Hockey New Zealand in partnership with Netball New Zealand instigated the first Sport NZ Match Officials Coach Developer. Seeking the same objectives and philosophy, the pilot allowed the information to be tailored specifically to how coach developers support coaches of match officials.

Through a mix of workshops, shared experiences and practical examples, all of which focused on observation; learning through ‘doing’; and self-reflection, the project aims to increase the knowledge and expertise of match officials.

“We were stretched, placed outside our comfort zone, but ultimately grew together as a group,” was the feedback from one of the candidates.

Hockey New Zealand Community Coaching Manager Nicole Youman explains the philosophy behind the Hockey NZ approach: “Hockey NZ are working hard to enhance the coaching space, to better support coaches to provide positive experience of players and opportunities such as the FIH Level One Coaching course are great development opportunities.”