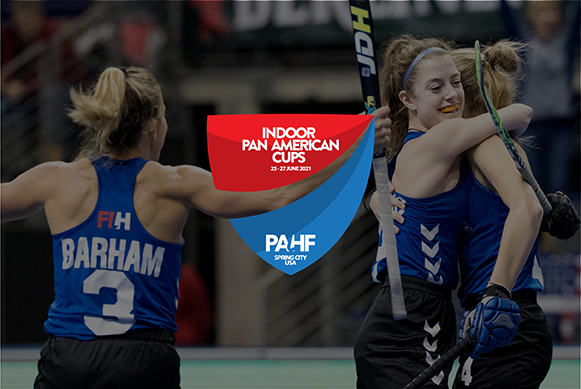 It is qualification time for eight indoor hockey teams from the Pan American Hockey Federation as they vie for the right to contest the FIH Indoor Hockey World Cup in Belgium next year.

Three men’s teams and five women’s teams will head to Spring City, Pennsylvania in the USA for the event, which takes place from 25-27 June.

In the men’s competition, Canada (WR:15), Argentina (WR:20) and USA (WR:42) will be facing each other in a double round-robin, followed by a final. The participating women’s nations are USA (WR:12), Argentina (WR:15), Canada (WR:17), Uruguay (WR:21) and Guyana (WR:31) and their competition is a single round-robin, followed by classifications matches.

The action begins for the men as top-ranked team Canada face Argentina. Then it will be the turn of USA to take on their South American rivals before the day’s action is completed by a Canada v USA encounter.

John de Souza is lead coach for the Canada men’s team. He explained the challenges that have faced his team: ‘The Canadian team has not had very much training time. The team will have been together for a total of 52 hours, which is not enough time to play international matches let alone a World Cup Qualifier. The team will have no match practice so has little room for error in its planning to avoid injury.’

While acknowledging the difficulties that all the teams have faced, Pat Harris of the USA is eagerly anticipating the event.

Harris had racked up a multitude of caps for USA both indoor and outdoor.  He also knows what it is like to play at an Indoor World Cup, having competed at both the 2003 Indoor World Cup in Leipzig and the 2011 event in Poznan, Poland.

‘The preparations for the tournament have been very limited. Most of us have not played indoors since last winter, while a small group of US-based players has been training domestically for the last month. The entire team will meet a few weeks prior to the tournament. Not Ideal, but I'm sure other teams are dealing the similar preparation challenges.’

In the women’s competition, the opening encounter is likely to be a feisty one as Canada (WR:17) take on Uruguay (WR:21). The rankings indicate that this will be a close match and it is one that Uruguay’s Constanza Barrandeguy is relishing.

“All the players love representing Uruguay and we consider this a very special tournament because we are finally returning to international competition after all the suspended games,” says the longstanding member of both the indoor and outdoor national team.

“We are a team that puts a lot of emphasis on human values, we are very strong in that respect. Also, we are convinced that we want to qualify for the Indoor World Cup, so those two values – respecting each other and the opposition, combined with a determination to win – those are the things I see as real strengths to the Uruguay side.”

Alison Lee has represented both the Canada women’s indoor and outdoor national teams since 2013 and, like Harris, has experienced an Indoor World Cup (Leipzig 2015). She echoes many of de Souza’s points: ‘Our preparation leading into this event has not been ideal. Heading into the original tournament date in March of 2020 we had just come off a training tour in Belarus and were able to play some of the European teams as they prepared for the European Championships. We felt extremely prepared heading into last March, this year it is quite a different story.

‘In spite of all that, we will be ready and raring to get back on the court! it’s never an easy battle, there are a bunch of solid teams coming out of Pan Am, but we are looking forward to getting back to international competition and we will be fighting for that spot at the World Cup.’

The team to beat in the women’s competition will be the title holders USA, who are ranked 12th in the world. The current men’s champions are Trinidad and Tobago, whose appearance this year has been curtailed by the pandemic, so a new champion will be crowned.

Listen to Pat Harris of the USA national men's indoor team and Constanza Barrandeguy of Uruguay as they discuss the Pan Am Indoor Hockey Cup on the FIH podcast Hockey Pod.