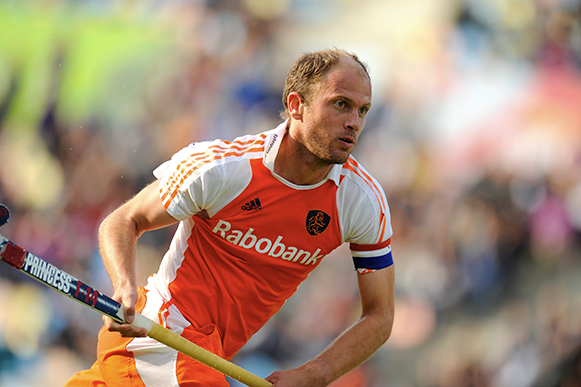 In Part 2 of our wide-ranging interview with one of hockey’s most revered players, Netherlands legend Teun de Nooijer talks about his memories of scoring the golden goal at the Utrecht 1998 Hockey World Cup in front of 15,000 home fans, and how the Oranje bounced back from the brink of elimination at Sydney 2000 before claiming a second successive Olympic gold medal.

De Nooijer – a three-time FIH Player of the Year who played a world record 453 international matches, scoring 219 goals – also discusses his co-trainer role with the Germany women’s national side, stating his great excitement about the team’s upcoming FIH Hockey Pro League matches against Belgium, which will be played in Dusseldorf later this month.

To score the golden goal in the final of the 1998 Hockey world Cup, which was played on home soil, must have been an incredible moment for you, especially as you were still only 22.
Teun de Nooijer: “I was still the youngest on the team. Actually, two years later at [the] Sydney 2000 [Olympic Games] I was still the youngest on the team. We had a pretty experienced team there. The final in [Utrecht] was crazy, but the whole tournament was crazy. In the group phase we faced Germany and lost 5-1. That was pretty hard on home soil to lose like that. But in the semi-final we faced the Aussies, and we won 6-2, which was another crazy, bizarre game.

“In the final, it was 15 minutes from the end and we were 2-0 down, and we turned it around to force extra-time. Just two minutes from the end [of extra time], we got a corner and the rebound went in. You can see it on the television footage, I sprint away after the goal to the fans and then in one moment, because it [golden goal extra-time] was pretty new back then, the game ended. First, I was enjoying that we were leading 3-2 with two minutes still to play, but then I realised it was finished! I fell on the ground and the whole team was on top of me, and the staff! It was a bizarre moment.”

Your journey to winning your second Olympic gold, at Sydney 2000, was far from straightforward. Can you tell us about that?
Teun de Nooijer: “When I look back at that tournament, I think we had an unbelievably good team, and an unbelievably experienced team. At 24, I was the youngest on the team. There is no team now where that is the case, I think. We really, really struggled. We started okay, but were a little bit unlucky as well because we scored a goal against Malaysia that hit the back-bar and came out, but the [umpire] thought it was against the bar. It was disallowed, and we had a 0-0 because of that. We dropped a lot of points, and then in the end, I think we needed a win against Pakistan. We actually played pretty well, creating a lot of chances but just didn’t score. Pakistan did, so we lost that game.

“After that, Germany needed to play GB [Great Britain]. Germany had a great team, so we all thought that we were out of the tournament, no semi-final place for us. Germany will win this game; it was a big chance for them to go through. But it just fell our way. GB won, with Callum Giles, the penalty corner specialist, having a chance five minutes from the end and he scored to make it 2-1. We were all in our little houses watching the game. Players from the team were already preparing to go out, because we were not having a semi-final, so we were going to go into town and have a beer! But then it just turned around. It was crazy.”

You are back working with international hockey players again. Can you tell us about your latest role?
Teun de Nooijer: “At the moment I am one of the co-trainers with the Germany ladies team. The first games are coming up now, actually, the [FIH Hockey] Pro League games will be in September, in Düsseldorf against Belgium, so we are really looking forward to that. Like everyone, I’m looking forward to having games again, to play hockey again, come together again and to go forward again together in a good direction. I think everybody has been missing hockey at the top level. I watched some Champions League [football] in recent weeks. It was nice of course, but you miss the spectators and the full crowds. Hopefully it is coming back soon, and a vaccine for COVID [will be found]. Let’s hope everything works out and that the hockey world is able to come together again.”