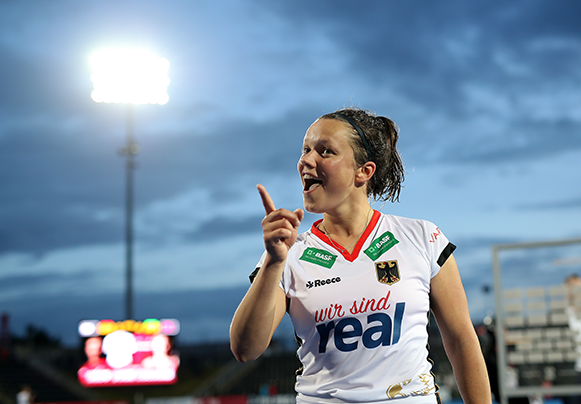 Team means everything to Stapy

Charlotte Stapenhorst is currently one of the German national women’s team greatest assets. She first burst onto the senior international hockey stage as a talented 18 year-old in 2013, scoring her  debut senior goal against Korea at the Hockey World League Finals in Argentina.  Since then, Stapenhorst, or ‘Stapi’ has become a goal-scoring dynamo, slotting the ball into the goal with regularity throughout her 99-match international career.

A bronze medallist at the Rio 2016 Olympic Games, Stapenhorst scored the goal that set Germany to victory over New Zealand in the bronze medal match. At the 2018 Vitality Hockey Women’s World Cup in London, Stapenhorst looked to be on track for a great tournament as she mesmerised defenders with some impressive 3-D skills and scored three goals in Germany’s opening two matches, including a scorcher against Argentina. German’s early exit from the competition meant Stapenhorst’s talent in front of goal wasn’t given full airing on that occasion.

She was back on form to score six goals during the FIH Hockey Pro League in 2019, including a three-goal spree against Belgium. With the current season on hold due to Covid-19, Stapenhorst is one of the many, many athletes trying to find ways to stay fit and healthy while activities are restricted. While the return to competition is calling strongly, for Stapy, the chance to once again be part of the team is the thing she is most looking forward to.

Who or what first influenced you to pick up a stick and play hockey?
Charlotte Stapenhorst: That is quite easy, my two brothers started playing just before me, here in Berlin. They brought home trophies and stuff so it was easy for me to say “I want to do that”. That is the reason why I started.

Who has been the biggest influence on your career?
Charlotte Stapenhorst: Apart from my brothers who first got me there, I think my idol is Natascha Keller. I think she was one of the best players in the world and watching her particularly mad eye want to play like her, or at least try.

If there was one sentence to sum up your playing style or attitude on the pitch, what would it be?
Charlotte Stapenhorst: My kind of style? That is difficult! I love to score goals and help my team out with that. And my 3-D skills aren’t bad.

What moment on the pitch are you most proud of and why?
Charlotte Stapenhorst:My most proud moment on the pitch with the team was the Olympic bronze medal [match against New Zealand. Germany won 2-1]. Nothing has even come close [to that]. For myself, it was a disappointing World Cup in 2018, especially when we dropped out of the quarter-final against Spain, but I had a really good game against Argentina and a pretty good goal. I like thinking back at that.

It has been four years since Rio 2016, how have you changed as a player in that time?
Charlotte Stapenhorst: My style of play has changed quite a bit I think. I am taking much more of a part in the game. At the Olympics my main goal was defending, defending, defending and, if possible, do something forward. That didn’t really work out. In those four years I have grown up quite a bit, not just physically but also in my style of playing on the pitch. Receiving balls, passing and seeing my team mates and making better decisions about when to go on my own, when to do my 3-D stuff and passing. That’s quite a lot of change.

The Covid-19 situation has obviously impinged on everyone's preparations but what are some examples of activities that you and the squad have used to keep a sense of 'team' throughout the lock-down period?
Charlotte Stapenhorst: The Covid-19 situation is pretty difficult for all teams. In most countries it is even worse than here in Germany - in some countries you can’t go outside at all. As a team we have Zoom [online video programme] meetings and try to do stuff that we can do at home without any materials [equipment]. We do half hour workouts together, that is the kind of stuff we do. Our yoga teacher is also doing Zoom meetings with us, so we do stuff like that. Otherwise, every player has their little gym at home, at least trying to stay fit. Obviously, in these difficult times, it is not the same but we do our best.

What part of returning to playing after this enforced break are you most looking forward to?
Charlotte Stapenhorst: I’m most looking forward to seeing the girls, that is easy. It is not even about playing hockey, although I love it, but it is the thing around it as well, like the coaches and staff and going on tours and just actually living with them because we spend so much time together. It is not just playing hockey on the pitch but also just seeing the girls again.