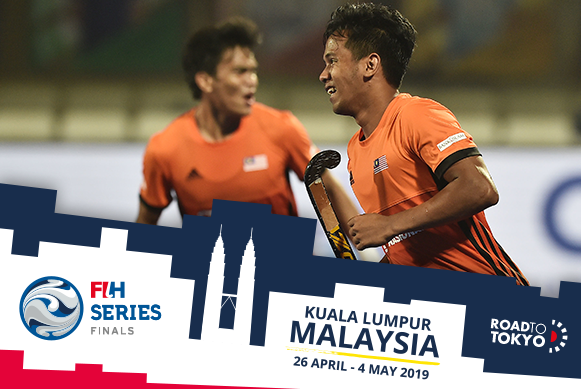 There is just one month to go until the first of the FIH Series Finals bursts into life and what better place to start the action than in the vibrant, colourful, welcoming and hockey-mad Asian country of Malaysia. The event takes place in one of the world's leading global cities and, with the Petronas Tower dominating the landscape, this is all set to be a thrilling opener to three months of Series Finals hockey action.

The opening event – one of six FIH Series Finals [three men’s and three women’s events] – takes place from 26 April until 4 May in Kuala Lumpur. For the teams taking part this is the next stage in the challenging but thrilling road to the Olympic Games Tokyo 2020.

From Kuala Lumpur, and all the other FIH Series Finals events, the top two* placed teams will then earn the right to compete in the Olympic qualifiers. For the men’s teams of Austria (World Ranking:19), Belarus (WR:31), Brazil (WR:27), Canada (WR:10), China (WR:14), Italy (WR:32), Wales (WR:24) and the host nation Malaysia (WR:13), this is an opportunity to get one step closer to take part in the XXXII Olympiad in Japan.

In readiness for the competition, the Malaysia Hockey Confederation has laid a sparkling new turf, which will provide a stunning surface upon which the athletes will compete.

The National Hockey Stadium in Bukit Jalil was re-laid as part of an upgrade to the old pitches that were on the same site. Both the men’s and women’s national teams will have played on the surface before the FIH Series Finals take place. The stadium is the perfect venue for the hockey spectators to come along and support their teams in this inaugural event.

Kuala Lumpur itself will be a fantastic backdrop for the competition. The capital of Malaysia has been named a ‘Seven Wonder City’ because of its cultural, architectural and social achievements. It ranks highly as a ‘safe city’ in terms of crime and has been rated the second most ‘liveable’ city in Southeast Asia after Singapore. It is also home to the iconic Petronas Towers, which are the tallest twin towers in the world.

Malaysia has a proud tradition of holding major sports events. Most notably, in the past few decades, Kuala Lumpur has played host to the 1998 Commonwealth Games and the 2017 Southeast Asian Games. And currently, like in 2018, Ipoh is the scene of the Azlan Shah hockey tournament.

The FIH Series Final will consist of a two-pool round, with the winners of each pool qualifying for the semi-finals. The remaining three teams in each pool will play cross-over matches to decide who qualifies for the remaining semi-final places. The winners of the semi-finals will go through to a grand final and play the FIH Olympic qualifiers, therefore continuing on with their Olympic journey.

* If Japan, Scotland or Wales finish in the top 2 of their respective pools, they will not secure a place in the FIH Olympic qualifiers. Japan have already qualified as both host and winners of the Asian Games; for Scotland and Wales, the reason is that England are the nominated country for Great Britain’s qualification pathway. If any of these three teams do finish in the top 2, the team that finishes third does NOT automatically qualify for the FIH Olympic qualifiers. Any such additional place is determined by the FIH World Rankings as at the completion of the continental championships (8 September 2019)