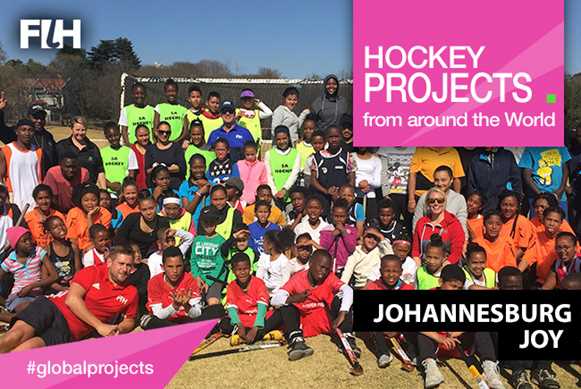 Jessie Baines is one of the coaches who runs the Saturday coaching clinics at Johannesburg University. As she explains to our reporter, more than 140 children aged from as young as four run around with a ball glued to their sticks as they practice dribbling, turning and quick changes of direction. The grass pitches are well-maintained and flat and the coaches have divided them into smaller pitches so each age/ability group has its own training area.

The skill level is impressive. One very young girl, whose stick is nearly up to her chin, does a neat reverse stick pass; a boy in his early teens keeps a ball bouncing on his stick for two minutes without falter. In the background a competitive match is being played between two girls teams.

But Jessie knows that what she and the other coaches give to the kids is so much more than an education in hockey. These are children from poorer families of South Africa and many have travelled for up to four hours to get to the training session. It is one example of sport making a difference to children’s lives.

"We use hockey to open their eyes and make them see there is a better future,” says Jessie. “By getting out of their own community and meeting people here, they see there are more opportunities, why they can even be paid to be hockey players now if they are good enough, they all want to put on the national shirt and be internationalists.”

The initiative is having great results, with nearly 1,000 children and youths playing competitive hockey in hockey festivals over the course of the season, with more than 200 additional mini-games organised in the same period. The project also received a large amount of hockey gear that was donated by various organisations, clubs and schools.

But the challenges faced by both the project organisers and the participants themselves remain. There is a lack of equipment, despite donations; the numbers far outweigh the facilities available; and transport to the university is an issue for most children.

Talking to the FIH reporter, one young girl said that she sleeps over at a friend’s house the night before as she lives a long way from the pitch, many of the children have been coming to the hockey sessions for the past three years, leaving home before dawn to get there.

The hockey coaching sessions meet many objectives. Jessie wants to see her charges make the state and provincial sides, but she is also keen for the children to socialise and develop as people as well as future sports stars.

“We want children to both enjoy the game and see the bigger picture,” she says. As the children flock around the FIH staff showing their hockey skills to an appreciative audience, there is no doubting the positive impact the initiate is having.

This project is very much in-line with International Hockey Federation's 10-year Hockey Revolution strategy which aims to make hockey a global game that inspires the next generation. For more information about the Hockey Revolution, click here.