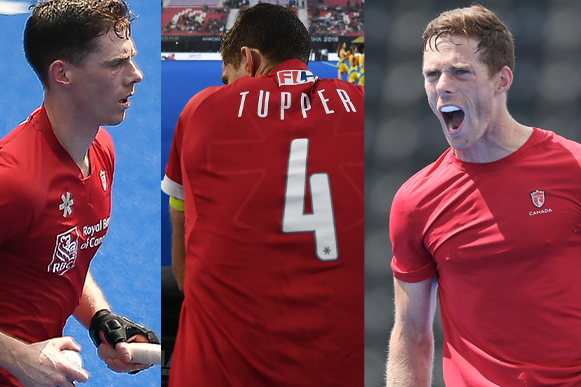 With over 300 international appearances in a career that has spanned some 15 years, Canadian captain and central defender Scott Tupper is one of the most well-respected figures in the sport and has certainly enjoyed plenty of wonderful moments during his time with the Red Caribous.

In 2007, a 20-year-old Tupper, then playing in midfield, was part of the Canada squad that stormed to the gold medal at the Pan American Games in Rio de Janeiro, Brazil, beating Argentina in a dramatic penalty stroke competition after the title match finished with the scores locked at 2-2. If someone would have told him that over the next 13 years he would attend two Olympic Games, two World Cups, three Commonwealth Games as well as win silver at a further three Pan American Games and two Pan American Cups (not to mention becoming Canada’s captain and being named as Canada’s flag bearer at the 2019 Pan Am Games in Lima, Peru), he would have struggled to believe it. Following his team’s qualification for the Olympic Games Tokyo 2020, now delayed by one year, there is at least one more mammoth competition yet to come.

A tireless, combative defender with a huge overhead pass and a mean penalty corner drag-flick, Tupper – who won Germany’s Bundesliga with Der Club an der Alster (Hamburg) in 2011 – remains a vital component in Canada’s armoury, a player capable of holding his nerve in the biggest of moments.

Away from his role with the Canadian team, Tupper is a member of the FIH Athletes’ Committee, a collection of current and former players who act as a liaison between the FIH and the Athletes to ensure that the latter has a voice in the FIH decision making process. Additionally, Tupper recently completed the online FIH Level 1 coaching course, ensuring that he has plans to remain very active in the game one his playing days have come to an end.

“The FIH coaching course was a great experience, especially during the quarantine time”, said Tupper, speaking off-camera. “The FIH Academy Educators, Bernardo Fernandes and Mike Irving, did a fantastic job facilitating it and created a real classroom feel despite having attendees tuning in from around the world. I want to coach when my playing days are done, so it was a great opportunity to put some time towards that and do some quality learning from home. I’d recommend the course to anyone who either coaches or is looking to start coaching in the future.”

Speaking to FIH from his home in Vancouver during the COVID-19 lockdown, Scott Tupper discusses his career to date and offers some great advice to young players aiming to make the most of their abilities.

Hi Scott, thanks for talking to us. You have enjoyed some wonderful times during your 15-year playing career with Canada. How do you reflect on these incredible moments?
Scott Tupper: “Fifteen years, it certainly sounds like a long time. It sounds maybe a little bit longer than it has felt! I’m just really thankful to have been able to be a part of the Canadian team for a good length of time, and to have a little bit of success as well. I’ve always cherished playing hockey for Canada, and I continue to do so. Mostly, I’m just really thankful and proud to be able to represent Canada and play hockey.”

Who or what first influenced you to pick up a stick and play hockey?
Scott Tupper: “I was first encouraged to pick up a stick and play hockey by a friend of mine, so no-one in my family – my parents or older sisters – played the game, but when I was six or seven years old, my close childhood friend Philip Wright actually got me into it, because his dad (Lee Wright) actually played for Canada at the Olympic Games (Tokyo 1964 and Montreal 1976). So, they invited me out to Vancouver Hawks, the club I grew up at, to train. Obviously, I enjoyed it and stuck with it throughout the years. Phil and I, and his older brother Anthony, we all ended up playing together on the national team, so it was really quite a cool thing but a little bit unique not having anyone else in the family playing the game.”

Who has been the biggest influence on your career and why?
Scott Tupper: “Like most athletes, I would say my parents, in terms of the encouragement throughout my youth and even now, to continue playing hockey and to continue enjoying it. Also, their support in terms of paying for equipment, helping to pay for trips and stuff like that – they’ve had a really big impact on me, and allowed me to continue to play hockey and do well.”

If there was one sentence to sum up your playing style or attitude on the pitch, what would it be?
Scott Tupper: “I would say, not very fast, average skills and really competitive! I would say that nobody is going to mistake me for the most technically or physically gifted guy, but maybe I’ve pieced it together a little bit with some competitiveness and a little bit of desire to win the game.”

What moment on the pitch are you most proud of and why?
Scott Tupper: “I’d say the moment on the pitch I feel most proud of would be going back to 2015 when our team effectively clinched our Rio [2016 Olympics] qualification at the World League [Semi-Final event] in Buenos Aires. That was a really great tournament for us, to beat a team like Spain [3-2] early in the tournament was a huge achievement for us, and then to have a little bit of a crazy game with New Zealand [in the competition quarter finals], where we tied 0-0 and then had a seemingly never-ending shoot-out [Canada won 7-8 after 14 attempts each], to come out on top there was something I was incredibly proud of. I’d been fortunate when I was younger, in 2008 and 2010, to play in the Olympics and then the World Cup, but then we missed out in 2012 [Olympics] and 2014 [World Cup]. Leading into Rio, I was captaining the team and one of the more senior guys, and I really wanted to help lead Canada back to major events, so to be able to do that with the guys, and have that achievement is certainly something I was proud of.”

What would be the best advice you could give to aspiring young hockey players?
Scott Tupper: “Watch as much hockey as you can. I think it is really important to see what the best players in the world are doing, so if you live in a place where you can go and watch games locally, get out and see some great hockey. If not, and you are like ourselves here in Canada where it is a little bit harder to find, get online. There is so much stuff you can seek out, make sure you are watching highlights from the [Dutch] Hoofdklasse or highlights from some of the big FIH tournaments. Hopefully that can translate into your game and help you out.”

What have you been doing to stay active and healthy during the ongoing COVID-19 global health crisis?
Scott Tupper: “I’ve been trying to get outside as much as I can to do running and stuff like that. We are a little bit fortunate here in Vancouver, where we are surrounded by a lot of areas where there are forests and trails. You can still have some pretty effective fitness sessions, which is good. We are a little bit on our own for strength stuff, so just doing a lot of bodyweight exercises with push-ups and planks, lunges and all that sort of stuff, so keeping fit, and hopefully we’ll be in a good spot when we do get back to playing hockey.”