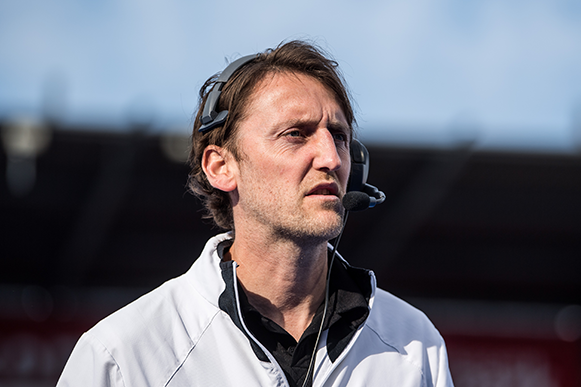 Xavier Reckinger is Head Coach to the German national women’s team. Under his leadership, Die Danas won silver at the 2019 European Championships in Belgium and finished third in the inaugural FIH Hockey Pro League season.

Now signed up to lead the German women's team up to and including Paris 2024, Reckinger is determined to build on the teamwork and compact playing style that have become the hallmark of the German team under his leadership.

Are you satisfied with the amount and quality of preparation time you have had with your team ahead of the first FIH Hockey Pro League fixture?
Xavier Reckinger: So the team preparation was pretty much non-existent. Everyone trained in their own province and prepared individually and over the past five, six months, everyone tried to do the best they could under the circumstances. They did what was allowed. Everyone trained the same way and I am pretty proud of the way they trained. We haven’t been together for over six months now so let’s just say the [team] preparation was non-existent and it will be interesting to see how quickly we get back to our level and get the connections again as a team.

How excited, motivated and ready do you feel the players are for a return to Pro League action?
Xavier Reckinger: Excitement and motivation will not be the issue. The [Bundesliga] league has started so the players are happy to play some hockey and have some competitiveness again. Whether we are ready is another aspect. The question is whether we are ‘hockey fit’ enough. Thankfully the league has already started so we will be prepared in the best possible way under these circumstances. It will be great to come together again, play some games, yes, I am really looking forward to that.

Are you able to draw any positives from the break from action of the past seven months?
Xavier Reckinger: I think positives are quite hard to grasp at the moment. Looking back at the period, there have been a lot of economic issues, a lot of social issues, people have had different problems. Thankfully, we were not hit too hard by it. Everyone is healthy and fit. I guess everything slowed down a little bit. At the beginning, it was surprising how everything fell away but that gave time for us to focus on other things, maybe do some studies or some specialisations for work, so everyone had the opportunity to focus on other things. As a coach, it gave me the opportunity to analyse from a distance where we were. I think that is the only positives to take away from it.

What will you be looking for from your players if they are to win this opening game of the season?
Xavier Reckinger: For me, I will be looking to see how quickly we can get back to the level before the Corona break came. We were on a very positive way forward and things were moving well. Then the break came and I think we dealt quite well with it. But, having not been together for six months, it will be interesting to see how we get back to our old levels and get the connections again. I think that will be the main aspects. Hopefully that will get us a win but at this stage, not having been together, there are so many questions, it’s hard to say. We have got to have commitment, be fit, be smart, win penalty corners – all the cliched things that will get us a win. Everyone has had different preparations so it is difficult to say where everyone is at the moment in world hockey. Belgium is a team that is rebuilding, they missed out on Olympic qualifications, which means we don’t know much about them either.

Can you sum up the importance of the next few months when it comes to preparing for the EuroHockey Championships and the Olympic Games
Xavier Reckinger: We, at the moment, are not looking so long in advance. We are trying, when we come together, to become better. We have to see what the future brings and hopefully it will be very bright for us. I am confident that it can be and every day is important for that. Since you can’t plan too far ahead anyway, it makes you focus even more on the things that you do in the short term and that makes you stronger as well. Definitely the next few months are important heading towards the Olympics and European Championships but we are just looking forward to the next two or three weeks and then we reschedule that every week to make sure we have the best possible preparation.