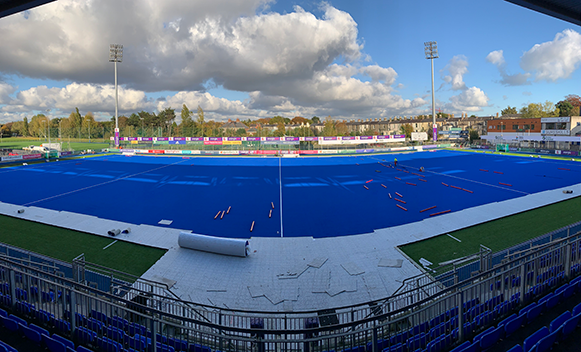 Four months ago, one of the most significant developments the sport of hockey has seen in decades took place in London at the Twickenham Stoop, home to English Rugby Union giants Harlequins. Whilst the FIH Pro League double header between the men’s and women’s teams of Great Britain and New Zealand provided wonderful entertainment for 12,000 fans in the stands and untold numbers watching via the global live broadcast, arguably the most fascinating story centred not around what was happening on the pitch. The pitch was the story.

As we reported in June, a ground-breaking partnership spearheaded by England Hockey saw the implementation of revolutionary portable pitch technology that could, in theory, allow hockey matches to be played in any major sporting stadium in the world. Excellent athlete feedback made The Stoop trial a resounding success, turning the game-changing dream of portable pitch technology – where a fully functioning, reusable international standard hockey pitch could be installed and removed with a turnaround as little as six days – into reality.

Following on from the positive test-run staged at The Stoop, the next chapter in the evolution of Temporary Overlay Pitch Systems (TOPS) will be written in Dublin, where Donnybrook’s 6,500 capacity Energia Stadium was unveiled last month as the stage for the women’s FIH Hockey Olympic qualifier between hosts Ireland and Canada. The move sees Hockey Ireland and Leinster Rugby collaborating in much the same way as England Hockey and Harlequins did in Twickenham, with the very same playing carpet that was used at The Stoop – Polytan’s Poligras Tokyo GT, the sustainable turf system that will be used at the Olympic Games Tokyo 2020 – being shipped to Ireland for the double headers that will take place on Saturday 2 and Sunday 3 November.

“This is a huge step for the sport in Ireland to play hockey in a venue of this size”, said Hockey Ireland’s Chief Executive Officer Jerome Pels. “An Olympic Qualifier on home soil is a unique event. We are delighted that Leinster Rugby share our excitement and ambition about the potential for bringing Big Stadium Hockey to Energia Park and exploiting the benefits of existing infrastructure to raise the profile of women’s sport. We are also grateful to the partners in Big Stadium Hockey, particularly England Hockey and Polytan, for all their support on the journey so far and we are delighted to be working with them on the delivery of this unique event.”

Polytan’s Paul Kamphuis, who is the lead on the Big Stadium Hockey project, described the Energia Park event as ‘historic’, while England Hockey Chairman Royston Hoggarth was also quick to congratulate Ireland on their “ambition and vision”, stating that “these critical games deserve big crowds and Big Stadium Hockey, with its temporary overlay pitch, will create a unique atmosphere.”

While the principles of the portable pitch technology that were used at The Stoop will remain in place for the matches in Dublin, there are subtle differences. For instance, there is no grass to worry about, with the temporary hockey pitch being constructed on top of Energia Park’s artificial ‘3G’ rugby surface, which will remain fully protected throughout the build and removal processes.

Another key change will be a significant reduction in the installation time, largely due to other events that will take place at Energia Park either side of the Olympic qualifiers. At The Stoop, each layer of the pitch was completed in full before starting the next. In Dublin, the pitch layers will be installed concurrently, with a meticulous sequencing and coordination plan being executed to complete the pitch build, from start to finish, in a matter of days.