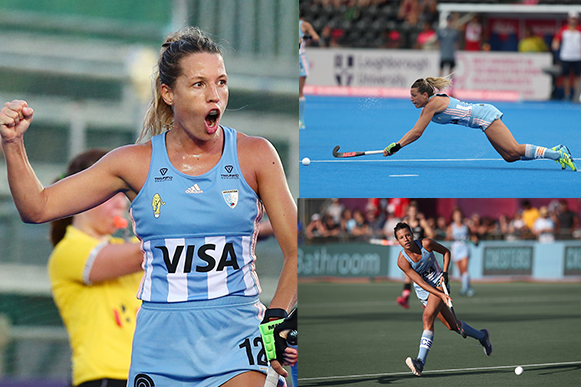 Passion and enjoyment are key for dazzling Delfina Merino

On the 15th October 2010, Argentina striker Delfina Merino celebrated her 21st birthday and had already achieved more than most manage to do in their entire careers.

In her breakthrough year of 2009, a teenaged ‘Delfi’ won silver at the Junior World Cup (Boston, USA) and won both the Pan American Cup (Hamilton, BER) and Champions Trophy (Sydney, AUS) in her debut year with Las Leonas. It was a strong start for the exceptional young attacker, who relished the opportunity to play alongside the great Luciana Aymar, a player Merino had watch on TV in the middle of the night throughout Argentina’s Olympic silver medal success at the Sydney 2000 Games.

Whilst 2009 was undisputedly a good year, 2010 proved to be even better. In July of that year, a second Champions Trophy title arrived in Nottingham, England, before a sensational dream was realised: becoming a world champion on home soil in Rosario in September of that year.

Now 30 and rapidly closing in on 300 international appearances, Delfina Merino has been widely considered as one of the world’s finest players for the best part of a decade. As well as becoming an Olympic silver medallist at London 2012 and winning numerous Pan American titles, she was also named FIH Hockey Stars Player of the Year for 2017, becoming the first Argentine player to win the prize since Luciana Aymar collected the last of her record eight titles in 2013.


Despite having enjoyed a number of seasons playing club hockey in the Netherlands with SCHC, Merino has spent the vast majority of her career with Banco Provincia in Buenos Aires, where her father, mother and brother all played. Merino’s focus for 2020 has been very much with the Argentine national team, where a strong showing in the FIH Hockey Pro League would have been perfect preparation toward the goal of winning a first ever Olympic gold medal for Argentina women at Tokyo 2020.

Sadly, the ongoing COVID-19 global health crisis has forced the postponement of the Games until 2021, with Merino switching her focus from Tokyo to encouraging everyone via her social media channels to stay home and stay safe whilst also offering some fantastic skills videos to keep everyone entertained.

Delfina Merino, one of the true superstars of Argentine hockey, speaks to FIH about her career to date, her personal highlights and much more.

Hi Delfi, thank you for talking to us. Since making your Argentina debut in 2009, you have experienced some incredible moments in your career. What are your reflections about your achievements?
Delfina Merino: “My reflections on my career is that I am very happy with what I have achieved, and the way it has been. I hope many nice moments are coming ahead. But the most amazing thing about my career is that I feel really lucky, happy and honoured to be playing for the national team. It had been a dream [of mine] since I was really young, so to have the opportunity to make this dream real, play for Las Leonas and represent my country – playing hockey, my great passion – it means a lot to me. I’m really grateful and feel really honoured. I hope I can keep enjoying doing what I love.”

Who or what first influenced you to pick up a stick and play hockey?
Delfina Merino: “I started to play hockey when I was five years old at Banco Provincia, which is my club in Buenos Aires, Argentina. I think one of the main reasons why me and my brother [Gonzalo, a Pan American Cup winner with Argentina men in 2017] play hockey is because our parents played hockey at Banco when they were young. Since we were born, hockey has been with us and we are, really, a hockey family.”

Who has been the biggest influence on your career and why?
Delfina Merino: “One of the biggest influences on my career and my hockey has been my family, but at the same time if I have to think about players, I really think about the Las Leonas team [that played] in Sydney 2000 [Olympic Games]. They had a really big tournament in Australia, and I was a really big fan of the team when I was around 11 or 12 years old. I woke up every night to see the game of Las Leonas. I was a big fan of Vanina Oneto, Magui Aicega, Luciana Aymar, Soledad Garcia, Karina Masotta – they were all amazing players. I remember watching them and wanting to be like them when I was older. That team really inspired my passion for hockey and Las Leonas.”

If there was one sentence to sum up your playing style or attitude on the pitch, what would it be?
Delfina Merino: “One of the attitudes I try to show on the field is to be passionate. I’m really passionate about playing hockey and I love to represent my country, so I try to give everything and put all of my passion onto the field. I also try to enjoy it. Personally, I really enjoy [being on] the field, it’s really easy to play and I have a great time. I try to combine both things, my passionate [attitude] and to enjoy what I am doing.”

What would be the best advice you could give to aspiring young hockey players?
Delfina Merino: “The advice I would give to a young hockey player is first, to do what you love. If it is hockey it’s hockey, but if it’s another sport it’s also okay! Try to do something you really enjoy, something you really feel happy doing. I think that when you do what you love it’s really easy to be good at it, and to put a lot of effort in it to try to improve. The most important thing is if you start playing hockey and you like it, just continue to do it. You will find friends; you will find different things that will be really helpful for your life.”