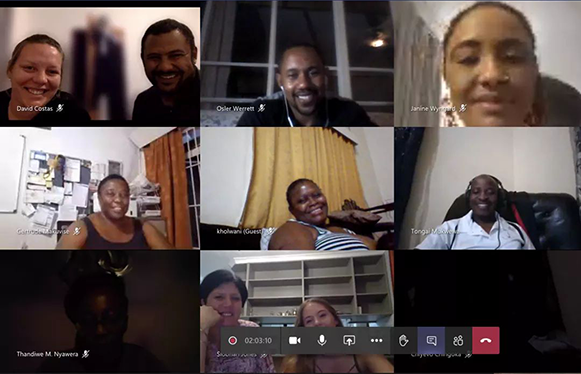 The month of November has been a busy one for the Zimbabwe Hockey Federation as they have held three online courses aimed at promoting the skill-set and knowledge base of umpires, technical officials and coaches.

What makes the three courses particularly special is that all the course educators are giving their time and expertise freely and the Zimbabwe Olympic Committee (ZOC) is covering the costs of the internet costs of all the candidates.

The solidarity and support shown by the international team of educators and the national Olympic Committee has been warmly welcomed by Sarah Bennett, who is Secretary General of the Zimbabwe Hockey Federation and chair of the Development Committee for the African Hockey Federation.

“These are exciting developments for our umpires, coaches and technical officials who have been selected to attend these courses,” says Bennett, who is herself a top level match official.

Through her FIH contacts, and with the support of the FIH and ZOC, Bennett was able to approach potential educators to see if they would be interested in helping with the initiative. As she explains, the national association would not have been in a position to run the courses had the educators not been willing to give their time and expertise freely.

The support offered by both the international hockey community and ZOC has also been praised by Tayyab Ikram, Chairman of the FIH Development and Education Committee: “Regarding the support of Zimbabwe NOC to the online courses, I believe it is a very good initiative. It is also a part of FIH ongoing online activities, which FIH has heavily involved itself with, during these pandemic times.

“We appreciate the support of the National Olympic Committee of Zimbabwe, who dedicated some of their resources to help these courses. I think Zimbabwe NOC’s special assistance will make them a really good partner with us to develop the coaches and officials in Zimbabwe. It is a very active approach and we appreciate this effort.”

Ikram also thanked Hero for its support for the initiative: “Hero has always been very proactive and leading to assist not only our show-case events but also the development of hockey throughout the world. Regarding this great initiative, we are pleased to offer the Zimbabwe Hockey Federation some of the opportunities offered by Hero.”

For Bennett, the courses are one step along the way to putting Zimbabwe back on the international stage: “As Zimbabwe hockey looks to grow the sport and get back on the world map, these courses will help by giving our coaches and officials the adequate tools and knowledge to be able to help with the development of hockey in Zimbabwe.

Once qualified, the candidates will assist in local leagues and generally help Zimbabwe hockey continue its gradual return to a status that once saw it winning a gold medal at the Olympic Games (Moscow 1980).

The continued use of online resources for education and development is something that Ikram says has given the hockey workforce the opportunity to share knowledge on a grand scale. The Zimbabwe initiative is one such example.

“This was a good opportunity for us to engage our global network of the educators and get their advanced input for all our audience in different categories. So, I think this approach by Zimbabwe NOC and Zimbabwe Hockey Federation is an excellent best practice example.

“I am sure that many other Federations will also follow these footsteps, they will also use similar resources to advance their sports structures. As a matter of fact, it is already happening, but I think especially coming from the Zimbabwe National Olympic Committee and Zimbabwe Hockey Federation, it was an excellent initiative. We are thankful to everyone involved in this whole package.”