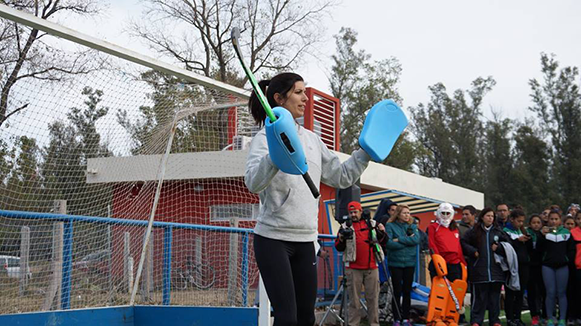 Laura del Colle has embraced the growth in online coaching as a means to improve accessibility to hockey coaching courses. Although it is a method of course delivery that has been thrust on her, it is a method that she has adopted wholeheartedly, both in her role as a Coach Educator with the FIH Academy and her own private coaching business.

Del Colle is a silver-medal winning Olympian. The 37-year-old was part of Las Leonas squad that won silver at the London 2012 Olympic Games. As a coach and physical education lecturer, she pours the same amount of passion, experience and knowledge into her coaching tuition as she put into her playing career.

But in the 14 years that Del Colle has been coaching, the past few months have led to a very different and sometimes challenging way of doing things. Back in April she produced an online course called Santander IE Best Practices in Digital Education, with the aim of helping people to transition to a digital educational environment. At the same time, she took her own goalkeeping academy Arqueros Okey online. Aspiring goalkeepers trained with Del Colle via a real-time online course.

It is the accessibility of the online coaching courses that has excited Del Colle. Suddenly it is possible to communicate with people across the globe without the time and expense of getting them all into one place. And, as Del Colle explains, that often leads to very different conversations.

“In my opinion, with an online course you can connect coaches, players and goalies from all over the world by video conference. By sharing knowledge and experience it is really useful for the hockey family. It is another tool to connect different countries, to teach and learn about goalkeeping all around the world.”

On the course – Introduction to Coaching Young Goalkeepers – Del Colle covered areas such as: the core skills of a young goalkeeper; the basic principles and fundamentals of goalkeeping; and how to create practice sessions to develop the core skills and techniques.

While Del Colle is emphatic that practical coaching is an absolute must in the development of players and coaches, she believes that the way forward is a blend of online and practical coaching. She says, the beauty of providing some of the education via an online tool is that it opens up the courses to a much wider cohort of participants, creating a new level of connection between different countries and cultures all around the world.