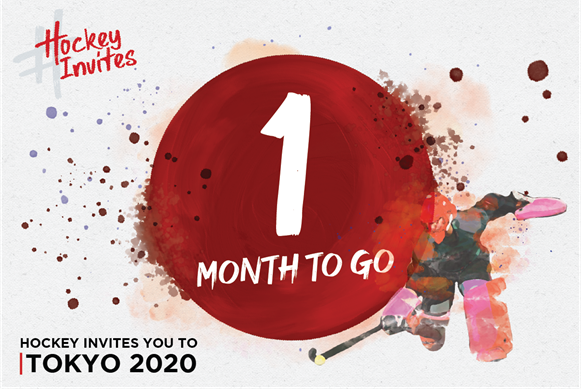 Olympic Day marks one month to go until Tokyo 2020

Today, Wednesday 23 June, is a day of double excitement for everyone in the Olympic family, being both the annual Olympic Day celebration and exactly one month until the start of the delayed but eagerly anticipated Olympic Games Tokyo 2020.

In just 30 days, as the Olympic flame lights up the cauldron in Tokyo’s Olympic Stadium, the Games of the XXXII Olympiad will officially begin. The hockey competition gets underway the following morning at the state-of-the-art Oi Hockey Stadium, with Japan’s men taking on current world number one Australia in the tournament opener at 0930 Japan Standard Time. It will be the first of six men’s matches that will take place on that day, with the Netherlands and India getting the women’s competition rolling in the evening. Make no mistake about it, hockey will be very much at the centre of the Olympic action, just as it has been for every Olympic Games since it became a permanent fixture at Antwerp 1928, some 93 years ago.

Olympic Day – which marks the formation of the International Olympic Committee (IOC) on this day in 1894 – aims to celebrate the joy of sport and remember the creation of the modern Olympic Movement by founder Pierre de Coubertin.

The first Olympic Day was celebrated on 23 June 1948 by nine National Olympic Committees hosting ceremonies in their respective countries: Austria, Belgium, Canada, Great Britain, Greece, Portugal, Switzerland, Uruguay and Venezuela. Since then, the annual event has grown exponentially.  Since 1987, Olympic Day runs have taken place all over the world. But it has become so much more than just a sporting event. It has become an annual world-wide celebration of the Olympic movement and its values, promoting a healthy and active lifestyle. Based on the three pillars of ‘Move’, ‘Learn’ and ‘Discover’, on this day National Olympic Committees all over the world organise sporting events as well as cultural and educational activities for all, regardless of age, gender, social background or sporting ability.

Due to the Covid-19 global health pandemic – which forced the postponement of the Olympic Games Tokyo 2020 by one year – the 2020 Olympic Day was certainly different to previous editions. However, it was no less inspirational, as Olympians from all over the globe used their energy and positivity in an attempt to create the world’s largest 24-hour digital first Olympic work-out. It was a powerful statement that built on the wonderful efforts made by countless athletes – including hockey stars like Great Britain’s Sam Ward and Lidewij Welten of the Netherlands – who produced home fitness routines and tips for staying healthy in body and mind during lockdown.

Wishing everyone a Happy Olympic Day, IOC President Thomas Bach described this year’s occasion as being even more special than usual.

“On this Olympic Day, when the entire world has been facing the same struggles and fears because of the global coronavirus pandemic for far too long, the power of sport to bring hope and optimism takes on an even greater significance”, said Mr Bach. “When the athletes from all across the globe and the IOC Refugee Olympic Team finally come together for the postponed Olympic Games Tokyo 2020 on 23 of July, they will send a powerful message from Tokyo to the world: the powerful message of peace, solidarity and resilience.”

With the gradual lifting of Covid-related restrictions, there has been more opportunity for national associations to get involved in Olympic Day celebrations this year. Among those celebrating are the Czech Republic, who is running a series of events for teenagers – 14 and 15 year olds – to take part in hockey and other sporting activities. One of the organising group, Carolina Paterson, said: “We are celebrating their determination and enthusiasm during online training and we are supporting their camaraderie, which continued throughout the Covid outbreak.”

Also celebrating Olympic Day is the Iran Hockey Federation. Dr Bahram Ghadimi, the President of the IHF reports that the national association is organising a series of matches across the country for men and women, with young aspiring umpires officiating the matches.

And in India, the celebrations will last for an entire week. Organiser Ahad Azim explains that the activities will include quizzes, art and craft activities and other competitions all based around the Olympics and hockey. There will also be a range of wellness activities that will take place online, reaching an even wider audience.

These are just a few examples of the creative ways in which the hockey community is coming together to celebrate the values and ideals of the Olympic Games.

“I am so glad that the Games of the XXXII Olympiad are finally here. The chance to celebrate the world’s finest athletes on the world’s greatest global sporting stage is a hugely positive thing for all of us. I want to extend my sincerest thanks to the organisers of Tokyo 2020 (TOCOG), the Japanese authorities and the IOC for their incredible efforts to make it possible. And I’d like to encourage all members of the global hockey community to join, celebrate and promote Olympic Day, while of course following all measures in place to protect everyone’s health”, said FIH President Dr Narinder Dhruv Batra.