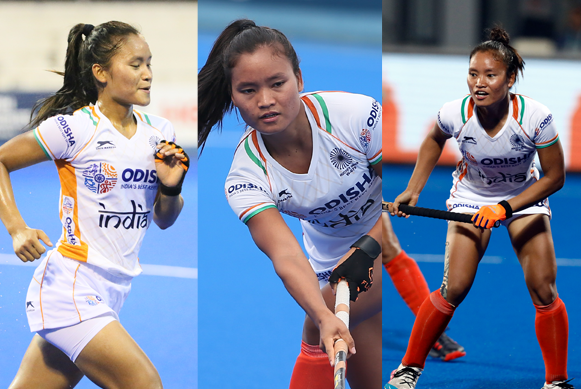 On Friday 3March 2017, an immensely gifted 16-year-old from the north-east Indian state of Mizoram was given her first taste of international hockey. India’s Eves were playing in the second of a five-match series against Belarus in Bhopal, and Head Coach Sjoerd Marijne was keen to see what she was capable of. It was an opportunity that she grabbed with both hands, scoring a final minute penalty corner to give India a 2-1 victory over the Belarusians.

The player in question, Lalremsiami, is now 20 years old. She has not just established herself in the Indian national team, she is also recognised as one of the most exciting young prospects in the game. Seven months after her debut, she was part of the India team that won the 2017 Asia Cup title in Kakamigahara (JPN) before a busy 2018 saw her play and compete in the Vitality Hockey Women’s World Cup 2018 (London, ENG), 2018 Asian Games (Jakarta, INA) and the 3rd Youth Olympic Games (Buenos Aires, ARG), winning silver medals in both Jakarta and Buenos Aires as well as being named Asian Rising Star.

2019 was another fine year on the field for the youngster, winning the FIH Women’s Series Finals in Hiroshima (JPN) as well securing a ticket to the now-delayed Olympic Games Tokyo 2020 thanks to a thrilling 6-5 aggregate victory over USA in Bhubaneswar. Her stellar performances saw her named the 2019 FIH Women’s Rising Star of the Year, another accolade in the life of a young player still very much in the early stages of her international playing career.

Off the field, however, 2019 was tinged with tragedy. Lalremsiami’s father passed away back home during the course of the competition in the FIH Women’s Series Finals event in Hiroshima. Despite her grief, the young athlete showed incredible mental resilience to continue playing. After the event, she said: “I wanted to make my father proud. I wanted to stay, play and make sure India qualified.”

Speaking to FIH from the Sports Authority of India (SAI) campus in Bengaluru – where the Indian men’s and women’s national core probable athletes are following individual training plans in their rooms, being monitored online by their coaching staff – Lalremsiami looks back at her career and encourages young players to stay happy and never stop believing in themselves.

Hi Lalremsiami, thanks for talking to us. It has been nearly three years since you made your debut for India, despite the fact that you have only just turned 20! How do you reflect on these incredible moments, and what is your biggest future ambition with the India team?
Lalremsiami: “I believe it‘s been a learning curve for me personally and for the team. In the past few years we have been playing together for a while now, and it shows in the way we play. I believe I have been very fortunate to play for India at such great tournaments early in my career. I think ultimate goal for any hockey player is to represent your country at the Olympics and try to do well for the country.”

Who or what first influenced you to pick up a stick and play hockey?
Lalremsiami: “During my school days we had hockey as a sport. That is how I started playing hockey.”

Who has been the biggest influence on your career and why?
Lalremsiami: “The biggest influencers and my biggest supporters have been my parents. They have always pushed me to do my best and keep going, no matter what. I cannot ever thank them enough for all they have done for me.”

How would you best describe your playing style or attitude on the pitch?
Lalremsiami: “I think of myself as a calm person. I try to keep cool in any situation, and always play [my] best. We always focus on our goal and try our best until the end, not giving up.”

What moment on the pitch are you most proud of and why?
Lalremsiami: There has been a few moments in my [short] career. I don’t think anything beats the feeling of the first moment you represent your country, wearing the Indian jersey. I have been fortunate to have been part of the team that played in the World Cup [London, 2018] and qualifying for the Olympics [last year] made all of us very proud.”

What would be the best advice you could give to aspiring young hockey players?
Lalremsiami: “Train hard, work hard, believe in yourself. Set yourself small and achievable goals, and work towards them. But, most importantly, be happy doing all of these things, and never give up on yourself.”

What have you been doing to stay active and healthy during the ongoing COVID-19 global health crisis?
Lalremsiami: “As you are much aware, the Indian women’s hockey team has been involved in a fundraising campaign to help feed 1000 families. We did small and exciting challenges using social media, and now we achieved our goal. As usual, I am doing workout to stay active, and keep myself fit and healthy.”