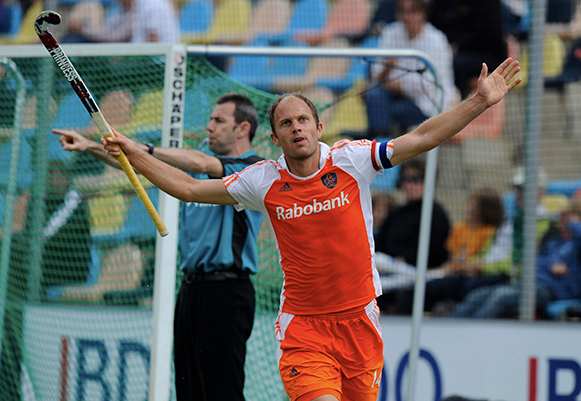 It has been six years since Teun de Nooijer, one of the most outrageously gifted hockey players the world has ever seen, brought the curtain down on his competitive career at the age of 38.

The extraordinary Dutchman enjoyed the sort of career most athletes can only dream of. His raw talent – a frightening combination of blistering pace, astonishing skills and a predatory instinct for scoring goals – was noticed early, being awarded the first of a world record 453 international caps aged 18, way back in 1994.

Such was his incredible longevity, De Nooijer – who was named FIH Player of the Year in 2003, 2005 and 2006 – made his last international appearance some 18 years later, competing in the final of the London 2012 Olympic Games where his Netherlands team fell to a narrow defeat at the hands of Germany.

Silver in London may not have been the fairy-tale ending that the ever-ambitious, ferociously competitive De Nooijer would have wished for, but it was a fourth medal in a staggering five Olympic Games, adding to the golds he won at Atlanta 1996 and Sydney 2000 as well as silver from Athens 2004.

They are far from being the only medals in De Nooijer’s collection. At 22 he became a world champion, scoring a ‘golden goal’ winner against Spain in the final at a sensational event on home soil in Utrecht. In 2007 he helped the Oranje win the European Championship and, between 1996 and 2006, played a starring role as the Dutch won six FIH Champions Trophy titles.

Even at club level, De Nooijer enjoyed extraordinary success. He won ten national titles, nine with his beloved HC Bloemendaal – including five in a row between 2006 and 2010 – and one with Harvestehude in Germany. He also won three European club titles, lifting the old European Cup in 2001 before twice winning the Euro Hockey League, the high profile competition that replaced the European Cup in 2007.

His first EHL title arrived in 2008-09, playing alongside Australia legend Jamie Dwyer in what was one of the most devastating attacking partnerships in the history of European club hockey. A second EHL victory arrived in 2012-13, with De Nooijer raising the Alain Danet trophy at the age of 37. It was his final top level season with Bloemendaal, although he did compete in the 2014 Hockey India League for Uttar Pradesh Wizards.

In part one of a two-part interview special, Netherlands superstar Teun de Nooijer – who alongside his job as a head-hunter for recruitment specialists McDermott + Bull is co-trainer for the Germany women’s team that is preparing for the upcoming FIH Hockey Pro League matches against Belgium later this month – reflects on some of the highlights of his wonderful career.

Hi Teun, thanks for talking to us! It’s been a few years since you retired from playing top level hockey – are you missing it?
Teun de Nooijer: “Of course, yes! It’s already been a long time – I spoke with somebody this week about it, it’s been six years. Since then I’ve played some matches, opening a club or a new clubhouse, or a farewell game or something like that, but it’s a really long time ago. I still follow the sport. My kids play hockey, and I watch a lot in the Netherlands at my club in Bloemendaal. But playing really competitive, that’s a long time ago. I really enjoyed it, and I played for a long time. It is hard to get something instead of that, that feeling. It’s just not the same, Of course, I enjoy playing hockey, but it’s just different [now].”

In a sensational international career, you played 453 international matches, which is a world record. That must be something you are pretty proud of.
Teun de Nooijer: “It is an amount! It went really fast. My career was 20 years [long], but it felt like one year. There was always a new situation; new coaches, new team-mates, the opponents are different. I think I was lucky with my body as well. Of course, I took care of it, but really big injuries weren’t there. I was lucky with that, so I have to thank my parents!”

You won everything as a player, both with the Netherlands and Bloemendaal, your club team. Over such a long and successful career, it must be difficult to pick a highlight?
Teun de Nooijer: “That is really hard. If I look back, five times in a row national champions with Bloemendaal, is for me a highlight. Not just the one, but the five in a row. I really look back on that period with a lot of joy. Of course, the first time at the Olympics [Atlanta 1996], where we improved every game. I played left striker and was allowed to go forward and bring what I could to the team. In your first Olympics, winning the gold medal, it was unbelievable. That is a highlight as well. I have to mention the World Cup in Utrecht in 1998, where in the end we had the gold medal as well, in a crazy final against a really good Spanish team. We also faced them two years earlier in Atlanta in the final. In the end, we were lucky and we won! We got a corner, and I put in the rebound. The whole event, in a big soccer stadium, sold out with I think 14 or 15 thousand people, it was just one big party, for two weeks! We were focused on the tournament and the games, but for world hockey and the hockey family in the Netherlands, it was just a great event.”

Many players describe you as the best player they either played with or against. Who would you describe as being the best you played with, or against, during your career?
Teun de Nooijer: “That is a really hard question. I played against the top of the top, of course. A lot of good players. If I need to pick somebody out, which always for me is hard because it just isn’t fair, but of course I played a pretty long time with Jamie Dwyer at Bloemendaal. It was a fantastic period, and also against him of course. He was an unbelievable player, so I will pick him out together with Shahbaz [Ahmed] from Pakistan. Of course, it was in the beginning of my career, but his [Shahbaz’s] playing style, with a lot of speed going forward. The energy he had and the skills he had; he was an unbelievable player. [It is] still [impressive], when you watch [clips] on You Tube. It is a pity there is not a lot of footage from back then, but also an unbelievable player.”

Part 2 of our interview with Teun de Nooijer will be published in the coming days.