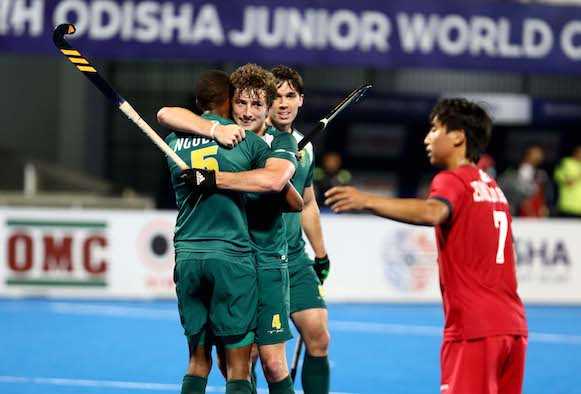 Day 10: South Africa produced a superb display to defeat Korea and secure their best ever finish at a men’s Junior World Cup as the 9th to 16th classification positions were decided in Bhubaneswar.

The 4-0 triumph earned South Africa a ninth-place finish at the FIH Odisha Hockey Men’s Junior World Cup Bhubaneswar 2021, surpassing their previous best of 10th which was achieved at the Lucknow 2016 edition of the competition.

More details of all today’s matches can be found below.

15th – 16th Place: USA 2-2 Egypt (3-0 After Shoot-Out)
USA ended a difficult tournament on a winning note, fighting back from 2-0 down to claim an excellent draw against Egypt before triumphing in the shoot-out to snatch 15th position in the final standings. The Egyptians opened the scoring inside the first 60 seconds of the match when Abdelrahman Elganayni netted a penalty corner, with the same player doubling the advantage with a 24th minute field goal. Egypt held their two-goal lead until seven minutes from the end of the contest, when Tymen Kloen pulled a goal back from a penalty corner. Incredibly, Kloen struck again with a last-gasp open play effort to force the shoot-out in which the Americans dominated, with Kloen, Finlay Quale and team captain Jatin Sharma all converting to earn a 3-0 win in the one-on-ones.

We’ve improved a lot in this tournament”, said USA’’s Tymen Kloen, whose contribution rightly earned him the Player of the Match award. “We’re a very young squad and we have a lot of potential. I think we showed that today and we came up with a win. 0-2 down at half-time and we still win. This is a good sign.”

13th – 14th Place: Canada 2-1 Chile
Canada snatched 13th place with a 2-1 win over Pan American rivals Chile in the second match of the day. Following two scoreless quarters, Canada took the lead with five minutes remaining in the third period when Christopher Tardif netted from open play, with Tanvir Kang scoring what proved to be the decisive goal midway through the fourth and final quarter. Chile’s Agustin Amoroso bagged a penalty corner with three minutes of the match left to play, setting up a tense finish to the contest. However, it was the Canadians who held on to secure 13th place, their highest finish since the 1985 Junior World Cup on home soil in Vancouver, where they also finished 13th.

“I feel like we got better every single game in this tournament, we just sticked to the game plan and we got the result today”, said Canada’s Player of the Match John Jacoby. “There are so many learnings that we will bring home like the speed of the game, playing these crazy teams, it’s a lot!”

Chile’s Nicolás Abujatum said: “They knew us, we knew them. These matches are decided by the team that makes less mistakes. We made mistakes that cost us to lose the game. Every player learnt a lot during this tournament. We have players with different ages, so each one has different things to learn. Some of us will not continue in the Juniors’ team, others will have more continental competitions, maybe World Cups, so I think we are learning how international matches are played.”

11th – 12th Place: Pakistan 5-0 Poland
Pakistan proved too strong for Poland in the 11th – 12th classification match, running out comfortable winners against the Europeans in the third match of the day. The Junior Green Shirts exploded out of the blocks, taking a 2-0 lead in the opening six minutes thanks to two penalty corner conversions from Ali Rizwan. The team from Asia extended their lead to 4-0 ahead of half time, with Moin Shakeel firing home from open play before captain Abdul Rana netted from a penalty corner routine. Poland battled hard and made life difficult for their opponents after the break, with Pakistan only adding one more to their tally thanks to Muhammad Hammadudin’s field goal.

“We were better structured today”, said Player of the Match Ali Ghazanfar of Pakistan. “We’ve learnt from our mistakes in the previous matches and today we have converted our goal opportunities. We didn’t play well against Germany, which was our first match in the tournament, but for the other matches we played very well. We improved match by match.

Poland’s Jakub Mikolajczak said: “It wasn’t our day today. I think that Pakistan were just better. We have to work a lot until the next tournament. Participating in this World Cup was the best thing in my life! I’m one of the youngest players. See you soon!”

9th – 10th Place: South Africa 4-0 Korea
South Africa’s best Junior World Cup finish came courtesy of a dominant display against Korea, with captain Guy Morgan producing a Player of the Match performance to help his team along the way. Morgan scored two sensational penalty corner drag-flicks, firing high into the net in the both the third and fourth quarters, giving his team a deserved lead following a score-less opening two periods. South Africa hit a third less than 60 seconds after their second, with Trevor de Lora firing home on the backhand before the result was put beyond all doubt seven minutes from the end when Zenani Kraai finished off a superb passing move to complete the match scoring.

“I think we had a bit of a slow start this evening, which was a bit frustrating from our side”, said South Africa’s Morgan after the match. "At half time, we worked it out in our heads, got back out there and made things happen, which was awesome. I’d like to say a massive thank you to the organisers, officials and everyone. It has been an amazing experience for everyone.”

Korea captain Bae Soung Min said: “South Africa played very well, making the chances to get the goals. The tournament has been a good experience.”

The Junior World Cup action concludes on Sunday (5 December) with the four remaining matches being played to settle the final standings and, crucially, determine the next Junior World Cup champions. The day’s action begins with Spain playing Malaysia in the 7th – 8th classification match at 10:30 Indian Standard Time (UTC +5.30), before a Low Countries derby match between Belgium and the Netherlands, who meet at 13:30 in the 5th – 6th play-off game. India and France play for bronze at 16:30, with the title match between Germany and Argentina taking place at 19:30.

The Watch.Hockey app is live streaming matches free of charge to all territories outside of India, Maldives, Nepal, Bangladesh and Sri Lanka, locations which are subject to existing broadcast rights agreements.

Official Communication: Following an incident leading to a breach of the FIH Code of Conduct that occurred immediately after yesterday’s semi-final between Argentina and France, French player Raife GONESSA (#14) has been suspended by FIH Technical Delegate Adam Webster (AUS) for the 3rd/4th place match (India v France) scheduled on 5 December 2021.