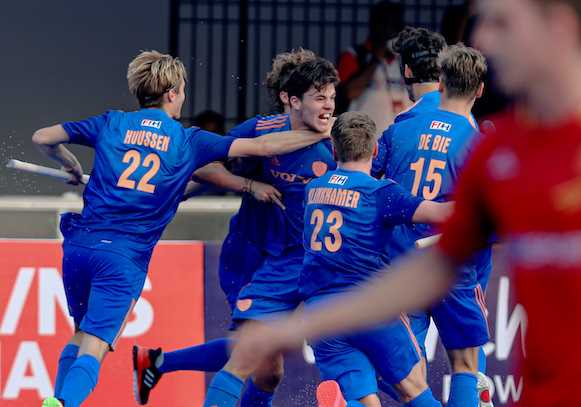 Day 3: The Netherlands and Germany both claimed their second victories of the competition to join France in the quarter-finals of the FIH Odisha Hockey Me’s Junior World Cup Bhubaneswar 2021. South Africa and Korea were also winners, while Malaysia produced a magnificent defensive display to hold Belgium to a 1-1 draw, a result that keeps both sides in contention for the knock-out phase.

South Africa 5-1 Chile (Pool A)
South Africa maintained hopes of reaching the competition quarter-finals, bouncing back from Wednesday’s defeat against Belgium to claim a comprehensive 5-1 triumph over Chile. South Africa face Malaysia on Saturday knowing that a victory could be enough for a place in the last eight.

Idrees Abdulla’s early goal gave South Africa a 1-0 lead that they did not extend until six minutes into the third quarter, when Peter Jarvis doubled the advantage. Chile hit back almost immediately thanks to Aguastin Amoroso’s penalty corner, but strikes from Cameron le Forestier (2) and Jacques van Tonder put the result beyond all doubt.

“It feels good to win, especially after our loss against Belgium”, said Player of the Match Cameron le Forestier. “We decided to play our own brand of hockey, so I think that really worked down well for us, especially in the third and the fourth quarters. The two goals I scored are prime examples of what we practice at training.”

Chile’s Nicolás Abujatum said: “It was a really hard game. We made some mistakes that cost us each of the goals and that ended up as the score shows. Each game teaches us the mistakes that we have to correct. Now we will start preparing our next match against Belgium and play the best we can.”

Korea 5-1 USA (Pool C)
Like South Africa, Korea were also beaten on their opening match – losing 12-5 in a bewildering clash with the Netherlands – but showed real character to claim a 5-1 victory over USA, maintaining their hopes of a quarter-final berth.

First half goals from Lee Seungwoo, Jeong Jun Seong and Hwang Gyudong put the Koreans in control, with Kim Taeho’s second quarter double being split by a field goal from USA’s Wyatt Katz. Korea need to defeat Spain in their final pool match in order to guarantee a place in the competition knock-out phase.

Yesterday we had a tough match against the Netherlands, where we conceded too many penalty corners”, said Korea’s Kim Taeho, who was named Player of the Match. “Today we’re happy that we could win the three points. Against Spain, we must win to hope to reach the quarter finals."

USA’s Jatin Sharma said:“Yesterday we had a team talk. We all have to go out there. Don’t care about what environment we’re in. Forget the nerves. Play with confidence and show some pride. I think today we had a lot of mental lapses, with silly mistakes but if we fix that, we can have a much better game next time.”

Spain 2-3 Netherlands (Pool C)
A dramatic late penalty corner from Miles Bukkens gave the Netherlands a second successive victory, beating Spain 3-2 to guarantee their safe passage through to the competition quarter finals. A thrilling contest saw the Dutch open a 2-0 lead thanks to first half goals Sheldon Schouten and Guus Jansen, with Spain dragging themselves level in the third quarter through Borja Lacalle and Pau Cunill. Bukkens netted the winner with just one minute of the match remaining, giving the Netherlands six points from their opening two matches in Bhubaneswar.

“First of all, very proud of the team, from the reserve players to the staff”, said Player of the Match Luke Dommershuijzen of the Netherlands. “So, well done everyone! We were leading 2-0 and then Spain came back but we believed in ourselves, showed a lot of character and scored the winning goal. You can only enjoy this!”

Spain’s Alvaro Portugal said: “We’re a bit disappointed because we were 0-2 down and then we came back but we conceded a silly corner at the end of the match and lost the game. We now have to focus all our efforts in the match against Korea and we have to win! We have to go to the quarter finals.”

Argentina 2-3 Germany (Pool D)
Germany survived a frenetic final few minutes to claim a 3-2 win over Argentina, moving themselves onto six points and guarantee a place in the competition quarter-finals. Mateo Poljaric and team captain Benedikt Schwarzhaupt gave Germany, the six-time Junior World Cup champions, a two-goal lead before Bruno Stellato’s penalty corner halved the deficit midway through the third quarter. Hannes Müller restored the two-goal cushion on the stroke of quarter time, but Franco Agostini breathed new life into Argentina’s chances. However, it was not to be, leaving Argentina needing to defeat Pakistan in their final pool match to confirm their place in the last eight.

“The last five minutes were pretty intense”, said Germany captain Benedikt Schwarzhaupt, who was named Player of the Match. “Argentina was a very tough opponent, very passionate. We’re very glad that we won today and ensured that we’ve got one foot into the quarter-finals. Now we need to recover and look at what went well today and what didn’t. Then we have our match against Egypt with the objective to finish on the first spot of our pool.”

Argentina’s Facundo Zarate said: “We already knew that it would be a tough game, a very physical game. Now, we need to focus on the next match. Against Pakistan, like for the other teams, we expect a tough, physical and very skilful match. We’ll be ready to fight.”

Malaysia 1-1 Belgium (Pool A)
An extraordinary defensive effort helped Malaysia claim a draw against Belgium, with goalkeeper Shamir Shamsul producing a Player of the Match performance to earn his team what could be a precious point in their quest for a quarter-final berth. The result sees both teams move onto four points, one point ahead of South Africa going into the final round of pool matches. Belgium were dominant but fell behind on the stroke of half time when Amirul Azahar fired home a penalty corner rebound. The Europeans had to wait until the fourth quarter before finally restoring parity, with Thibeau Stockbroekx slamming home a brilliant penalty corner effort – the only time they managed to beat the superb Shamsul – to ensure the points were shared.

“Thank you for the award”, said goalkeeper Shamsul on receiving his Player of the Match prize. “We played well as a team to get the result. We will work hard in the next game [against South Africa].”

Belgium captain Dylan Englebert said: “We wanted to win this game. It was not an easy game, they defended really well. Their keeper had a good game and they defended hard. We maybe lacked a bit of luck at the end. We were happy to come back at 1-1, but we wanted to score that last goal but it didn’t come today. Now we have a small amount of time to prepare for our next game [against Chile], so our focus is on that now.”

The Junior World Cup action continues Saturday (27 November) with a further five matches being played. Pakistan take on Egypt in Pool D in the first match of the day at 09:30 Indian Standard Time (UTC +05.30) before the France face Canada in Pool D at 12:00. South Africa’s Pool A clash against Malaysia begins at 14:30, being followed by Belgium versus Chile, also in Pool A, at 17:00. The final match of the day sees reigning champions India face Poland in Pool B at 19:30.