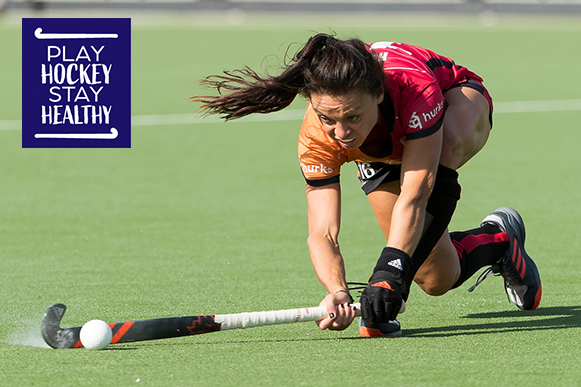 The return to hockey activity is being carefully trialled and monitored across the globe as the tight grip of Covid-19 on sporting activities is gradually relaxing. To find out how national association are returning to hockey-playing activities, FIH spoke to members of the international hockey community. In this interview we speak to the Poland national women’s team captain Marlena Rybacha and Mateusz Grochal, former coach to the U16 national boys team and now Poland Hockey Federation Development Manager.

Speaking as she was waiting to get on the pitch for a training session with her club team, the Dutch side HC Oranje Rood, Marlena Rybacha said: “It’s really nice to be back in training. I really enjoy every second we are back on the field, especially to be back with the girls and to hit some balls.

“There are a lot of restrictions during training, like we are not allowed to get closer than one and half metres so we are doing a lot of technical skills and a lot of passing and goal scoring. That is amazing,” she adds with a smile, “because normally I have to do a lot of defending. I am really enjoying being back on the field.”

Marlena became renowned during the lockdown for her inspirational home workout videos. Looking back she says: “I learnt that 50 days of workouts in a row without a rest is not the smartest move in the world. It is really important to take rest and recovery is a big part of the process. That means we can then perform 100 per cent, so ‘more is better’ is not necessarily true. That is something I will keep in mind during the coming months. I will not train too much without a rest.”

The training sessions themselves are carefully monitored. As Development Manager, Mateusz is heavily involved in the processes of returning to the pitch in a safe manner. He says: “We restarted our training sessions three weeks ago, all in accordance with our Ministry regulations. Firstly, in reduced groups of six players, plus one coach on a whole pitch.

“Now we are allowed 22 players, plus four coaches on a whole pitch. The next steps will be announced soon. We are expecting decision regarding competitions around 9 June.”

Marlena’s experiences with HC Oranje-Rood follow similar lines: “There are a lot of restrictions. We are not allowed to play games, we are not allowed to touch the equipment, so any cones or balls have to be moved by the coaching staff. Every training session finishes at least 15 minutes before another group takes to the pitch so we don’t meet each other.

“Fans are now around the club so there is a different entrance for exiting the field. There are a lot of rules, but really it is important to make sure we are safe and stay healthy.”

Just as Marlena has been interacting with her large social media fan base, so the Poland Hockey Federation has been maintaining contact with the hockey community. “From March through to May, we had an online skills challenge with videos featuring different national team players nominating others,” says Mateusz. “It was like a chain reaction, where many people got involved. One of our female national team players came up with a different challenge that basically involved doing five burpees, then nominating five more people who each donated five zloty to the fight against COVID19.

“We also created a poll to discover our best national team players of the past 20 years. A group of experts voted on their choices and this gave us the final eleven.” (Marlena Rybacha was among the selected star 11).

With people returning to the pitch, some clubs in Poland have made face masks and buffs featuring their club logo for players to wear. And at Mateusz’s own club, he says, every junior player is given a personalised water bottle to help emphasise the message about keeping safe.

Like the entire hockey community, Mateusz is delighted that things are slowly returning to normal. He says that social integration is a core value among club players in Poland and everyone, from coaches to players to parents, have all been missing the interaction. And while he says the technical skills are a bit “off” after such a long break, he adds, “the excitement and energy that we have noticed during the first training sessions have made those sessions really special.”