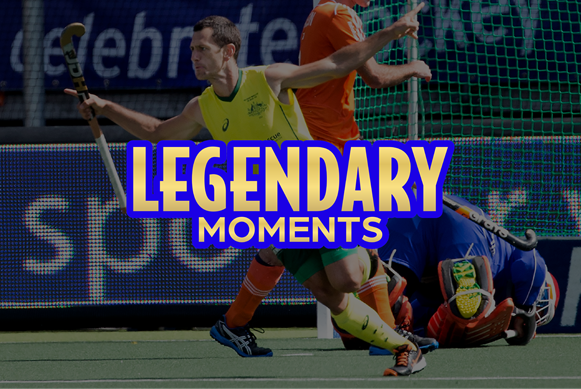 In Part 2 of our conversation with five times FIH Player of the Year Jamie Dwyer, the attacking legend continues his reflections on the 2014 Hockey World Cup final, where the Kookaburras claimed a stunning victory over host nation the Netherlands to defend the world title that they had won in New Delhi four years earlier.

Dwyer – unquestionably one of hockey’s all-time greats – discusses the half time advice of revered head coach Ric Charlesworth, where he rates the Kookaburras’ displays in The Hague as well as his emotions of scoring a brilliant individual goal to add gloss on a final performance that came close to perfection.

The full match replay of that epic final, as well as Part 1 of our conversation with Jamie Dwyer, is now available for all fans via the Watch.Hockey App.

FIH: When Dutchman Jeroen Hertzberger scored the opening goal, which he took very well, the stadium erupted, with the fans starting to believe that the Netherlands could beat you guys, despite your run of form. But your response was terrific, getting the goals before the break to take a lead into the second half. What did Ric Charlesworth, your head coach, say at half time? Was there any kind of guidance that allowed you to kick on in that second half or was it just to keep doing what you are doing?
Jamie Dwyer: “Just keep going. The one thing that Ric taught us was to go out there and be like robots. It doesn’t matter if it is training, whether we are playing against Fiji or the best country in the world, we go out there and perform like we should in every single minute and every single second. The messages were always the same from Ric at half time. He’s very good at reading the game, so he gives us a bit of a brief about what we should and shouldn’t do, and if we need to adapt in any way. But overall, it was pretty simple stuff – just go out there and keep grinding away. We knew we were playing better than the Dutch. You could see it in our team-mates’ eyes. We weren’t leaving it up to one person or two people. Everyone was in good form at that time, so knew collectively that we would run over them.”

FIH: You ended up taking a 6-1 win in that final. A lot of people consider it to be one of the most impressive ‘away’ performances in the history of the sport. I was wondering where it rates in terms of the best team performances from the Kookaburras that you have been involved in. How good was it? Is it in the top three?
Jamie Dwyer: “Oh yeah, definitely. The whole tournament for us as the Kookaburras was the best tournament I think I’ve ever been a part of, the best I’ve ever seen and I’ve been following the Kookaburras for a long time. Definitely the best tournament, and the final itself was very memorable because of the whole situation. Everyone in the Australian men’s hockey team knows the Dutch, because they won the 1996 Olympics, the 2000 Olympics, the 1998 World Cup, which was in Holland in extra time against Spain. We knew the Dutch team, we knew how good they were going to be. But to play that final, in that stadium, in front of the Dutch fans and to play the way that we did [was incredible]. It was definitely the best tournament that the Kookaburras have played.”

FIH: And you got on the score-sheet, scoring the sixth goal. Any recollections about that moment?
Jamie Dwyer: “Yes, I remember it like it was yesterday, really! It was a huge relief for me, just to score in that game. That whole year leading into that World Cup, it was up and down, you know? There were times there when I didn’t even know if I was going to play hockey for Australia after December 2013. I was thinking about retiring, I wasn’t having a great time and wasn’t enjoying it the way I did when I was younger. So, for me personally, it was a really emotional roller-coaster leading up into those games. To score, you know the emotions just came out and I celebrated probably a little bit too much. But for me, it was good to score. Thankfully it was probably one of my better games in the World Cup. Out of the seven games, it was probably my best or second-best game of the tournament, which I was happy about. But to score and finish it off like that, I was just happy. Really happy.”