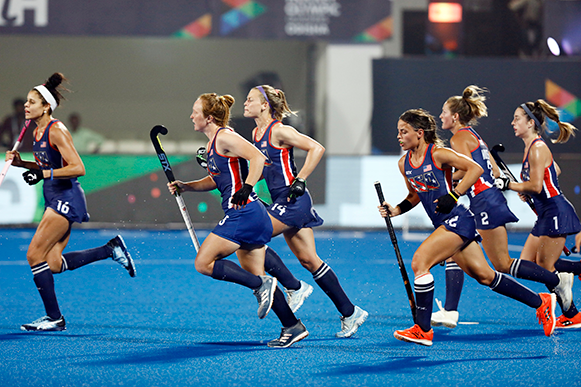 For the USA national women’s team, the 2 November 2019 was one of the most painful of experiences. Having gone 5-1 down to India in the opening encounter of the two-match Olympic Qualifiers the day before, they seemed to be down and out. A tremendous recovery saw the USA team claw back to 4-0, before India’s captain Rani, scored the decisive goal that gave the Asia team the margin they needed to secure a berth at the Tokyo 2020 Olympic Games.

Since then, the team has changed its coaching staff, with Anthony Farry, formerly Head Coach to Japan, taking on the challenge of returning the USA to top flight hockey. But, just a few fixtures into the FIH Pro League season two, the Covid-19 pandemic struck and any hopes of a USA revival had to be put on hold.

Now the USA athletes are preparing for a return to FIH Pro League action and, further down the line, seeking a winning performance at the Pan American Cup, their first opportunity to secure a place at the Women’s World Cup.

On the FIH podcast, the Hockey Pod, FIH spoke to two of the team, midfielder Lauren Moyer and goalkeeper Kelsey Bing. The players spoke about coping during lockdown, looking forward to meeting their Head Coach in person and the pain of that defeat in India.

For goalkeeper Kelsey Bing, her days are spent studying and doing home fitness. It might seem like ground hog day but the ‘keeper is determined to keep herself at peak fitness in readiness for an eventual return to action: “I think we are doing the best we can given our current situation. A lot of my team mates have gone abroad to get experience there, but for me, I am focusing on my strength and fitness and getting hockey experience where I can. So, I’ve been playing a lot with my high school team when we can. But we are all looking forward to getting back to action, particularly in readiness for the the Pan Am Cup.”

Not only has the team, like most other national teams, been in lockdown, but Head Coach Anthony Farry has been stuck in Australia since the pandemic struck and has only been able to communicate with his team via online methods so far but, says midfielder Lauren Moyer, he has done a great job of keeping an open line with the team.

“We have had team meetings and individual meetings and he has made himself super-accessible, so you would never know that he was halfway across the world. We are all thrilled by his level of professionalism and proactiveness. It has been really easy to buy into his plans and create a level of trust, despite not even meeting him in person yet. He is pushing messages and outlining plans that really resonate with where I think we need to go.”

If Lauren needs any motivation or inspiration to keep training hard, she only has to cast her mind back to those Olympic Qualifiers.

“My most memorable moment in my career so far was definitely not a positive one at all but was so impactful,” she says with heartbreaking honesty. “In that second game versus India, despite the outcome, it was such an incredible moment and feeling. Chasing that goal deficit as a team and in the moments right after the game was over, I felt I would never want to revisit that game again but there were some real invaluable learning points amongst all that pain.

“For me, in that reflection, it can shape where we want to go as a team. Acknowledging that moment and that pain will set us up for future successes.”

Listen to the whole interview with Lauren and Kelsey on episode 4 of Hockey Pod, via the Watch.Hockey app.