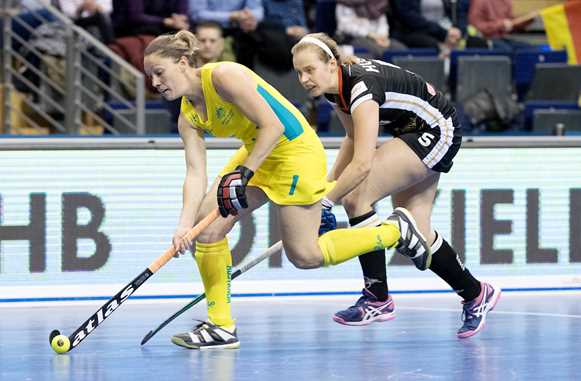 When Australia women’s national indoor squad next line up for an international competition one familiar name will be missing from the team sheet.

Lauren Austin has represented the national indoor squad at two World Cups – Berlin 2018 and Vienna 2007 – after she made her debut in 2006. She scored five goals across her two World Cup appearances and has also been voted Player of the Match on numerous occasions.

Austin is now retiring from the international scene to concentrate on building her business, although she also attributes the difficulties of continuing to train through Covid-19 restrictions as an influential factor in her decision to leave the game. It has not been an easy decision for the long-serving athlete but, she added that she also felt the need to spend more time with her family – currently work and training means she is travelling from one side of Australia to the other and that has a detrimental impact on family life.

In a statement announcing her retirement, Austin said: “As a self-funded athlete, which is what every member of the Australian Indoor Hockey squad is, the choice to fund a World Cup against getting back to see and support loved ones has caused me to consider my future playing at international level and come to this decision.”

The popular athlete says she will remaining the game in various capacities, particularly in the coaching field. In an interview with the national governing body Hockey Australia, she said: “I will continue to develop my coaching skills and learn more in that area, as well as doing what I can to grow the game in WA and Australia, to help develop generations of players to come through and hopefully one day maybe be back at a World Cup in a coaching capacity.”

National Indoor Team Head Coach Mark Sandhu paid tribute to Austin, who is known as ‘Ozzie’ within the squad, saying: “It has been my pleasure to have been Lauren’s coach at the 2007 World Cup and in numerous squads over the years. She has been a valuable member of the Australian squad for a long time.

“She is a super competitor, aggressive, a highly skilful player and she reads the game really well...she will be missed.

“It is always disappointing to lose a player of her calibre, however we support her decision and wish her all the best in her future endeavours.”

Austin says her career highlights include scoring a penalty stroke in the last minute of the game against host nation Germany in the 2018 World Cup in Berlin and also: “Playing with an array of not only amazing players, but people who I can say are now great friends that I have made for life.”