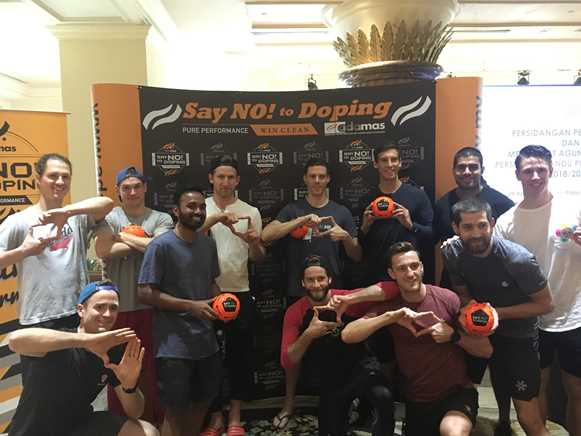 One, often overlooked, aspect of a hockey player’s life is being aware of anti-doping protocol. Hockey is lucky in that it is recognised as one of the sports with very few doping issues but, with more prize money available at more events, there is always going to be a risk that someone might be tempted to take performance enhancing or pain-masking medication that strays outsides the limits of what is acceptable.

It is a situation about which Canada’s Scott Tupper is unequivocal: “We all have friends who take stuff but, as an athlete, we can’t do that. It may look like great fun at the time but is it better than being an elite athlete? I think anyone who has to think about that perhaps isn’t going to make it as an elite athlete anyway.”

In a bid to stay ahead of any potential problems, the FIH is pushing ahead with updated procedures and a new education programme aimed at players, team staff and spectators.

Education booths were launched at the first of six FIH Series Finals, in Kuala Lumpur, which is where we caught up with veteran striker Tupper and one of Canada’s rising stars, Jamie Wallace.

“As an athlete, we would prefer to play in a sport that is clean and runs on a level playing field," says Tupper, who is also on the FIH Athlete Committee. "For FIH to take the initiative and ensure that hockey remains clean is a really good move.

“As an elite athlete you are very conscious about what you are doing. As a young athlete, your friends are probably taking some substances but you know the consequences if you do that and get caught. It is just important to steer clear of the things that might get you into trouble. I think if you have made the decision to pursue a career as a top athlete, it is not a difficult decision.”

Most of the players and coaching staff from the eight participating teams at the FIH Series Finals visited the education booths at the event, where they were invited to take part in a doping-related quiz that highlighted some of the areas that might trip an athlete up. Both the athletes and members of the public were also able to ask questions about the process of anti-doping.

Bryan Mo, who is the FIH Sport Services Coordinator and responsible for the FIH anti-doping programme, was on hand to offer advice to the athletes. He was delighted with the amount of interest the education booth received.

"These guys are complete professionals and want to know that they are doing the right thing," he said. "The general consensus from talking to the athletes and coaches is that they are proud that hockey is high among the 'clean sports' and they want it to stay that way. The quiz was a bit of fun but it also highlighted some very serious issues, including how important it is to keep checking that any supplement or medication you are considering taking are accepted under anti-doping rules."

Despite only being 19, Wallace is no slouch when it comes to anti-doping protocol. It is something the Canadian national team takes very seriously. “Through the junior program, we did a lot of training through the  Canadian Centre for Ethics in Sport, CCES (Canadian NADO) so we have been educated on what we can use in terms of supplements," says Wallace.

"As a young guy, there are a lot of influences around, so it is important to understand that the risks are just not worth it. It is important to stay professional at all times. Through the national team we do a course on anti-doping each year and I do another course through my university so I consider myself very well informed in this area.”

If Wallace enjoys a long international career then it is an area in which he will become even more expert. National athletes in Canada receive financial support each year, but to receive the support, they have to complete two online courses annually. As Tupper points out a little ruefully, after 14 years on the national program, he is well-versed in anti-doping procedure.