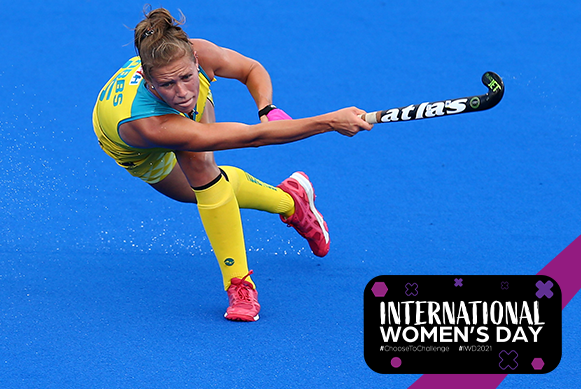 Kaitlin follows in a family tradition

As we continue our celebration of International Women’s Day with representatives from all our continental federations, we catch up with a player who is part of one of Australia’s most notable hockey families.

Kaitlin Nobbs’ love of hockey began at an early age when she used to watch her mum, Lee Capes and her aunt, Michelle Hager, plus her father and uncle all play at the local club. She was roped into being a ball girl for the club games but soon graduated onto the pitch, first for club, then state and eventually, in 2016, making her debut for the national senior team, in a test match against Japan.

“Watching my mum and auntie play for Australia was really, really inspiring for me. It is really nice to be able to go to them and draw on their experiences of being in the Hockeyroos team,” says Nobbs, whose father Michael Nobbs represented Australia and coached India at the 2012 London Olympic Games. In addition, her uncle Mark Hager is now Head Coach to Great Britain women. It can truly be said that Nobbs has some giant footsteps to follow.

“It was tough following in their footsteps because they did reach such a high level but my mum always instilled in me the idea ‘play because you love it’, and that is the best advice I received. I never felt pressurised because I have always loved the game and I am proud to now be able to say I have followed in her footsteps.”

The defender, who originates from New South Wales, has 82 senior caps for the Hockeyroos, as well as a further nine caps for the junior national team.

While Nobbs may have followed Lee Capes into the senior team, there is still one part of her mother’s journey that the 24-year-old would like to emulate: In 1988, Capes was part of the Australia team that won gold at the Seoul Olympic Games.