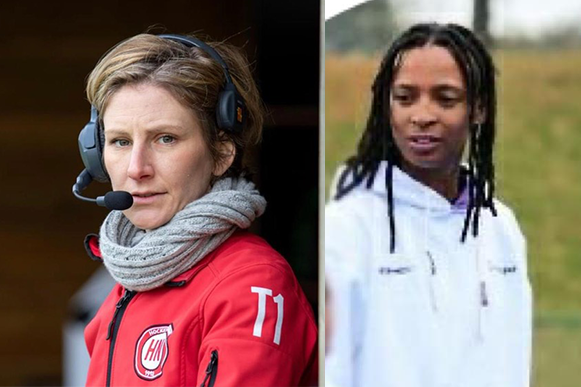 Joy and Pholo: moving on up

There has been much discussion in recent years regarding the dearth of female coaches in the higher reaches of hockey coaching. There is really very little argument or debate to be had – currently there is just one head coach working with a top 10 women’s national team. The fact that the coach in question – Alyson Annan – is exceptional and has a win ratio to prove it, does beg the question why she is the sole representative of women working in a head coach capacity at the top tier of the game in a sport where participation is balanced among the genders?

But there are also signs that things are changing. Double Olympian Caroline Nelson-Nichols is the current head coach of the USA women’s team; former South African striker Jen Wilson is head coach to Scotland; Russia women are led by Svetlana Ivanova; and Ukraine’s head coach is Svitlana Makaieva.

There are also many female coaches working with age group national teams – former Great Britain and England forward Hannah McLeod is one such example.

One of the reasons for the increasing number of women gradually finding their way into high performance coaching is the way coach education is being delivered. Increased use of technology, so that much of the learning can be carried out on-line is much more compatible with coaches lifestyles. Being able to video a coaching session and then share it remotely with a mentor means a coach can run a session in her own club or at a local pitch. Sharing best practice and holding coach to coach discussion via webinars is something that is becoming hugely popular within the coaching fraternity. These are all vitally important measures in making coach education more accessible to a wider community.

Two female coaches who are making their way up the coaching ladder are Belgium’s Joy Jouret and Tsoanelo Pholo from South Africa. FIH caught up with the two women to discuss their thoughts about women in coaching and the coaching profession more generally.

Former Red Panthers captain Joy Jouret is head coach to the Belgium national U15 boys’ team, as well as head coach to Namur Hockey Club and Coach Academy manager for the French side of the Belgian Hockey Federation. She is currently an FIH level 3 coach and last year spoke at a FIH workshop.

Tsoanelo Pholo is head coach at the University of Johannesburg and also head coach for the South Gauteng U18 women’s team. As Head Coach to the South African U18 squad, she led the team to the Youth Olympic semi-finals. Her first foray into senior international coaching took place recently when she worked with the South African men’s team as a forwards’ coach during their test series against Germany (before the Covid-19 lockdown).

The first question the two coaches discussed was the questions of barriers that prevented women from moving up the caching ladder.

“There are definitely cultural barriers that prevent women from becoming professional coaches,” says Jouret. “I don’t think there are formal barriers, I personally haven’t been confronted to any kind of discrimination. But in my opinion, Informal barriers do exist and they are linked to our cultural heritage.

“The first one concerns the traditional role of a woman in a family. This is hard to reconcile with the schedule of a trainer/coach. Then there is the fact that women are still really rare in coaching, even more in the male leagues, and must always prove that they are as good as men in a domain which still traditionally links coaching to manhood and masculinity.”

For Pholo much centres around opportunities: “I feel women coaches are not given the opportunities at junior level – schools, clubs and academies – so they don’t have the relevant experience to get involved at senior and national level. Coach education is another contributing factor. And not enough women apply to up skill themselves. How we remedy this, I do not know, I wish I had the answer.”

Both Jouret and Pholo have something in common. They have both taken their personal progression into their own hands and made happen. For Jouret it is simple: “It is up to me to show that I have what it takes.”

And for Pholo, when the doors she expected to open remained closed, she decided to broaden her skill-set even more. “After my success with the South African Hockey5s team, I thought the doors would open up to working with the next age group. I think up-skilling myself through the FIH Academy will improve my chances of moving up to working with national programmes around the world.”

Another thing that both women have in common is a belief in the power of technology to improve coaching. And with the current Covid-19 pandemic isolating coaches from their players and each other, technology has really come into its own in the past few months. Along with fellow former Belgium international Sophie Gierts, Jouret recently headlined in one of a series of coaching webinars run by the European Hockey Federation to keep coaches connected during lock-down.

For Pholo, technology provides her with the means of keeping in contact with her athletes and monitoring their progress during the lock down. But even when normal coaching conditions prevail, the South African says technology has become a big part of her delivery. “The current generation is very attached to cellphones, tablets and computers. I have had to adapt to being better at creating documents and presentations that are not only informative but interesting to my audience.”

It is point with which Jouret concurs: “I try to use my phone, my tablet, my camera as much as possible – especially with the young ones who are even more image driven. I also use video analysis with the players at home and with the players at club to give and receive feedback as well as for analysis purposes.”

For the future, Pholo thinks technology will play an increasingly big role, particularly when it comes to coach education. “It makes connectivity so much easier. And it is ever-evolving, so it is important that we keep up with what is relevant and explore what is most effective.”

Jouret says that, for her, the future of coaching lies in the evolving roles of specialists within a coaching team. “I see the head coach as the conductor of the orchestra, he/she must master all the different aspects of the performance in order to lead it and make the right decisions.

“For example, I have now started a Masters degree in Psychology and I truly believe that we are only at the beginning of how we could use that science in sports. The brain and the heart of the players are, for me, the two essential elements that will make the difference in a top sport environment.”