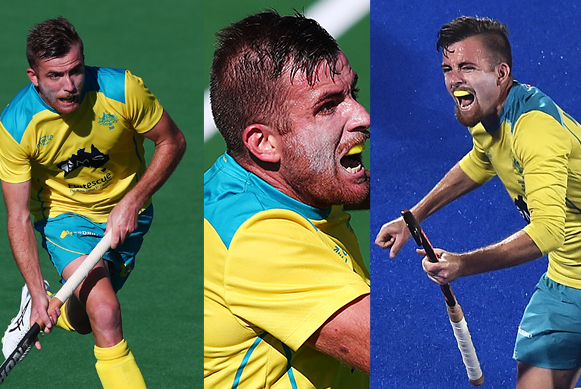 Jake Whetton is one of the Kookaburra’s long serving team players. With more than 200 international appearances to his name, Whetton has recently had his career re-ignited after moving from playing striker to a midfield role. As the vivacious Queenslander says, with a nickname such as Buzzy Bee, the energy demands of a midfield position suit his playing style perfectly.

Since the Covid-19 lock down restrictions, Whetton has also rediscovered his passion for long-distance running.

Who or what first influenced you to pick up a stick and play hockey?
Jake Whetton: “The people who first influenced me to start playing hockey were my mum and dad. They both started playing hockey when they were young and they continued playing. When me and my sister were very young we would go to the hockey fields and pretty much stay there all Saturday. It was one of those things that, obviously, as we were growing up we were always around hockey and we picked up a stick very early. Those were the people who influenced me to first do it and I can’t thank them enough for doing that I guess.”

Who has been the biggest influence on your career?
Jake Whetton: “Over the course of my career I have had a fair few people influence my career to date. One of the people early on would be Greg Browning. He was one of the youngest Australian players ever to play for the Kookaburras. He was then the Queensland Blades coach for a number of years and when I first came into the programme in Queensland, he gave me an opportunity to train with some of the Australia and Queensland Blades players when I was 16 or 17 years old. He gave me my first shot at the Australian hockey league in 2009.

I’ve had a few coaches over the time, with Matthew Wells, who is now at the Queensland Blades and the Brisbane Blaze with Hockey One. Ric Charlesworth was my first Australia hockey coach and he gave me my first opportunity to represent Australia and he is someone I have always looked up to, both as a player and with his highly decorated career as a coach. Graham Reid – I had a really good relationship wth Graham. He played at the same club as I do over in Perth. And more recently Colin Batch, who has had a really big influence by moving me back into midfield, which is a transition that I really, really like. I love now playing in the midfield. It is something I never saw myself doing but Batch and Rob Hammond set me a challenge and hopefully I am up to it. I have really been loving it for the past three or four years, playing in the midfield. It is something very different. I really love being involved in the game, so they are the main coaches that have influenced my career to date.”

What moment on the pitch are you most proud of and why?
Jake Whetton: “There is certainly numerous amounts of moments that I am proud of, not just individually but more as a team. the one that comes to mind straight away is my debut. Super, super proud of being able to represent Australia. It was a goal of mine when I was a kid and to be able to put on the green and gold for the first time was very, very special and a day I will never forget.”

It has been four years since Rio 2016, how have you changed as a player in that time?
Jake Whetton: “I guess in the past four years I have changed a fair bit. Going back to what Colin Batch set me as a challenge to energise me and put me back in the midfield. The first few years were quite trying. It was difficult to get used to the more defensive style of play that you needed in midfield. It’s not like being a striker. You are attacking and then you are defending for a little bit of the time and then you might be subbed because the subbing now is so quick in hockey. It certainly changed me as a player and I am really thankful to Batchy for putting me back there and having the trust in me to go back and play some pretty good hockey.

The Covid-19 situation has obviously impinged on everyone's preparations but what are some examples of activities that you and the squad have used to keep a sense of 'team' throughout the lock-down period?
Jake Whetton: “It has certainly been an interesting time and such a sad time for many people around the world. It is one of those things that you wish had never happened. It is just horrible to see the amount of people who have lost their lives and people going through such a difficult time with the Covid-19 stuff. It is really difficult. I guess we have been staying connected as Kookaburras through Zoom meetings. The team meetings take place online once a week and as many guys and the coaching staff who can make it just to say ‘hello’ and keep encouraging people to work out at home and to do their conditioning, running or bike riding. Just to keep motivation is high as well can. It has just been a tough time, not just for sporting teams but for all over the world. That’s just a little way we have been able to stay together in times of need.”