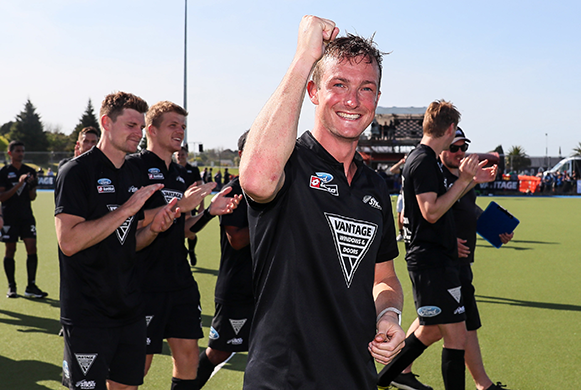 I was a doubt for Tokyo 2020, admits Black Sticks ace Hugo Inglis

In less than two weeks’ time, the Olympic Games Tokyo 2020 were due to begin. The world’s finest hockey players, representing the world’s best teams, would have been adding the finishing touches to their preparations, each athlete brimming with excitement about the prospect of competing at ‘the greatest show on earth’.

As we are all too aware, the seriousness of the COVID-19 global health pandemic triggered the postponement of the Tokyo Games by one year, with the multi-sport extravaganza now set to take place in July-August 2021.

For all athletes set to compete in Tokyo, the move from a four to a five-year Olympic cycle presented challenges. Most athletes felt the desire to push on for another 12 months, chasing that Olympic dream. For others – like New Zealand’s Gemma McCaw, who recently called time on her international career – it has proven to be a bridge too far.

For McCaw’s compatriot Hugo Inglis, the classy attacker who has scored 66 times in 232 appearances since making his Black Sticks debut in 2009, it is a very different situation. In February this year, after struggling with a back complaint for the previous eight months, he had surgery on a prolapsed disc, targeting a return to full fitness in time for Tokyo 2020. In an interview with New Zealand’s Otago Daily Times in March, Inglis admitted he knew the risks, telling reporter Adrian Seconi that competing in Tokyo “would be fantastic, but if it is too soon, it’s too soon. That’s life.”

Whilst his desire to compete at a third Olympic Games – Inglis represented the Black Sticks at both London 2012 and Rio 2016 – was one of the reasons for his decision to have the operation, it was certainly not the only one. “It is also about building my back for life”, said Inglis in the same interview. “I’ve had eight months of pain — actually it has probably been eight years of back pain.”

So, had Tokyo 2020 taken place as originally scheduled, would New Zealand’s talismanic striker have made it? In a special interview for FIH.CH, the Black Sticks striker reveals the answer to this and many other questions whilst also looking back on his stellar international career.

Hi Hugo, thank you for talking to us! Since making your debut in 2009, you have played for the Black Sticks over 230 times and scored more than 60 goals, competing at the biggest hockey competitions in the world. When you first started playing, did you ever imagine achieving everything that you have done so far in your career?
Hugo Inglis: “For me, playing for the Black Sticks just one time was a massive privilege, and it is the same every time I go out there on the field with the guys again. It’s a huge honour – I never envisioned playing 200 games for the Black Sticks. I just hoped that I’d be able to beat my brother in the back yard once!”

Looking back at your international career so far, what moment would you say that you are most proud of, and what is your biggest ambition in the years ahead?
Hugo Inglis: The moment I’m most proud of was probably a combination of my debut and representing New Zealand at the Olympic Games. For me, the Olympics were a huge dream, but just being part of the wider New Zealand Olympic team and being able to play at that major event was a pretty proud moment.”

When you were growing up, how did you first get into hockey? Who first influenced you to pick up a stick
Hugo Inglis: “When I was growing up, my brother was a massive influence. He was bigger, faster, stronger and much better than me at hockey, so I just wanted to try to press him. Some of my really good friends were playing hockey at the time. We used to go down to the turf as kids every other day, and once we got the bug, we couldn’t stop playing.”

This month would have been the start of the Tokyo 2020 Olympic Games, which has now been delayed by one year due to the COVID-19 global health pandemic. We understand that you've had a few injury issues in recent months. If the Olympics had been going ahead as planned, were you in danger of missing it through injury?
Hugo Inglis: “Yeah, I had back surgery in February of this year, in the hope of coming right for Tokyo 2020. Luckily for me, the Olympics has been postponed, but when you look at the consequences on the wider world of COVID-19, you know, the Olympics pales into insignificance. It’s fortunate with the timing, potentially, as I don’t think I would have been ready. The way the surgery has panned out, it’s taken a little bit longer to come back from. I’m hoping to be back on the field soon for the mighty Howick Pakuranga (Hockey Club) here in New Zealand.”

New Zealand earned their ticket to Tokyo thanks to two excellent victories over Korea in the FIH Hockey Olympic qualifiers in Stratford. You must have been very proud of the team’s performances against a talented and dangerous opponent.
Hugo Inglis: “The boys did really well against Korea. We prepared really well for that series, and we knew Korea was going to be a pretty tough opposition to play. They had a lot of their old guys back in the team, the likes of Jang [Jong-Hyun] and Lee [Nam-Yong], who are phenomenal hockey players. We were really well prepared for them, and the boys played really well under a high-pressure situation.”

As a double Olympian who played at both the London 2012 and Rio 2016 Games, what did it mean to both you and your family to represent New Zealand on the world's biggest sporting stage?
Hugo Inglis: “The Olympic Games is the pinnacle in hockey, and the pinnacle in most sports. For me to go to London as a 21-year-old and Rio as a 25-year-old was pretty special, and I was lucky enough to have my family over there supporting me in both Olympics. It’s a pretty special moment to run out on the field, representing your country, knowing that your parents are in the stands and you’ve got your family supporting you from back home as well. It’s been massive, and fingers crossed I can get to a third one.”

What is your best Olympic memory so far, either on or off the field?
Hugo Inglis: “My best Olympic memory is the camaraderie that we had with the wider New Zealand Olympic team. Both in London and in Rio, the New Zealand Olympic Committee did a great job to build a really special environment for all the New Zealand Olympians. As a team, we bond really tightly, and we support all the other sports. To have that experience, being part of the wider Olympic team and representing your country is something that was pretty special to me. We use a lot of the multi-cultural [aspects] to bind our team together. The Tangata whenua, the indigenous people, and their culture is super important to us here in New Zealand, and as the wider New Zealand team, we try to show that with our performances on the field.”

Finally, if you had one piece of advice you would give to aspiring young hockey players around the world, what would it be?
Hugo Inglis: ‘I always like the [advice given by former ice hockey star] Wayne Gretzky: ‘Go where the puck is going to be, not where it is’.”