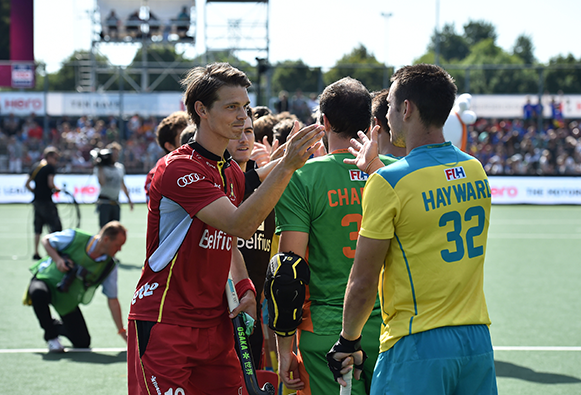 It is true to say that athletes, coaches, officials and supporters alike are looking forward to a year of hockey action with a level of anticipation that is even keener than usual. The ravages of Covid-19 on fixture schedules across the world has left the hockey community at all levels craving a return to action – be it training, league action or tournaments.

With so much cancelled or postponed in 2020, the calendar for the next few years will have an even busier feel to it as national associations, continental federations and the FIH all strive to ensure that leagues and competitions are able to proceed.

Of course, all eyes will be on Tokyo in the coming months as the postponed Olympic Games Tokyo 2020 are set to take place from 23 July to 8 August, with the hockey competition running from 24 July to 6 August. With 12 men's and 12 women’s teams, representing all five continents, all vying to be crowned Olympic champions, this is the one that hockey players dream about.

Germany’s Charlotte Stapenhorst is one player who is looking forward to the challenges of 2021 and the prospect of going one (or two) better than Germany’s bronze medal at the Rio 2016 Olympic Games.

“After one year of only training [rather than playing games], we are finally back with international competitions and tournaments. Obviously, the Olympics are the main goal but, to be honest, I am glad and happy to play any international games again. It’s been ages.

“With the pandemic still being part of our everyday life, we can’t really plan anything and everything is so fragile. No matter what, we are all aware of how privileged we are being able to do what we love and play international hockey. 2021, bring it on.”

And Agustina Gorzelany of Argentina added: "This worrying and strange way of life we are experiencing has made us realise what living is about. To enjoy the little things, such as the walk to the park or hugging a friend, someone from our family or just to share moments, but those things have become impossible to do.

"Gathering with people or, in our case with our team, was completely banned. For me, that is taking the soul from the sport. It was really difficult not to miss everything and not be be sad about it.

"So, when good news arrives and we are being told that FIH Hockey Pro-League is coming back and that even the Olympic Games is going to be held, for me is like a big great wave of energy that fills up my whole body and pushes me to train and train just thinking that there is a goal and something to keep on fighting for.

"I'm extremely excited to be able to take new opportunities and to carry on dreaming about becoming some day an Olympian."

For Belgium’s Victor Wegnez, the next Olympic Games will be his first and he is more than ready for the Games to begin.

“I was in the larger squad in 2016 but not selected for the Olympic Games, so I have been waiting for my chance for a long time. To see it cancelled was really hard, although I know it was the best choice for everyone’s safety.

“We [Belgium] were really well-placed to win gold but now, with the delay, every nation has had more time to work on what they have to. It’s going to be a real fight to the gold medal but we will be doing our best to be ready for it.”

But while the Olympics will be its most prominent part, the hockey competition jigsaw comprises many, many pieces.The FIH HockeyPro League is due to resume in February with matches between Spain and Belgium. The nine-team men’s and women’s league then continues through until the end of May, with matches between China and New Zealand women, India and New Zealand men, Germany and Australia men and women and Belgium and Netherlands men and women bringing the curtain down on the second season.

As it stands, Belgium men and Netherlands women are topping their respective leagues, but with another five months of action, a lot can change. The disruptions due to the pandemic have meant that there are large discrepancies in the number of matches played so, for instance, Germany women have only played two games, with a 100 per cent win rate, as opposed to the Netherlands, Argentina and New Zealand, who have all played eight games and who have all dropped points.

Speaking of the return to action, Victor Wegnez, says: “We are all looking forward to be back playing in the FIH HockeyPro League. Those games are really important for us because they are the only games we have before the European Championships. It is a perfect opportunity to try new things and work on our connections between players. It’s been two to three months since we played as an international team and we are looking forwards to playing together again.

“We are first in the Pro League at the moment and hopefully we can keep our first place to the very end.”

Season two of the FIH Hockey Pro League finishes in May but it is only a short wait before the global league fires into action again. Octoberheralds the start of season three, with continuous hockey featuring the best teams on the planet. The league continues until June2022 and promises to provide a smorgasbord of regular top class international hockey action.

The continental federations also have a frenetic year ahead as they hold continental championships at both senior and junior level.

The early part of the year will see the men’s and women’s Junior Africa Cup take place in Accra, Ghana and the Asia Hockey Federation (AHF) will hold its women’ s Junior Asia Cup in Japan. A few months later and the men’s event taking place in Bangladesh.

Chile plays host to the Pan American Hockey Federation (PAHF) Junior Championships in April, while later in the year, the Junior Pan American Games will take place in Colombia.

The U18 EuroHockey Championships for both genders will take place in July in Valencia, Spain.

On the senior hockey front, the men’s Asia Champions Trophy will take place in Bangladesh with the women competing in Korea.

With the men’s and women’s World Cups on the horizon, the continental qualifiers will determine who will be participating in these. The first of these to take place will be the 12th Oceania Cup, which will take place in April. The hotly contested EuroHockey Championships are scheduled for June in the Netherlands, while the Africa Cup of Nations and the Asia Cup are still to have dates confirmed.

The Pan American Cup, which serves as the PAHF continental qualifier will take place in Chile in January 2022.

PAHF turns its attention indoors in June with the Indoor Pan American Cup, which will be the qualifying event for the rescheduled men’s and women’s 6th Indoor World Cup, taking place in February 2022 in Belgium.

Of course, this is a non-exhaustive list, since there will be many more hockey events happening around the world.

After a year of living with very little live hockey action to participate in or watch, there is a hunger for hockey at every level. With a full calendar of events to look forwards to, that hunger is being satiated to an even greater level.