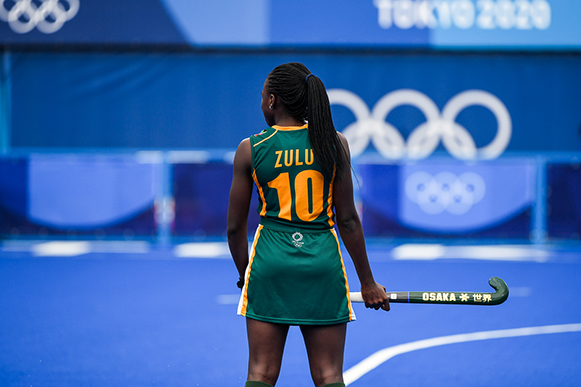 In this series of interviews we meet stars past and present as the international hockey community gets ready for the excitement and drama of the men’s and women’s FIH Hockey Junior World Cups.

Our first interview in the series is a two part conversation between South African legend of the game Marsha Cox and two athletes who hope to be on the podium in Potchefstroom, South Africa  and Guwahati, India respectively – Onthatile Zulu and Guy Morgan.

Cox needs very little introduction. The former South African midfielder represented her country at three Olympic Games and four World Cups. She remains the most capped player for a South African sports team, male or female with more than 330 caps.

Despite her youth, 21-year-old Onthatile Zulu is no stranger to big stage hockey. Along with Edith Molikoe, the forward was a member of the South African team that competed firstly in the African Olympic Qualifiers and then at the Olympic Games Tokyo 2020. Zulu says she is excited to be taking all she learnt in Tokyo with the senior team and supporting her team mates to compete to those same high standards.

Guy Morgan is captain of the men’s team heading to India. His taste of the big time came when he led the squad at the Africa Youth Games in 2018. As he contemplates the pressure and excitement of competing in the cauldron of an event in India, Morgan says that he and his team have their eyes firmly set on a place on the podium.

During the conversation, both Zulu and Morgan explained that training and preparations for the Junior World Cups have been hugely disrupted by Covid. Where, in a normal year, the squads would have been playing inter-provincial competitions and matches against other nations and getting plenty of international experience, this simply hasn’t been the case. Nonetheless, both athletes agreed that the months of inter-squad training and team Zoom calls had left them in a place where they knew their team mates very well; probably better, in many ways, than would normally be the case.

“We have missed out on the experience of tournament hockey, but we have made the most of what we have had. We have still maximised on the time we have had. The Zoom calls allowed a whole new aspect of getting to know each other. We are in a really good place,” says Morgan, adding that each team call kicked off with a joke, although he couldn’t be persuaded to share any of these during the interview!

“With the little contact time we have had, we have made the most of it. And hopefully we will have a competition against India just ahead of the competition, so that will be great,” added Zulu. “Over this time we have learnt a lot more about each other. We all come from different backgrounds and have different experiences and this time has given us a chance to get to know each other.”

“I am really excited to spark that motivation among little children, who will see us play and think that they want to play for South Africa one day,” she added. “Having our family there will be an extra push to do event better.”

For Morgan, the prospect of going to India is something that he says he cannot even imagine just yet. “Just walking into that stadium will be unreal.”

The second part of this interview will be published on Wednesday 8 September.