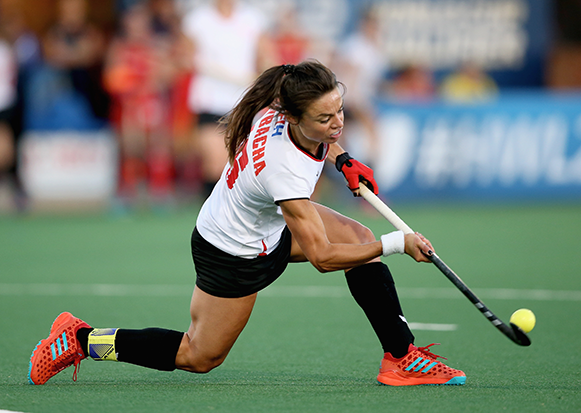 Playing hockey in a different country has a number of benefits, including playing alongside other international players, so always experiencing top quality hockey; being part of a different playing system, which expands game understanding; and working with different coaches – again a way of increasing and expanding knowledge of the game.

Additionally, players will also get to develop as people, as they experience new cultures and are exposed to different ways of life. 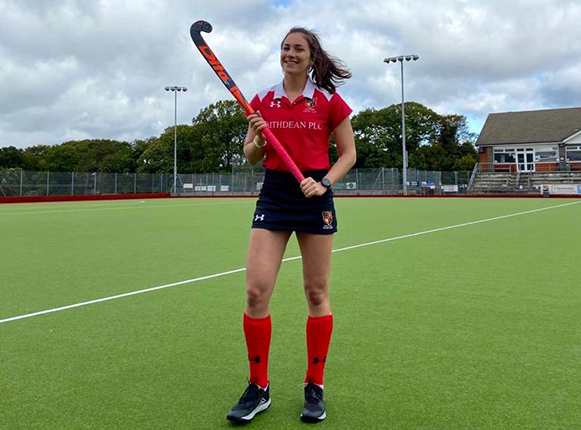 Corey Mayer is one player who is willing to travel to achieve her dreams.The 23-year-old USA development player joined English Premier Hockey League club Holcombe earlier this season after she finished her studies at James Madison University in Virginia, USA.

In January 2020 Mayer was selected for the USA development team and this whet her appetite to play hockey for longer than the American collegiate system usually allows for. With very little in the way of adult club hockey in the USA, Corey knew that she needed to look elsewhere if she was to continue along her path to a place on the national squad. And this, she realised, was something she really, really wanted.

“One glimpse of a national training camp in February made me realise that I still wanted to play hockey at the highest level possible, says the striker. “I knew I had to play abroad to get the experience and confidence to play at the top level.”

It is a move that is fully supported by the USA national team coaching staff, with many of the development squad travelling to mainland Europe and the UK to play in the tough domestic leagues.

“Knowing that other teammates were doing it and committing to it, made it easier to make the move to a different country and a different lifestyle,” says Mayer. “I get to play alongside athletes who have been to the biggest tournaments in the world. I knew I wanted to play at a level where both the coaches and the other players would push me to get better technically and tactically. At the same time, I would grow as a person through experiencing different cultures.”

To support herself during her time in the UK, Corey has been doing coaching at the club. One of her first sessions was with a group of under eight boys, an experience that the US striker says was “just so much fun.”

Away from the pitch, Corey and her fellow overseas players have explored parts of the UK when and where it has been safe to travel. But, although this is all a new and exciting experience, the short and long-term goals of this dedicated athlete are all about achieving as highly as she can in her sport. 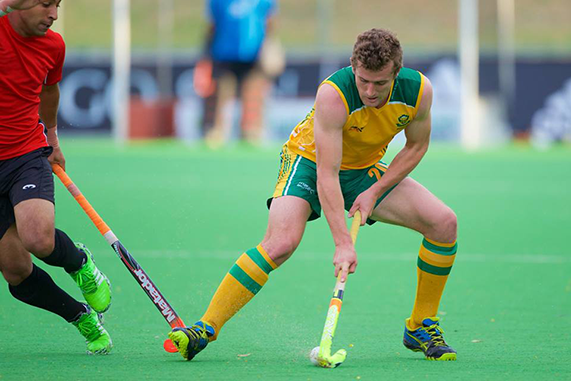 Another athlete who has travelled across continents to play hockey is South African international Matt Guise-Brown, who plays hockey for Hampstead and Westminster in the UK.

“When I left the University of Pretoria in 2014, I knew I wanted to do something different and to experience a different part of the world. I met Jonty Robinson [a former South Africa national team player] who was player coach at Southgate Hockey Club at the time, so I joined him there. I spent two seasons there before moving to my current club. The whole idea was that I would come overseas and play in a league that was stronger than the leagues in South Africa.”

Guise-Brown explains that South Africa is so vast that there is no chance of the top 10 teams in the country playing in one league as they do in England.

Guise-Brown is loving his life in the UK and has enjoyed much success with Hampstead and Westminster. He has a job teaching in a local junior school and has a strong and wide network of friends. But, he says, moving abroad to play in a new country is not always a case of ‘living the dream’.

“Of course, there are lots of positives to moving abroad. But it is difficult to come from a place where you have lots of mates and family and you feel comfortable, to a place where you don’t really know anyone. I genuinely didn’t have any mates when I first arrived and it takes time to build relationships that have serious meaning in them. It can be lonely at times."

On a lighter note, Guise-Brown adds: "And, of course, I have moved to a country which seems to have winter for eight months of the year."

Another well-travelled hockey player is Poland’s captain Marlena Rybacha. She agrees with Guise-Brown that it isn’t always easy to leave your own comfort zone and try to make a success of playing hockey elsewhere.

“Often, the hockey at the beginning doesn’t go as well as expected as it can take time to adjust, so it’s crucial to stay focused on the reason why you came to play abroad in the first place and don’t give up. Things mostly will go well, sometimes it just needs a little time and patience.”

Rybacha has spent a decade playing in the Netherlands. She currently plays her hockey at hugely successful HC Oranje-Rood in the Netherlands, a club she joined in 2016, after a few seasons with another Dutch club, MOP Vught.

Explaining why she plays her club hockey in the Netherlands rather than in Poland, the 33-year-old says: “The Netherlands has one of the best competitions in the world. I always had the ambition to compete a the highest level I can. So for me there was no other option than trying to play in the Dutch competition. That has worked out and now I am playing my 10th season here in The Netherlands.”

Rybacha says her decade of Dutch hockey has transformed her as a player. “I have grown into a more complete player – tactically, technically, physically and mentally.  As the level is so high it attracts the best hockey talents from all over the world, to compete here. It’s not just about hockey skills but also mental strength, confidence, discipline and consistency. I’ve learnt to continually push myself to learn and evolve as a player to keep up with the rate at which hockey as a sport is developing.”

And it is not just the hockey that has won approval from the gregarious Polish player. “I really like the relaxed lifestyle of Dutch people. Obviously hockey is really popular here so it makes it special for me. But also life outside of hockey is great. Lunch/dinner in the city or “borrelen” (afternoon/ evening drinks and snacks) or my favourite, coffee dates, are really popular here.

“In my opinion it is the best opportunity to improve and develop as a player. Going abroad alone is definitely not easy, in fact it can take you well outside your comfort zone. But it helps to toughen you up a bit and shape character. When you are there, it’s important to stay connected with your teammates, especially in free time outside of hockey. The helps to get that family feeling and will make you feel like you belong as a part of the team.”