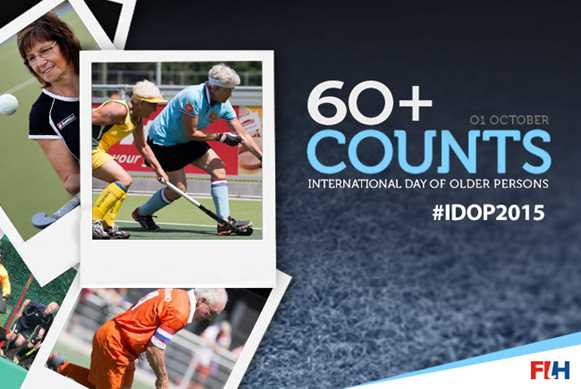 1 October marks the 25th anniversary of International Day of Older Persons, with age inclusivity one of the key focuses of this year's celebrations.

This particular area resonates strongly with the sport of hockey, which is played and enjoyed by people of all ages around the world, from grassroots level to Masters.

The sport offers a number of health benefits, but, in addition to that, it is particularly appealing for older persons for many other reasons.

“The thing about Masters Hockey,” muses Debbie Wilkes, organiser of the EuroHockey Masters Tournament, “Is that it gives people, especially women, their identity back.”

Wilkes’ point is that playing a sport into your middle and late age doesn't just provide a physical health benefit, it is also good for social and psychological reasons.

As part of the United Nations International Day of Older Persons, FIH took a look at some of the benefits of playing hockey; benefits that are driving up numbers returning to or continuing to play hockey well into their 60s, 70s or even 80s.

“So many women spend their 20s and 30s being 'Mum'”, says Wilkes. "They run their kids to matches and practices, they wash the kit, they might do a bit of junior coaching, but at the end of the day, they are not the focus, they are not part of the team that is playing on the pitch. Masters hockey gives that feeling of self-confidence and worth back to people, particularly at a time when age is becoming an issue in so many other aspects of their lives."

Certainly team sports have been proven to have a positive impact upon psychological health. Both the Mayo Clinic and Duke University in the USA agree that regular participation in team sports reduces stress, boosts self-confidence and gives a feeling of mastery and control.

In the journal Medicine and Science in Sports and Exercise, Neha John-Henderson writes: “People who participate in club sports enjoy better mental health and life satisfaction than those who exercise at a gym or alone.”

Then there are the well-documented physical benefits of sport. Research released earlier this year by Ingar Holme, lead researcher on the Oslo Study, found that elderly people who do a minimum of 30 minutes of physical activity, six days a week are likely to live longer than their 'couch potato' peers. “A mortality reduction of 40 percent was associated with a moderate amount of time [30 minutes, 6 times a week], irrespective of whether the activity was light or vigorous,” the study said.

So really, there is little wonder that the Masters hockey scene is one of the biggest growth areas in our sport, particularly in Europe and Oceania.

The increase in teams participating in regional and state leagues, national and international competitions has risen incredibly fast in the past few years. More than 90 teams across all Masters age categories took part in the EuroHockey Masters in London this August and in October, 1,500 players will participate in the Australian Masters Games to be held in Cairns.

Here are some of the reasons for playing hockey for as long as you can:

· Health - live longer than sedentary peers; enjoy better brain health.
· Challenge - whatever your age, you still have that desire to win.
· Friendship - competing in matches strengthens bonds with teammates and developed enduring relationships because participants remember shared experiences - with competitors as well as teammates.

And if any 60 or 70 year old is reading this and still wondering if it is time to hang up their stick, then they could consider challenging the world record for the world’s oldest hockey player.

“I started when I was 14 and I have just been playing ever since” said the great-grandmother. She played her last competitive game last year, deciding that a minor stroke had meant she was no longer able to contribute so well on the pitch. The record was broken in June 2014, but has only just been ratified.

To read the full article on Marie Larson, visit the Daily Mail website by clicking here.