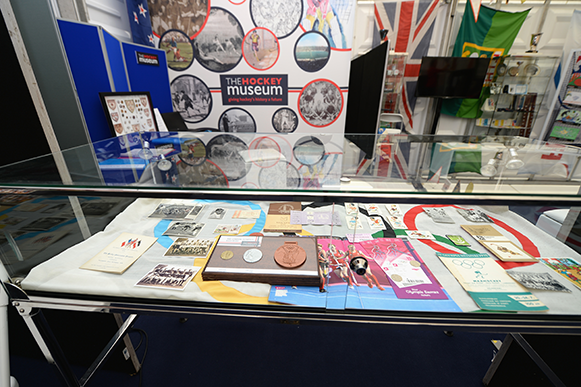 ‘Hockey Through The Ages’: Hockey Museum | FIH webinar to take place on Thursday

At a time when we are celebrating the long history of hockey at the Olympic Games, we are thrilled to reveal details of a special live webinar brought to you by The Hockey Museum, in partnership with the FIH World Hockey membership scheme.

On Thursday 30 July, the Hockey Through The Ages webinar will be hosted by former Great Britain goalkeeper and triple Olympian Simon Mason, who will be in conversation with Mike Smith, Curator and Founding Trustee of The Hockey Museum.

The Hockey Museum, based in Woking, England, is the first and only museum of hockey in the world. It aims to preserve, share and celebrate the rich history and heritage of the sport of hockey from all round the world. The museum is home to a growing collection of hockey archives, artefacts and memorabilia, which it makes accessible to the hockey family and the wider public through its website, newsletters, displays and other exhibitions.

Simon and Mike will take you on a journey through hockey`s history and discover some of the moments, people and events that have defined the personality of hockey. Hear about the growth of The Hockey Museum, the 'wow' moments, world class recognition, and future ambitions.

Hockey’s wonderful role in the Olympic movement will be one of many topics covered in what is sure to be a fascinating discussion, which will be centre around The Hockey Museum’s superb efforts in preserving hockey’s heritage for future generations.

Whatever your role in the hockey family, you will not fail to be inspired by the incredible stories that make up the rich history of the game we love, a history that is protected and nurtured by an amazing team of staff, trustees, volunteers and supporters at The Hockey Museum.

If you would like to register for the event, you can do so on a dedicated page on the FIH Hockey Academy website using the link below. Those who register for the webinar are encouraged to make a small financial contribution to The Hockey Museum, which is a registered charity in the UK, to help with their ongoing work to preserve and archive the sport’s rich history.

To learn more about the tireless work of The Hockey Museum, please visit https://www.hockeymuseum.net.

On this day – 28 July 1996: Australia women cruised to a 4-0 win over USA on-route to winning Olympic gold at Atlanta 1996, with Jen Morris, Katrina Powell, Lisa Powell and Kate Starre scoring the goals. In the men’s competition, eventual silver medallists Spain suffered their only defeat in Group A, going down 3-1 to India. Spain went into the game knowing that they had already finished top of the standings to seal their place in the semi-finals, with Germany finishing second in the Group – two points clear of third-placed India – to also reach the final four.