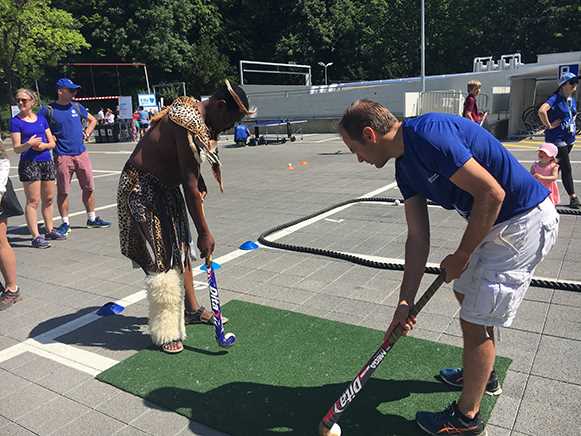 Hundreds of people from all walks of life stopped to try out hockey in Geneva Photo: FIH

Hockey joined in the major health promotion event “Walk the Talk” on 20 May 2018 in Geneva, Switzerland organised as part of the celebrations of the World Health Organization’s (WHO) 70th anniversary.

Together with local Hockey Club Servette Geneva and Generation Games, FIH organised a hockey initiation programme for the public to demonstrate the fun and action of our sport.

Hundreds of people, including WHO Director General Dr Tedros Adhanom Ghebreyesus, stopped at the hockey field and picked up a stick to dribble, pass and shoot goals.

Experts from federal, cantonal and city authorities, United Nations (UN) agencies, permanent missions of a variety of countries to the UN, NGOs and academia also participated  in “Walk the Talk”.

Regular physical activity, including hockey, not only makes you feel good, it has significant benefits for health. It reduces the risk of cardiovascular disease, diabetes and some cancers, helps control weight, and contributes to mental well-being. Taking part in physical activity also increases opportunities for making friends and feeling part of the community.

To that effect, insufficient physical activity is one of the leading risk factors for death worldwide. WHO research shows that globally, more than 80% of the world's adolescent population is insufficiently physically active.

The drop in physical activity is partly due to inaction during leisure time and sedentary behaviour on the job and at home. Likewise, an increase in the use of "passive" modes of transportation also contributes to insufficient physical activity.

WHO Member States have agreed to reduce insufficient physical activity by 10% by 2025. FIH and the hockey community are committed to support this important cause.

Hockey is highly inclusive - a true 'sport for all'. At all levels, it is played by as many girls and women as by boys and men which makes it 'Equally Amazing'.

Hockey is also a game that is played for life, supported by the player numbers growing at both ends of youth and masters.

A true family game, hockey venues around the world often see several generations playing on the same day, which was also very true for hockey at “Walk the Talk” which attracted in particular kids with their parents.

People with impairments can practise hockey and the sport is also played increasingly in developing and development countries.

In this regard, the FIH’s Targeted Assistance Programme (TAP) supports Continental Federations and National Associations to conduct long-term sustainable development projects or programmes, especially where there is a lack of financial resources.

Finally yet importantly, hockey can be played in very different settings, be it indoors, outdoors, on the beach, on differently sized fields etc. and varying formats.

The urban setting with a small-sized field in Geneva during “Walk the Talk” is an excellent example.