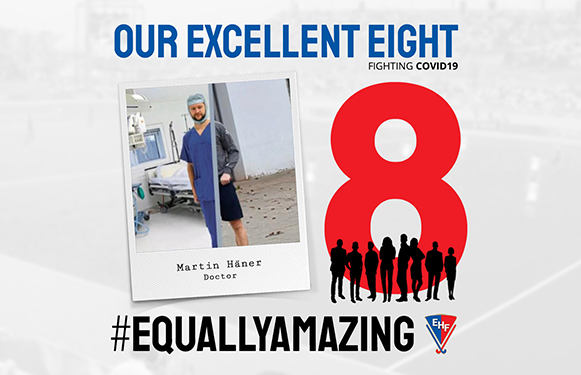 Stories from the hockey community usually relate to playing, umpiring and developing the game, but recently the European Hockey Federation (EHF) set about celebrating the people from across the world of hockey who have put aside sticks and whistles to play their part in the fight against Covid-19.

From social media and news items, we know the eight people featured in the EHF Excellent Eight campaign are just a very few of the thousands of members of the global hockey community who are taking their place on the frontline of the virus that has turned the entire world on its head in the past five months.

Among the stories featured in the Excellent Eight series were national team players who are doctors, umpires who are frontline nurses, Olympic medallists who work for government departments immersed in food production.

Marijke Fleuren is president of the European Hockey Federation and it was her idea, along with communications manager Siobhan Madeley to tell these stories. Freelance writer Sarah Juggins was brought in to bring the stories to life. “We were aware of a number of our members playing really vital roles in this battle against Covid-19,” said Fleuren. “We wanted to tell the stories of these people who are, in many cases, putting their lives on the line on a daily basis. What emerged was a series of really emotional and inspirational stories. We called them our Excellent Eight, but we see them as representing everyone from the hockey community who are playing their part under really difficult circumstances. they are all heroes.”

Take, for example, Peter Elders. A former international umpire, he is currently a board member with both the European Hockey Federation and the KNHB. 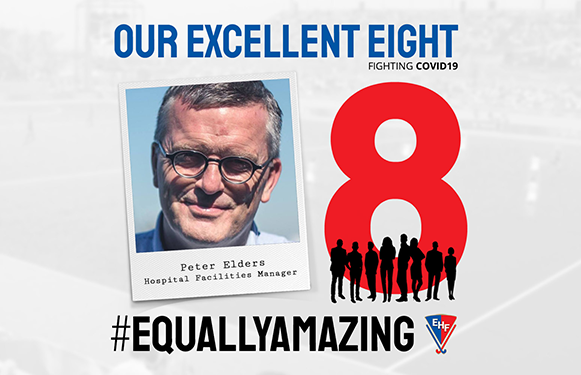 But for now, all thoughts of hockey are put to one side because Peter’s day job is proving vitally important right now. He is facility services manager for two large hospitals in the Netherlands and currently he is spending every minute of his working day ensuring the hospitals are ready to receive the expected influx of Covid-19 patients.

“Basically my work load has doubled,” says Peter. “It is extremely busy as we are changing so many things in the hospital, just to be prepared for what is about to come. Doubling the number of Intensive Care beds, changing four, or maybe later more wings, into a designated Covid-zone.”

Lorenza Di Guardo of the Italian Hockey Federation is an Italian doctor specialising in oncology – the treatment of people with cancer. She says that the current Covid-19 crisis has completely changed the lives of herself and her patients. 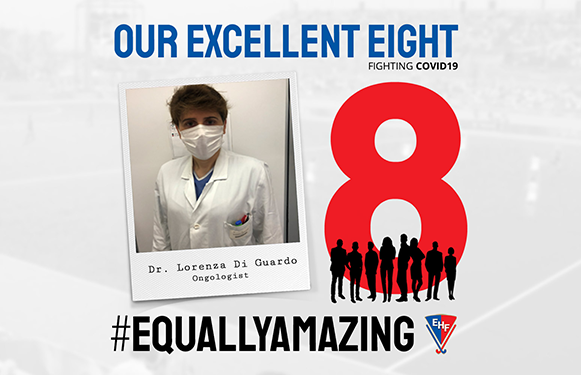 You can sense the grief and emotion in Lorenza’s voice as she says: “Doctors and nurses are the professionals most exposed to the risk of contracting the infection and many doctors in Italy unfortunately have died from Covid-19. Moreover, there is also the higher risk of contracting and dying from the illness for our patients with cancer due to their compromised immune defences.

“I personally feel as if I’m living at war against an insidious invisible enemy who is not facing up to anyone. Experiencing so many deaths every day in Italy is emotionally very tough.”

During this traumatic past few weeks, Lorenza says that some of the qualities she developed on the hockey pitch – team work, facing challenges and a sense of belonging – have been invaluable to her work in the hospital.

Two Olympic gold medallists have also been playing their part. Germany’s Martin Häner is a qualified doctor, passing his finals in April 2018. He is now a practising orthopaedic surgeon, although orthopaedic surgery have been set aside as doctors from all disciplines are being called into the battle to contain and prevent Corona Virus. “For me and my colleagues, everyday life as an orthopedist and trauma surgeon has changed a lot,” says Martin. 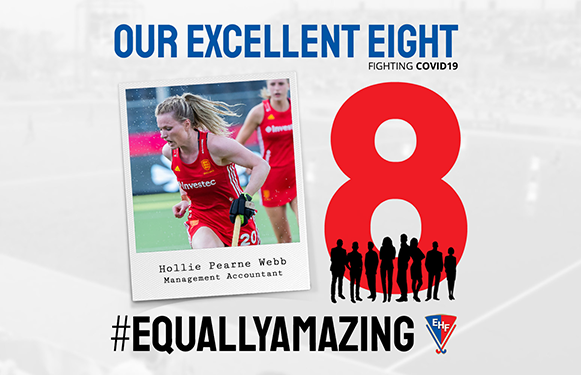 Away from the hockey pitch, Great Britain and England captain Hollie Pearne-Webb works for the Department for Environment, Food and Rural Affairs (DEFRA). It is the department responsible for safeguarding the natural environment, supporting the food and farming industry and sustaining the rural economy. During this crisis, Defra is playing a huge role in ensuring that the food chain continues to provide for the population.

The department is facing challenges on many fronts, as Hollie explains: “The main challenges facing the agriculture and food production industry currently is the increased demand for the supply of food, the shortage of and difficulties of a rural workforce in order to harvest crops at this time.” 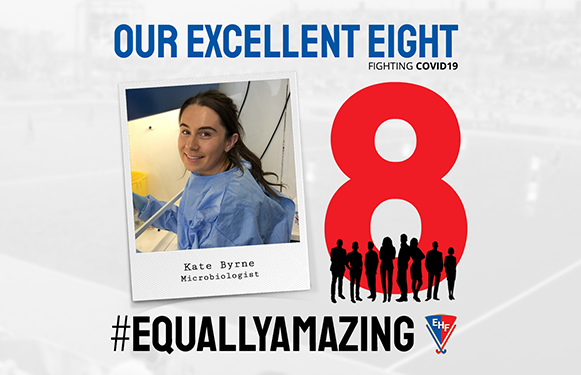 In Ireland, hockey player Kate Bryne is one of the scientists tasked with developing tests for the virus.

Operating out of a diagnostic microbiology lab in an acute adult hospital in Dublin, Kate and her colleagues normally investigate clinical specimens when bacterial, viral or fungal infections are suspected. This includes infections such as blood stream infections, pneumonia and meningitis. As Kate says: “These infections are still occurring, so we are contain using routine testing alongside COVID-19 testing. It is really all-go at the moment.”

When the demand for COVID-19 testing began the lab did not have the appropriate test available. But, the scientists were swift to meet the challenge and soon the test was validated and implemented. Testing is carried out seven days a week.

For now Kate’s world is one of sterile walls and testing equipment but she is looking forward to the day she can step back on the hockey pitch, although as she adds with a smile: “Can you imagine the pain we’ll be in the day after?! The legs will be in bits!” 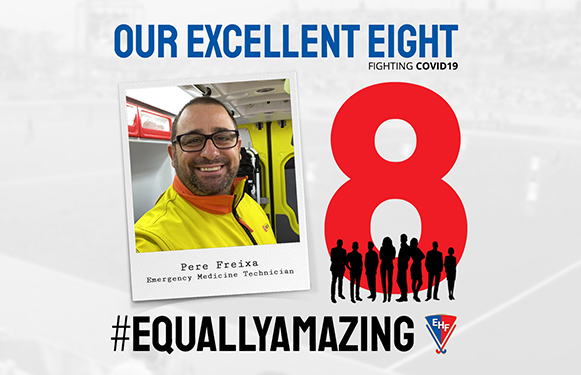 Away from the hockey club, Pere is an ambulance driver and paramedic with Falck VL – a company providing fire, health and assistance services throughout Spain.

“During this Covid-19 situation, there are elderly people who are alone at home and have no help. If we need to transfer them to the hospital, there is the possibility of their family not being able to see them at all. Just a week ago I took a 75-year-old woman with suspected Covid-19 to the hospital. On the way, she told me that her children were working in Madrid. The conversation went straight to my heart. I gave her my phone number and told her she could contact me any time she wanted to. Tragically, two days later the lady died. These are hard times, but we have to keep going.”

The final two members of the Excellent Eight are both nurses. Maxime Chéron plays hockey at the Racing Club de France. In his working life, Maxime is a nurse at the Institut Curie in Paris, a hospital specialising in oncology. 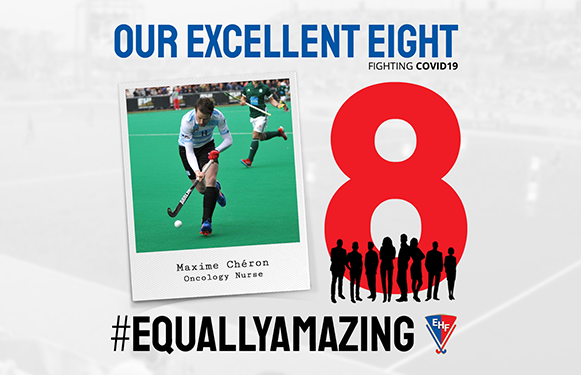 As part of the Research and Wound Care Unit, Maxime’s normal work routine saw him taking care of cancer patients, particularly those with complex wounds, related to their cancer or their treatments. That routine has now been blown out of all recognition as the hospital has been set up a new organisation to deal with the Coronavirus.

Now Maxime is part of the team that rapidly identifies patients with the first symptoms of COVID-19 – fever, cough, breathing difficulties. If one of these criteria is identified, then the patient is referred to an emergency physician for screening for COVID- 19, in order to be examined and referred to a care pathway adapted to his or her condition. It allows the patient, when possible, to continue cancer treatment while limiting the spread of the epidemic throughout the hospital.

Maxine says: “We are currently working with extreme vigilance. Our biggest fear is the spread of COVID-19 in the hospital. But we are prepared if that should happen.” 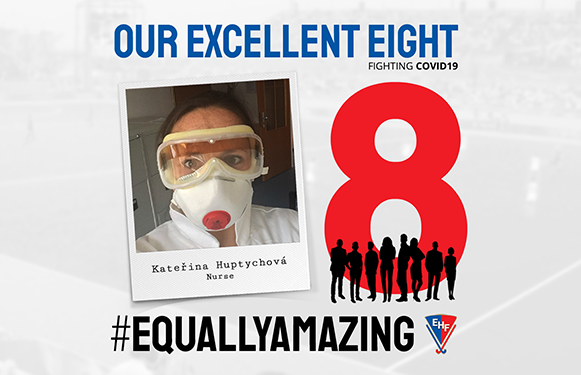 Kateřina Huptychová is a hockey player and EHF judge from the Czech Republic. In the fight to contain Covid-19, Kateřina’s job has changed from face-to-face patient assessments to a situation now where illnesses are being diagnosed and treated remotely – by phone mainly.

Kateřina helps out with these phone calls, listening to patients, asking questions, preparing prescriptions, emailing to arrange further tests and x-rays and offering a sympathetic voice. “We rarely see a patient now,” she says. “One reason for this is that we do not have enough protective aids to work properly. We hope that patients will keep this attitude [staying away from the doctor’s surgery] until it is safe again.”

Despite the bleak times, Kateřina remains upbeat: “The bright side of being tired and suffering from a  lack of sleep are the many messages from family and friends from all over the world and the hope that everything comes to an end. We all have to learn from the mistakes. But we must be optimistic, patient, tolerant, careful and appreciative of each other.”