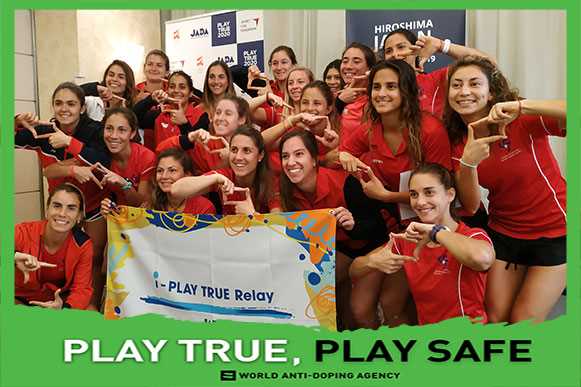 It is a feather in the cap for FIH as its focus on educating athletes about anti-doping measures has been recognised as one of the leading examples in international sport.

From next year, the World Anti-Doping Agency (WADA) Code will include the requirement for all International Federations to raise their game when it comes to educating athletes about anti-doping issues. It is a road already well travelled by FIH, who have made it mandatory for all athletes to undergo WADA’s anti-doping online course prior to being allowed to compete in an international event and during 2019, FIH also introduced anti-doping education booths at three major events.

While awareness of anti-doping will be raised a few notches on Play True Day – which takes place on 9 April – for hockey, as with most other sports, anti-doping is a 365 days a year issue.

Hockey, as a great supporter of WADA, will be throwing its weight behind Play True Day, a WADA-led initiative, to raise awareness amongst athletes and the broader sporting community of the importance and desirability of clean and fair sport. The phrase “Play True” encapsulates the aim of ensuring that sport is played on a fair and drug or doping-free basis.

Talking about hockey’s approach to anti-doping, FIH Sport and Development Director Jon Wyatt says: “We are really proud that we have a very low level of doping and cheating in hockey. In 2019 we had no adverse findings which is fantastic. WADA publish a league table on an annual basis and our numbers of adverse findings have been very low for many years now.

“Anti-doping is expensive so sports that have a problem with doping have to spend a large amount of money doing a lot of testing. We are in the fortunate position that we don’t have a major doping issue within hockey, so are able to control this and satisfy WADA’s requirements by conducting a relatively small number of team tests. That doesn’t mean we are complacent - far from it – and in competition and out of competition testing can occur at any time on any member of a squad, so the deterrent is very much still there

Wyatt is also keen to make it clear that anti-doping is a far from straightforward process. He relates how two years ago there were a small but significant number of adverse findings from a single competition. A swift investigation, supported by WADA and the relevant National Anti-Doping Organisation (NADO) discovered that the athletes had all unknowingly eaten contaminated meat products at the same hotel. There was nothing wrong with the food, it is common practice in some countries, but the substances are on WADA’s anti-doping list. The processes in place and the collaborative work with the authorities meant the situation was resolved quickly.

Of course, while the athletes involved had no idea about the presence of contaminant in the meat, the case did highlight the incredible levels of vigilance that all athletes must adopt and this is where the FIH education programme comes into its own.

“The thing we are very proud of and the thing we spend more time on than testing, is our education programme,” says Wyatt. “At every senior FIH event it is mandatory that all the athletes complete an online WADA anti-doping course and have a certificate to prove it. The athletes have to re-take the course every two years.”

The completion of the online course is registered with the FIH and it is the responsibility of the national association to collect the athletes’ certificates and send them to FIH ahead of a tournament.

In 2019, in response to a survey completed by athletes, FIH introduced education and information booths at the FIH Series Finals events in Malaysia and Japan as well as at the FIH Pro League Grand Finals in the Netherlands. The booths were in situ at the venues and at the athlete hotels. In addition, at the event in the Netherlands, the booths were also open to the public to help raise public awareness.

For the future, FIH is planning on delivering booths at junior events. As Wyatt says: “This is where the athletes’ education on anti-doping has to start. It is such a complex area. The public see it as a simple black and white matter – you are either a drugs cheat or you are clean, but it is important for athletes to realise that even some simple cough and cold remedies contain banned substances. The bottom line is – always ask your Team Doctor, don’t take chances before considering taking any supplement or medication. Our education courses hammer that home.”

Also showing their support for Play True Day are the Asia Hockey Federation who have shared the following article.