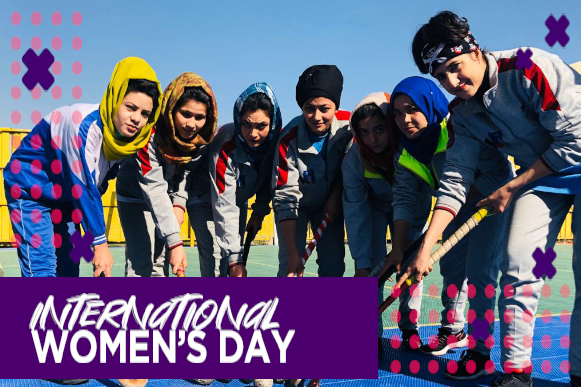 Life is tough for girls and women in Afghanistan whether it is accessing education, finding training and work or participating in sport.

In the following extract, the Afghanistan Hockey Federation tells the story of the captain of the national women's team, Khadijah Achakzai, outlining the hope within the Afghan hockey community that one day Afghanistan will be competing on the international stage.

“Khadija Achakzai toils day and night at the hockey training grounds in Afghanistan. She is the hope and the idol for many of her female peers in Afghanistan, where due to the current circumstances, it is very tough for women to even attend school or university, let alone take part in a sport such as hockey.

“However, Khadija is one of the very few examples in the country which take the form of the light at the end of a very dark tunnel. She is fully committed to the sport of hockey and takes it upon herself as a mission to push other Afghani women to not give up hope and take up activities such as hockey for their personal growth.

“Khadija started her hockey journey at a very young age, when she was in class nine. It was a bit too much for her at first, but she remained committed with an iron resolve. In time, the skills needed to play hockey started coming to her naturally and it transformed from an interest into a passion, which she pursued vehemently.

“Over the course of her sporting career, Khadija has amassed an impressive collection of appreciation letters and awards from various organisations, including the National Olympic Committee and the Peace Association of Afghanistan among notable others.

“With International Women’s Day upon us, Khadija’s story is an inspirational one for women across the globe. Despite all the odds, she is pursuing her passion and urges her fellow countrywomen to do the same. She is a true role model for young girls all across the globe and we can only wish her the best of luck in her career as a hockey athlete.”

Picking up on the narrative, Taimoor Waqar, speaking on behalf of the Asian Hockey Federation, says: The AHF is compassionate towards the difficult situation faced by the women in Afghanistan on a daily basis. We are working very closely with Afghanistan Hockey Federation towards the development of women’s hockey in Afghanistan. Our aim is to empower women like Khadija Achakzai who aspire to rise above their circumstances and face the challenges head on.

“With the help of her and Afghanistan Hockey Federation, we our focusing on Youth Development Programmes for Women in Afghanistan at school level. We are very happy with the progress that has been made and we are working very hard to provide a platform for the determined and devoted women of Afghanistan. Yes, it is only just a start, but with such steps we may see the Afghanistan national women’s team participating in international tournaments in the future.