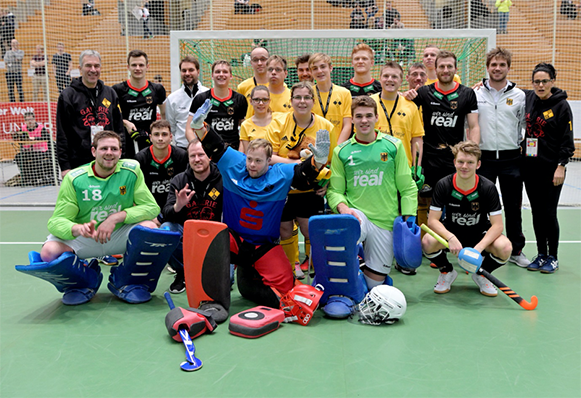 Hockey has always aspired to be an exceptional sport when it comes to inclusivity, which is why the Hockey ID Festival which ran alongside the EuroHockey Indoor Nations Championships (Men) was such a triumph.

DHB, the German national hockey association, ran the fully inclusive event in Berlin at the Horst-Korber Sportzenrum from 17-19 January. Eight nations competed in the Championships, with the host nation running out as winners after they defeated reigning Indoor World Cup holders Austria 6-3 in the final.

As part of the event, DHB staged a Hockey ID festival with teams from four different regions of Germany playing a round robin tournament on the main arena. The competing teams came from Berlin, Monchengladbach, Hamburg and Kostitz (near Leipzig). An enthusiastic crowd cheered the teams on as they competed during the mid day break.

Norman Hughes, who is the FIH Hockey ID Project lead, said: “DHB did a fantastic job programming the EuroHockey Indoor Championships Men to allow a two-hour slot for Hockey ID to be showcased to a large audience.

“Such opportunities are essential to promote the growth of Hockey ID and to raise awareness. Hockey ID players got to experience the thrill of the big arena and large crowds cheering them on.”

In an important move for the future of ID Hockey, meetings took place during the event between FIH/DHB and Special Olympics officials. In 2023 the Special Olympics World Summer Games is hosted by the city of Berlin and Hockey ID demonstrated it’s desire to be a demonstration sport for the very first time at this major world sports event.