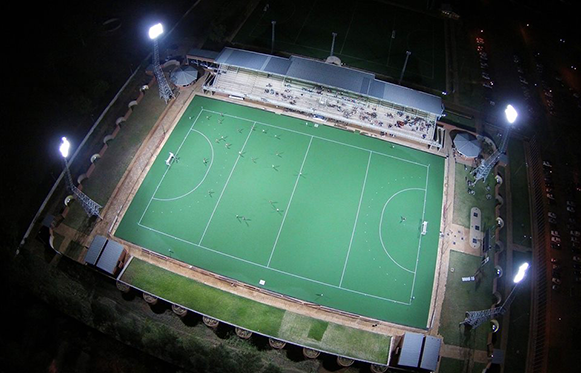 For one weekend in December hockey players will be royalty in the City of Kings as the Hockey Series Open (HSO) travels to Bulawayo in Zimbabwe.

The men's and women's tournament is one more step along the developmental pathway for a nation that has a golden hockey heritage but has been in a bit of a wilderness since its women's team famously won Olympic gold at the 1980 Moscow Olympics.

Sarah Bennett is one of the eight committee members for the Hockey Association of Zimbabwe (HAZ), which is committed to putting the African nation back on the map of key hockey-playing nations. She took time out from her technical official duties at the Wanglibao Hockey Champions Trophy Changzhou Wujin, to talk about hockey's future in her home nation.

Zimbabwe's future lies in growing from the schools and colleges upwards. The girl's squad recently qualified for the Junior World Cup and many of the team also gained international experience playing in the Youth Olympic Games in Buenos Aires.

"We have a new development plan, for the first time ever we held an indoor hockey test series and we have also taken the concept of the Pro Series Indoor (PSI) and that seems to be working. There is no doubt that the sport is growing in popularity," says Bennett.

Much to the HAZ's delight, schools across the country are also buying into hockey as a sport that should be on the curriculum.

"There are more than 100 government schools in Harare that have hockey on the curriculum. We support the schools by running courses for all levels of coaching and umpiring – from basic to advanced level."

An exciting development for hockey in the capital city is HAZ's proposal to get the Magamba Hockey Stadium in Harare refurbished to the same international standard as the world class facility at the Khumalo Hockey Stadium in Bulawayo. If this vision is realised then Zimbabwe would have two potential hockey centres and could really start to push to host international fixtures in world class facilities.

HAZ has also been awarded Olympic Solidarity by the national Olympic Committee and, on the back of that, a new coach will be arriving later in the month to help drive standards of hockey coaching upwards.

Another very positive move, and one that perfectly fits the FIH 'equally amazing' message is the appointment of Zimbabwe's first female minister of Youth, Sport, Arts and Recreation. Kirsty Coventry is a sporting legend, having won gold, silver and bronze medals for the Zimbabwe swimming team at the Athens and Beijing Olympic Games.

"Kirsty Coventry is passionate about sport, so having achieved what she has achieved, she knows what is needed to raise levels and reach the standard that is required to compete internationally," says Bennett.

In addition to her role at the Ministry, Coventry was also Zimbabwe's Chef de Mission for the Buenos Aires Youth Olympics and sits on the IOC and the Zimbabwe Olympic Committee.

"She [Coventry] will clean up sport in Zimbabwe," says Bennett, "in fact, she has already begun that process. Sports will need to become accountable and compliant. I am pleased that hockey is one of the sports that is recognised for already being compliant."

Zimbabwe hockey has a long way to go before it is back in the halcyon days of the 1980s but the signs are there. It is recognised by its Olympic Committee; it has a clear development strategy that is showing results; and it has a number of people in place who are able to guide the sport onto the global stage.

For Bennett and the committee, getting international experience at both playing and organisational level is vital. Bennett is one of a several Zimbabweans who have been or currently are FIH officials at global events.

"It is definitely valuable for our officials to get an FIH appointment," says Bennett. "Local officials rely on it to keep up with the game. Our teams and our officials are not always up to speed with international developments because we don't compete internationally, so it is vital that we get these appointments and feed back."

It is not simply a lack of international experience that is stymying Zimbabwe's progress. Finance, or the lack of it, is a perennial problem. It is not just limited facilities, they rely on equipment donations from overseas and they are battling for resources with other sports.

But the forthcoming Hockey Series Open event is a bright spot on the horizon, which also emphasises what the future could look like.

"The HSO is providing a very positive image," says Bennett, who will be part of the team working to deliver the event.

"The stadium in Bulawayo will be packed and there will be a vibrant, sporting atmosphere. The schools will have just closed, it is a weekend, the place will be buzzing. There will also be interest from local companies. Anywhere in Africa, if you are hosting you will get buy in from local companies. Our message is that Zimbabwe hockey is open for business."