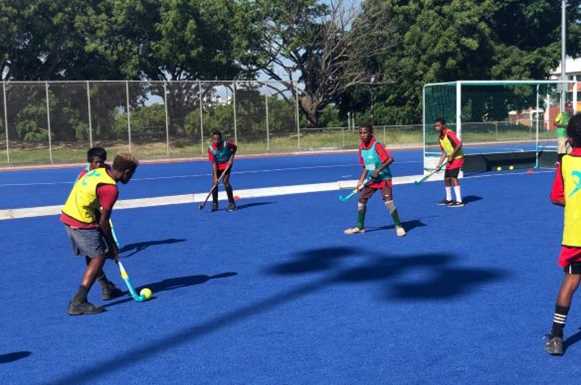 Hockey hooks into health and well-being in PNG

Hockey in the Pacific Island nation of Papua New Guinea (PNG) continues to grow as the wider hockey community shows its support through much needed equipment donations.

With its men’s and women’s teams currently ranked 56th and 53rd respectively in the FIH World Rankings, Papua New Guinea has been making big strides forwards in recent years at international level. In 2017, both the men’s and women’s teams experienced top class international hockey when they competed against the Oceania giants of the sport, Australia and New Zealand in the Oceania Cup.

Now, the PNG Hockey Federation, supported by the Oceania Hockey Federation (OHF), is working hard to make the sport accessible to all. The OHF is also looking to make hockey delivery in PNG sustainable and locally driven.

Notably, 58 participants, inclusive of men and women, from various PNG regions gained their FIH L1 Coaching Certificate and FIH L1 Foundation Umpire as a part of OHF facilitated sessions, while Gemming continued her outstanding work in the region coordinating sessions to build the capability of local teachers, coaches, umpires and officials.

PNG Hockey President Kaluwin Potuan said: “I am so pleased that people from all regions were able to attend these sessions – this is the best way for us to build local capability and grow the game in regional areas of PNG”.

Hockey Australia has also recognised the work being done in PNG and, in support of the movement, the national governing body has donated 40 Hookin2Hockey packs to PNG Hockey.

“We are really pleased that we are able to provide assistance and support in this way to Hockey in Papua New Guinea,” said Hockey Australia CEO Matt Favier.

“Part of our responsibility and duty is to grow the game not only domestically but to our Oceania neighbours, including PNG, so it is great to know the provision of these Hookin2Hockey packs has made a positive impact.”

“As a broader commitment, Hockey Australia will endeavour to continue providing gear in addition to the 200 packs being donated across 2019/20.”

It is not purely about hockey development on the island, OHF also aims to promote physical activity, inclusive participation and health using hockey as a medium.

OHF is working with Hockey Australia (including Masters), Papua New Guinea Hockey Federation, Aspire to be Deadly (Cairns Hockey Association), Family Planning (and their ‘in country’ service providers) and Flinders University to develop a collaborative approach that aims to better support the PNG community to ‘Hookin4Health’ and to ‘live well; learn well; lead well’.

With a focus on sustainable development programmes, the long-term aim is for locally designed hockey-based programmes to be delivered by hockey ambassadors from the local community. Hockey will provide a way of introducing young people, particularly females, to an integrated education and health service. There will also be a focus on supporting disabled people through hockey.

Highlighting the fun and inclusivity of hockey, during Prideaux and Gemming’s visit, PNG Hockey Federation also hosted an inclusive and Hockey 5s competition on their impressive water based synthetic pitch in Port Moresby that catered for more than 100 able bodied and disabled women, men and children.