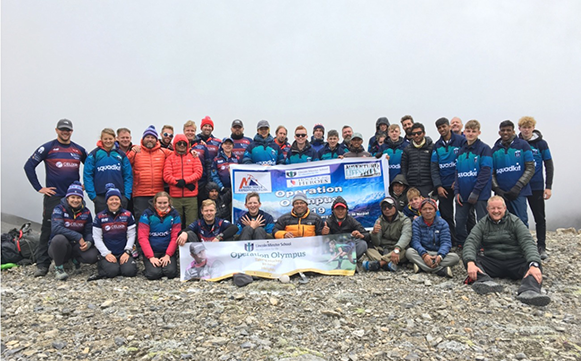 As reported by FIH.CH in July 2019, a team from the Hockey for Heroes charity and pupils from Lincoln Minster School in England set out on a life-changing adventure to the mountains of Nepal with two very clear goals: set a new Guinness World Record for the highest game of hockey ever played, and create a lasting hockey legacy in local community and schools.

We are thrilled to report that the magnificent endeavour known as ‘Operation Olympus’ was given formal ratification on Wednesday 27 May 2020, with their 60-minute hockey match, which was played at 5,019 metres above sea level, being officially announced as a Guinness World Record.

The record was achieved against the stunning backdrop of the Annapurna Mountain Range, eventually arriving at their target location after an arduous, energy-draining 40 hour, 51 kilometre trek that saw the team battling arduous road networks, landslides from intense rainstorms and low oxygen levels due to high altitude as they ascended the Annapurna Pass to its highest point.

Despite extreme tiredness and the greatly reduced oxygen levels, the team somehow found the energy to play their match in the hope of setting a new world record, something which has now been made 100% official. It will take some beating!

To ensure the group left a hockey legacy, they stopped off at several locations throughout the trip to donate hockey equipment and deliver coaching sessions to local community members and Schools. Over 100 community locals from Mutkinath played games and learned tricks from the group, while a visit to the Shree Janahit Secondary School, in Jomsom, provided students with the opportunity to be coached by group members before taking part in an organised tournament.

The group’s community efforts resulted in hundreds of children getting to play hockey for the first time, with many displaying an abundance of energy and excitement while using their hockey sticks and wearing playing shirts, including sticks, shirts and kit donated by Great Britain hockey squads.

The idea originated from a collaboration between Tom Eves of Lincoln Minster School and Gary Johnson from Hurricane Sports Foundation, a registered charity based in the city of Lincoln. Unfortunately, Gary was unable to complete the trip as he was experiencing symptoms of concussion after a fall.

Speaking about the achievement, Tom Eves described the challenge as “an emotional and physically exhausting adventure that changed the lives of Lincoln Minster School pupils, Hockey for Heroes members and 100s of Nepalese people. Friendships formed through adversity to create a group with its heart set on leaving a legacy of hockey in Nepal and setting a world record. This is a remarkable achievement that will be difficult to replicate.”

The Hockey for Heroes team raised funds for the Help for Heroes charity, while Andy Halliday – the England and Great Britain men’s Team Manager as well as being a Sports Ambassador for Hockey for Heroes and Lincoln Minster School – dribbled a hockey ball for the whole trek to raise money for young Lewis Whele, who suffers from Cerebral Palsy.

Halliday said: “Battling the altitude and fatigue was a struggle, but I’m very proud to have been part of the group, leaving a legacy for hockey in such a beautiful, vibrant country and reciprocating the fantastic hospitality provided by the Nepalese people.”

Congratulations to everyone involved!