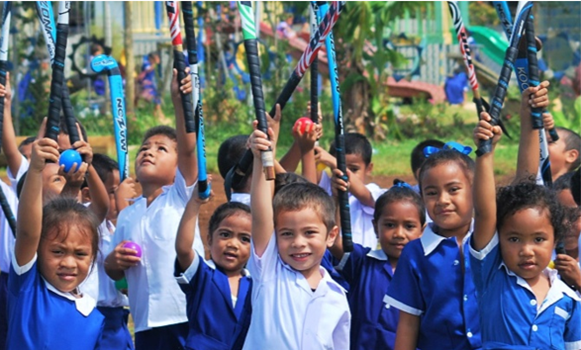 Hockey Development in the “Friendly Isles” of Tonga

Tonga is a Polynesian Kingdom of 170, largely uninhabited, islands in the Pacific Ocean. It is the smallest of the Oceania Hockey Federation members with a population of 108,000 and yet its promotion of hockey and the range of development programmes is vast.

This is laregly due to the drive and determination of hockey development officer Hiko Fungavaka. Hiko  worked as a sport development officer for TongaOlympic Committee, before taking up his full time hockey role in 2016. However, Hiko has continued to develop a relationship with TASANOC by having his office in their building, and making sure hockey is involved in all international days such as Olympic Day, International Sport for Development Day, Children’s Day, International Women’s Day and Disabilities Day. TASANOC has usually held its national celebration for Olympic Day off the main isalnd of Tongatapu in  Vava’u (2018) and Ha’apai (2019) which has enabled Hiko to geographically increase the spread of hockey.

Oceania Hockey Federation (OHF) recognised strategically that to really make a difference in growing hockey, indigenous development officers needed to be trained, employed and local, rather than flying experts in and out. With funding from FIH TAP and the Australian Government’s Pacific Sport Partnership, Hiko was able to be employed and supported by OHF.

Tonga is unique in that its early days of hockey exclusively supported females. The King saw the game played in Auckland, New Zealand and took a pack of equipment back to Nuku’alofa, the capital, and asked the Wesleyan Church to oversee the introduction of the sport for girls and women. It remained under the Church until 2014, when the Tongan Hockey Federation voted in a new Executive Board led by President Pilimilose Feke and adopted a new Constitution. The next steps were  to encourage boys and men to play. Both genders competing together for the first time at the 2015 Pacific Games in Papua New Guinea.

Hiko has enlisted two national representative volunteers – Vahe Paeamoana and Melesuka Manumu’a to help him in his very successful school visit programme. During February and March 2020, 2769 (1199 boys and 1570 girls) primary children were given an opportunity to play hockey, which is a huge increase on 2019 pilot programme where 653 ( 295 boys and358 girls) primary children received an introduction to hockey.

One of the major changes has been the willingness of schools to incorporate hockey sessions into their physical education programme. The additional benefit has been that teachers who previously had little experience of hockey have been involved and trained.

One school, Holongo Primary School, has really embraced the sport and building a hockey field is planned for later this year. There is no hockey field available currently, and the national teams have had to train on a basketball court belonging to Tonga High School.

In November 2019, to celebrate Children’s Day, Hiko and Vahe ran the first ever Primary and Secondary School Championships with huge success. They managed to just get this completed as a day later the schools closed for the measles epidemic, and this week the schools are again closed for COVID 19.

Hiko has also been proactive in introducing a group of disabled participants to hockey. His numbers have grown to 25 and they have an eight week programme operating from the Indoor Stadium. With the help of Lance Forkgen and Eagle Sports, OHF has been able to source a lighter, bigger ball that suits both the long grass for primary visits and does not get caught under wheelchairs. This bigger ball allows for more goals to be scored, which is always a plus.

COVID 19 has put a dent in Hiko’s plans to start his secondary school programme which included 1,997 participants last year, however he has taken the opportunity to plan new workshops for 18 new coaches  that completed their FIH Level 1 Course last year,  as well as planning new participation programmes that will be ready to launch once the COVID 19 lockdown is lifted.

Hiko is an inclusive and calm leader who creates safe and peaceful environments with communities in Tonga that allow children to work together while learning new skills, increasing their physical activity; improving their well being and gaining benefits socially through hockey.