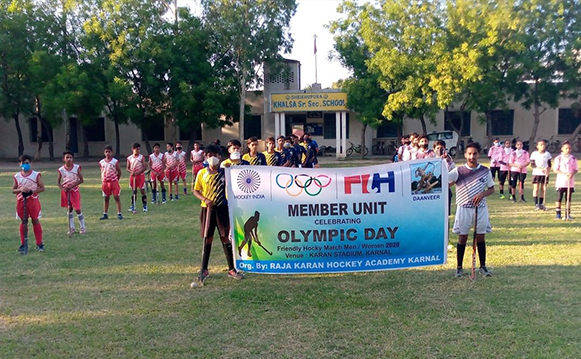 Global hockey community united in its support of Olympic Day

Were these normal times then the hockey world would have been in a high state of anticipation with just over a month to go before the Olympic Games Tokyo 2020 got underway. The IOC’s national day of celebration in Olympic year is a fantastic prelude to the main event.

But, although these are far from normal times, the international hockey community has pulled out all the stops when it comes to celebrating the greatest multi-sport show of them all. Hockey players and hockey fans from across the world showed innovation, creativity and a determination to celebrate the annual IOC Olympic Day with a whole range of hockey-focused events and activities.

Central to the hockey activities were the three themes of this year’s IOC campaign: #StayStrong, #StayHealthy and #StayActive. All three – mental strength, healthy living and getting fit – are particularly pertinent to people across the globe right now, as just about everyone has been impacted by the Covid-19 pandemic.

In the Pacific Islands, the National Associations of Tonga and Vanuatu organised hockey activities in some of the smaller village communities that lie just outside the city.

Neighbouring Tonga saw the Tonga Hockey Federation join forces for the fourth consecutive year with the National Olympic Committee (TASANOC) to run activities that promoted Olympic values. Hockey players of all abilities came together with participants from a wide range of other Olympic sports in events organised by sports federations. There was also a hockey festival for primary school children, which was the culmination of several weeks of coaching activity – that had taken place before lockdown was imposed.

In Pakistan, national team players past and present were encouraged to communicate with fans around the themes highlighted during Olympic Day. Using video clips, online discussions and written messages, the athletes demonstrated their stick and ball skills and shared their online fitness training tips. Olympians were asked to write essays of up to 300 words about their own experiences of the Olympics.

Also in Asia, the Chinese Taipei Hockey Association was in a position to bring people together to enjoy playing hockey. To mark Olympic Day, the National Association held a series of competitions for people ranging in age from 10-55, with participants of all levels having a go at the sport.

Things got very artistic in Paraguay as the Paraguay Hockey Federation published a series of flyers showing how hockey can help people get, and stay, fit and healthy. The message was loud and clear – hockey is good for the mind and body.

Another PAHF nation, Argentina, has a proud tradition at the Olympics and this was summed up by a message posted on social media by Las Leonas superstar Delfina Merino. Two images – the Olympic Hoops and the pitch at the Olympic Games in Rio in 2016 – combined with the simple message: ‘Feliz dia Olympic’.

Across the European Hockey Federation, individual athletes and teams took to social media to spread the Olympic Day message. The French Federation called on its athletes to send video messages supporting the IOC campaign of #StayStrong, #StayHealthy and #StayActive. Alyson Annan, Head Coach of the Netherlands posted an image of the gold medal winning Australia team from the 2000 Sydney Olympics, with the words: “A privilege and a honour to be part of such a great team.”

In the Czech Republic, the National Association held a two-day hockey camp for U18 girls. Development officer Karolina Paterson explained that the camp was not purely about playing hockey but was aligned to the wide message of living a healthy lifestyle and keeping fit both physically and mentally.

Meanwhile, in the African nation of Botswana, the message was clear and simple. All forms of social media were harnessed by the Botswana Hockey Association to push out powerful videos that showed that hockey is very much a sport to be enjoyed by everyone.

And in South Africa, the National Association was delighted to receive more than 400 video clips in response to its request for members of the hockey family to post video clips of themselves staying active. At the same time, across the nation, schools participated in a national online competition where participants could show case their skills.

We might have to wait a while longer for the Olympic Games to burst into action in Tokyo, but this Olympic Day has shown that the appetite for Olympic action within the hockey community is as strong as ever.