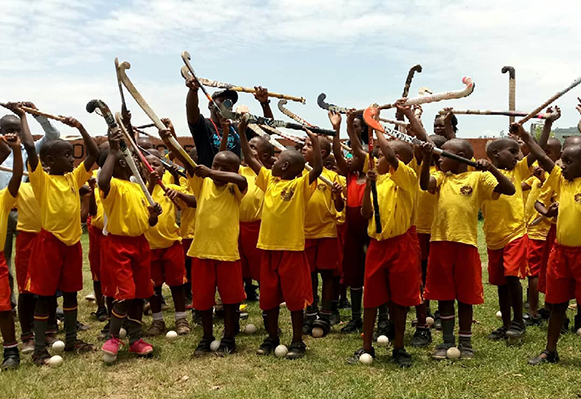 Back in 2010, Innocent Mbabali was still a student at the local high school in Naguru, a town in Uganda, but he had a dream or an ambition that drove him in a way that is exceptional for a young lad of his age.

“I wanted to change children’s lives through hockey,” says Innocent, who set about this task with just 12 hockey sticks and the help of his brother Lawrence.
“Our aim was to bring together children living in slum areas through the sport of hockey. We wanted to reduce the increasing crime rates, drug use, school drop outs and inequality,” he adds.

“We also wanted to empower girls, because the environment we were coming from didn’t allow or encourage sports participation among girls.”

Ten very busy and successful years later and the Hope for Sports Foundation is a thriving social enterprise which runs a huge variety of programmes aiming to introduce and develop hockey among the Ugandan youth. Hockey 5s, mixed hockey camps, female-only camps, life skills courses are among the vehicles that Innocent and his team use to break through many of the barriers facing children from deprived areas.

More than 12,000 children have now passed through the programme, which operates in four areas of Uganda: Kampala, Mbarara, Kabale and Kumi. Courses are delivered by a team of six senior coaches and four junior coaches, with regular visits from guest coaches from around the world. There are expansion plans to spread the reach of the charity even further.

While hockey is the vehicle, the outcomes are wider. Children are encouraged and motivated to study hard and raise their academic expectations. The programmes focus on life skills such as discipline, team work, leadership, accountability, integrity and the value of ongoing education. 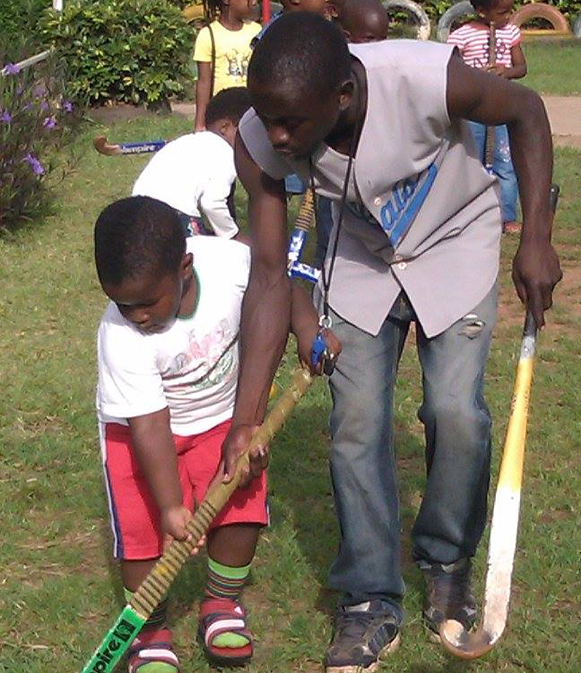 The programme is delivering both hockey excellence and academic success. Since 2016, 20 players have joined adult clubs and represented Uganda at U19 level. More than 80 players are regular players for their school teams and 23 players represent their university sides. Of the children that joined the programme more than 50 have secured academic scholarships.

It is with understandable pride that Innocent says: “The programme has developed relationships with various schools, coaches and scouts within the continent and overseas. Our programme is regularly sought out by scouts and coaches in search of new talent for their respective teams. The foundation is steadily gaining a reputation as a talent hub for hockey players.”

Like all charitable foundations working in deprived areas, the Hope for Sports Foundation is always seeking new income streams. Equipment is donated by supporters from across the international community. There was also support from the Hockey Dreams Foundation, which was invaluable to setting and running up the charity. Innocent and his team are now pushing ahead with their plans for the future, and are speaking to a number of international organisations to secure funding.

Among those plans are: developing facilities in the areas where the foundation is operating; creating a head office from which to run the organisation; develop competition opportunities; to create exchange visits with volunteer coaches; promoting hockey for children with disabilities; and providing good nutrition for the national team players.

The scope and vision is huge, given the challenges that stand in the way but Innocent and his team live by a simple but powerful mantra: “At Hope for Sports Uganda Hockey Foundation we believe it’s possible to achieve whatever one pursues in life for as long as one puts in work, focus and determination.”
Back