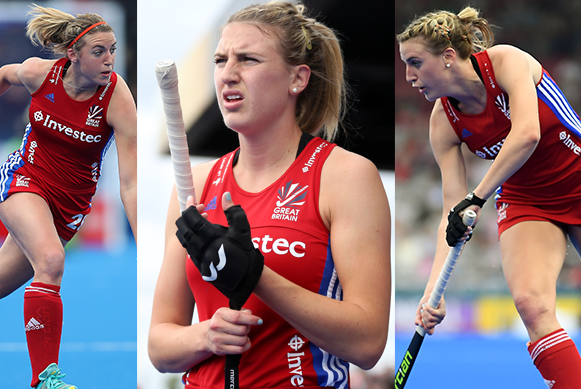 From reluctant pupil to gold medalist

When Lily Owsley receives the ball and sets off on a characteristically forceful run towards goal, there is a palpable sense that anything could happen. The attacking midfielder is a force of nature on the pitch and a lively and likeable character off it. She has graduated from being one of the younger members of an established squad into one of the leading members of a developing group of players and her experience as a gold medal-winning Olympian that will be invaluable as Great Britain prepare to defend their crown in Tokyo in a year’s time.

Owsley was named FIH Rising Star in 2015 and has a gold medal from both the 2015 EuroHockey Championships – where she scored in the final – and the 2016 Rio Olympic Games.

The 25-year-old was in a relaxed mood as she chatted to her brother Freddie about how hockey had not been her choice of sport as a youngster and how coffee mornings have continued throughout lock-down, albeit virtually.

Who or what first influenced you to pick up a stick and play hockey?
Lily Owsley: It was actually mandatory at my new secondary school to play hockey. I loved football and athletics and hockey was not something I knew about or had ever played and I don't like doing things I am not good at – which is why I am not a swimmer! It took me quite a while to get into it. I started playing at the age of 13 or 14 which was relatively quite late but then it didn’t take me very long to start loving the game.

Who has been the biggest influence on your career?
Lily Owsley: I would have to say my family, despite them not knowing much, if anything, about hockey. They give me so much perspective and such good support. They taught me there are way more important things than sport, and that gives me a good perspective going into games. Whether we win or lose, I know there are more important things in life and that keeps me grounded.

If there was a sentence to sum up your playing style or attitude, what would it be?
Lily Owsley: “I have to say aggressive, fast and direct. Definitely direct.”

What moment on the pitch are you most proud of and why?
Lily Owsley: “I think I would have to say when we won the Europeans back in 2015 that was my proudest team moment. It was the first gold we had won as that squad and it was only a year out from the Rio Olympics so it gave us that motivation and belief that we could do something very special and that Olympic gold wasn't too far out of reach. That was a real turning point in the squad and that makes me incredibly proud.”

The Covid-19 situation has obviously impinged on everyone’s preparations, but what are examples of activities that your squad have used to keep a sense of team throughout the lockdown period?
Lily Owsley: “We have been doing quite a lot as a squad. We have been doing Zoom calls, little cups of tea on a Friday morning. We have obviously kept doing our meetings with coaches and support staff but as a group we have  done quizzes, fancy dress, lots of Yoga (led by Grace Balsdon) so it's been great. More recently we have been doing meditation and breathing stuff but I have been missing them a lot.

What part of returning to play after this enforced break are you most looking forward to?
Lily Owsley: “Definitely matches. I don't love training every day, I just do training to get to the matches. My training is driven by the excitement of actually playing. I am very competitive by nature, and winning is my drive. So definitely matches because that is where I get my buzz from, and my love of hockey.

How have you changed as a player since Rio 2016?
Lily Owsley: “I think massively. When I look back I don’t really recognise the player I was pre 2016. I feel like my role has changed within the squad. A lot of players retired after Rio so I got thrown from being the baby to taking a more senior role in the team. And with that comes a lot more responsibility, which I have absolutely loved.
The biggest change is that I moved position from forward to midfield and the things I described earlier about aggressive, fast and direct [play] is far more impactful from the midfield. And there is more space for me to get going, where I didn't have that space and open game play from the forward line. So shifting position and more responsibility.